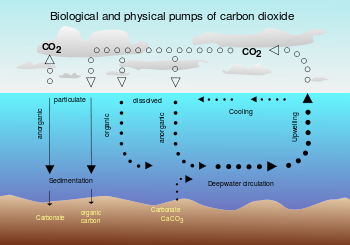 The biological pump, in its simplest form, is the ocean’s biologically driven sequestration of carbon from the atmosphere to the deep sea.[1] It is the part of the oceanic carbon cycle responsible for the cycling of organic matter formed by phytoplankton during photosynthesis (soft-tissue pump), as well as the cycling of calcium carbonate (CaCO3) formed by certain plankton and mollusks as a protective coating (carbonate pump).[2]

The biological pump can be divided into three distinct phases,[3] the first of which is the production of fixed carbon by planktonic phototrophs in the euphotic (sunlit) surface region of the ocean. In these surface waters, phytoplankton use carbon dioxide (CO2), nitrogen (N), phosphorus (P), and other trace elements (barium, iron, zinc, etc.) during photosynthesis to make carbohydrates, lipids, and proteins. Some plankton, (e.g. coccolithophores and foraminifera) combine calcium (Ca) and dissolved carbonates (carbonic acid and bicarbonate) to form a calcium carbonate (CaCO3) protective coating.

Once this carbon is fixed into soft or hard tissue, the organisms either stay in the euphotic zone to be recycled as part of the regenerative nutrient cycle or once they die, continue to the second phase of the biological pump and begin to sink to the ocean floor. The sinking particles will often form aggregates as they sink, greatly increasing the sinking rate. It is this aggregation that gives particles a better chance of escaping predation and decomposition in the water column and eventually make it to the sea floor.

The fixed carbon that is either decomposed by bacteria on the way down or once on the sea floor then enters the final phase of the pump and is remineralized to be used again in primary production. The particles that escape these processes entirely are sequestered in the sediment and may remain there for thousands of years. It is this sequestered carbon that is responsible for ultimately lowering atmospheric CO2.

The first step in the biological pump is the synthesis of both organic and inorganic carbon compounds by phytoplankton in the uppermost, sunlit layers of the ocean.[4] Organic compounds in the form of sugars, carbohydrates, lipids, and proteins are synthesized during the process of photosynthesis:

In addition to carbon, organic matter found in phytoplankton is composed of nitrogen, phosphorus and various other trace metals. The ratio of carbon to nitrogen and phosphorus varies little and has an average ratio of 106C:16N:1P, known as the Redfield ratio. Trace metals such as magnesium, cadmium, iron, calcium, barium and copper are orders of magnitude less prevalent in phytoplankton organic material, but necessary for certain metabolic processes and therefore can be limiting nutrients in photosynthesis due to their lower abundance in the water column.[3]

Oceanic primary production accounts for about half of the carbon fixation carried out on Earth. Approximately 50-60 Pg of carbon are fixed by marine phytoplankton each year despite the fact that they comprise less than 1% of the total photosynthetic biomass on Earth. The majority of this carbon fixation (~80%) is carried out in the open ocean while the remaining amount occurs in the very productive upwelling regions of the ocean. Despite these productive regions producing 2 to 3 times as much fixed carbon per area, the open ocean accounts for greater than 90% of the ocean area and therefore is the larger contributor.[3]

Carbon is also biologically fixed in the form of calcium carbonate (CaCO3) used as a protective coating for many planktonic species (coccolithophores, foraminifera) as well as larger marine organisms (mollusk shells). While this form of carbon is not directly taken from the atmospheric budget, it is formed from dissolved forms of carbonate which are in equilibrium with CO2 and then responsible for removing this carbon via sequestration.[5]

While this process does manage to fix a large amount of carbon, two units of alkalinity are sequestered for every unit of sequestered carbon, thereby lowering the pH of surface water and raising atmospheric CO2.[2][6] The formation and sinking of CaCO3 drives a surface to deep alkalinity gradient which serves to raise the partial pressure of dissolved CO2 in surface waters and actually raise atmospheric levels. In addition, the sequestration of CaCO3 serves to raise overall oceanic alkalinity and again raise atmospheric levels.[1]

The vast majority of carbon incorporated in organic and inorganic biological matter is formed at the sea surface and then must sink to the ocean floor. A single phytoplankton cell has a sinking rate around 1 m per day and with 4000 m as the average depth of the ocean, it can take over ten years for these cells to reach the ocean floor. However, through processes such as coagulation and expulsion in predator fecal pellets, these cells form aggregates. These aggregates, known as marine snow, have sinking rates orders of magnitude greater than individual cells and complete their journey to the deep in a matter of days.[3]

Of the 50-60 Pg of carbon fixed annually, less than 0.5% of that reaches the sea floor.[3] Most is maintained in regenerated production in the euphotic zone and a significant portion is removed in midwater processes during particle sinking. The portion of carbon that makes it to the sea floor becomes part of the geologic record and in the case of the calcium carbonate, may form large deposits and resurface through tectonic motion as in the case with the White Cliffs of Dover in Southern England. These cliffs are made almost entirely of the plates of buried coccolithophores.

As the biological pump plays an important role in the Earth's carbon cycle, significant effort is spent quantifying its strength. However, because they occur as a result of poorly constrained ecological interactions usually at depth, the processes that form the biological pump are difficult to measure. A common method is to estimate primary production fuelled by nitrate and ammonium as these nutrients have different sources that are related to the remineralisation of sinking material. From these it is possible to derive the so-called f-ratio, a proxy for the local strength of the biological pump. Applying the results of local studies to the global scale are complicated by the role the ocean's circulation plays in different ocean regions.[7]

The biological pump has a physico-chemical counterpart known as the solubility pump. For an overview of both pumps, see Raven & Falkowski (1999).[8] 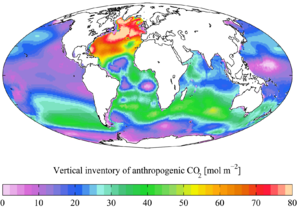 It was recently determined that coccolithophore concentrations in the North Atlantic have increased by an order of magnitude since the 1960s and an increase in absorbed CO2, as well as temperature, were modeled to be the most likely cause of this increase.[9]

Changes in land use, the combustion of fossil fuels, and the production of cement have led to an increase in CO2 concentration in the atmosphere. At present, about one third (approximately 2 Pg C y−1 = 2 × 1015 grams of carbon per year)[10][11] of anthropogenic emissions of CO2 are believed to be entering the ocean. However, the biological pump is not believed to play a significant role in the net uptake of CO2 by oceans. This is because the biological pump is primarily limited by the availability of light and nutrients, and not by carbon. This is in contrast to the situation on land, where elevated atmospheric concentrations of CO2 may increase primary production because land plants are able to improve their water-use efficiency (= decrease transpiration) when CO2 is easier to obtain.[12] However, there are still considerable uncertainties in the marine carbon cycle, and some research suggests that a link between elevated CO2 and marine primary production exists.[13]

However, climate change may affect the biological pump in the future by warming and stratifying the surface ocean. It is believed that this could decrease the supply of nutrients to the euphotic zone, reducing primary production there. Also, changes in the ecological success of calcifying organisms caused by ocean acidification may affect the biological pump by altering the strength of the hard tissues pump.[14] This may then have a "knock-on" effect on the soft tissues pump because calcium carbonate acts to ballast sinking organic material.[15]