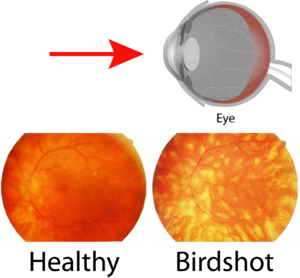 Birdshot chorioretinopathy is a rare form of bilateral posterior uveitis affecting the eye. It causes severe, progressive inflammation of both the choroid and retina.

Affected individuals are almost exclusively caucasian and usually diagnosed in the fourth to sixth decade of their lives.[1]

In 2014, Kuiper et al conducted a genome-wide association study in birdshot chorioretinopathy and studied the entire genome of Dutch, Spanish and English patients. The GWAS identified, in addition to HLA-A29, the endoplasmic reticulum aminopeptidase (ERAP) 2 gene strongly associated with birdshot chorioretinopathy.[4] Genetic variants near ERAP2 on chromosome 5 resulted in high mRNA and protein expression of this aminopeptidase in BSCR patients. ERAP2 is an aminopeptidase that, together with the closely related ERAP1, trims peptides in the endoplasmic reticulum and loads these peptides on HLA molecules for presentation to T cells of the immune system. ERAP-HLA associations have also been reported in Ankylosing spondylitis and Behcet's disease, suggesting shared pathogenic pathways among these diseases.

Symptoms of this disorder include floaters, blurred vision, photopsia (flashing lights in eyes), loss of color vision and nyctalopia. In an eye examination, light-colored spots on the retina are seen. Complete loss of visual acuity may happen.

The name of the condition comes from the small light-colored fundus spots on the retina, scattered in a pattern like birdshot from a shotgun, but these spots might not be present in early stages.

Birdshot chorioretinopathy may show resistance to treatment. Immunosuppressant therapy along with oral corticosteroid has been somewhat effective in slowing down the progressive inflammation associated with the disorder, preserving visual integrity as much as possible. Long-term use of such medications must be closely monitored, however, due to the discomforting and potentially debilitating and life-threatening side-effects.[5][5][6]

Immunosuppressive drugs such as the therapeutic monoclonal antibody Daclizumab, Cyclosporine and Methotrexate have proven to be effective treatment options for birdshot chorioretinopathy. Substantial reduction and even stabilization of both vitreous inflammation and retinal vasculitis have been evident via electroretinography, during daclizumab (IL-2 receptor blocker) therapy. This is also supported by the observation of elevated levels of IL-2 in the eyes of patients.[2] Loss of visual acuity unrelated to the inflammation caused by the disorder, however, often remains unchanged despite usage of the drug. This is reflected by the lack of difference in visual acuity and the vision-related quality of life among various treatment categories in birdshot patients.[7] Contraindications and adverse side-effects are always a factor, as well.[8]