From Infogalactic: the planetary knowledge core
(Redirected from Bissu)
Jump to: navigation, search 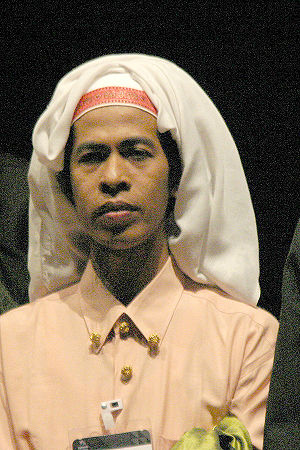 A Bissu, usually took the role as medicine man, sorcerer or medium with spiritual realm in traditional Bugis society. Bissu are also involved in traditional performance such as I la Galigo.

The Bugis people of Indonesia divide their society into five separate genders. Two are analogous to cisgender male (oroané) and female (makkunrai), and the remaining three are not easily comparable to Western ideas of gender: bissu, calabai, and calalai. The latter two could roughly be compared to transgender females and males respectively, whereas bissu is a more abstract identity.

Bissu is one of the five genders of the Bugis, an Indonesian ethnic group. There are divergent theories regarding the definitive origins and meaning of "gender transcendent", as the bissu are commonly called.[1]

To be considered bissu, all aspects of gender must be combined to form a whole. This can include those who are born intersexed. However, being bissu does not necessarily mean one does not possess only fully functioning male or female sexual organs, or even that one would not be called a cisgender male or female outside of Bugis society.[2]

The role of the bissu (along with the other gender roles not normally found in Western society) exist in Bugis society because it is a cultural belief that all five genders must harmoniously coexist.

The advice of bissu is typically sought when a particular approval from the powers of the batin world is required. This may, for example, be the situation when a Bugis person is departing Sulawesi for the Hajj, the compulsory pilgrimage to Mecca. In that situation the bissu will permit an excellent djinn to seize them and to proceed as an emissary of the batin.

This is not in keeping with traditional Islam, but it has been tolerated by the regional Muslim establishment on condition that it does not comprise any act that is evidently in opposition to the Sharia. In this exceptional case, it means that the spirit and the Bissu's powers should not be measured as in any way autonomous from Allah’s power, because he is the only one who is to be venerated.

In daily social life, the bissu, along with the calabai and the calalai, are authorized to enter the women’s parts of the dwellings and villages in addition to the men's.

Calabai is another of the five genders of the Bugis. According to the Bugis gender system, a calabai is a 'false woman'. Therefore, these people are generally assigned male at birth but take on the role of a heterosexual female. The fashions and gender expression of Calabai individuals are distinctly feminine, but do not match that of the "typical" cis-gendered woman.

"If there is to be a wedding in Bugis society, more often than not calabai will be involved in the organization. When a wedding date has been agreed upon, the family will approach a calabai and negotiate a wedding plan. The calabai will be responsible for many things: setting up and decorating the tent, arranging the bridal chairs, bridal gown, costumes for the groom and the entire wedding party (numbering up to twenty-five), makeup for all those involved, and all the food. Rarely did I attend a village wedding with less than a thousand guests. On the day, some calabai remain in the kitchen preparing food while others form part of the reception, showing guests to their seats."[Sharyn Graham]

In contrast to Calabai, calalai refers to a person who is assigned female at birth but takes on the roles of a heterosexual male in the Bugis society. Calalai dress and present themselves as men, hold masculine jobs, and typically live with female partners to adopt children.[3]