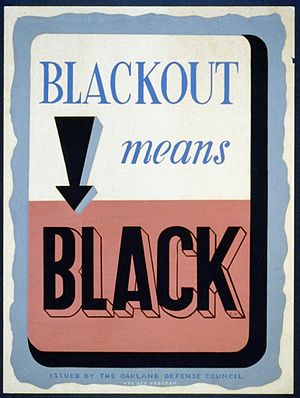 A blackout during war, or in preparation for an expected war, is the practice of collectively minimizing outdoor light, including upwardly directed (or reflected) light. This was done in the 20th century to prevent crews of enemy aircraft from being able to identify their targets by sight, for example during the London Blitz of 1940. In coastal regions a shore-side blackout of city lights also helped protect ships from being seen in silhouette against the shore by enemy submarines farther out at sea.

In actual warfare, according to M. R. D. Foot, blackouts do not impair navigation by bombers because navigators focused more on reflected bodies of water, railroad tracks, or large highways. The chief purpose is to mobilize the entire civilian population, and provide a test to make sure they are obeying the rules.[1]

During World War II, the Air Ministry had forecast that Britain would suffer night air bombing attacks causing large numbers of civilian casualties and mass destruction. It was widely agreed that navigation and targeting would be more difficult if man-made lights on the ground could be extinguished. As early as July 1939, Public Information Leaflet No 2 (part of the Air Raid Precautions (A.R.P.) training literature) warned of the need for popular discipline to ensure that the blackout regulations were fully enforced during the blackout periods.[2]

Blackout regulations were imposed on 1 September 1939, before the declaration of war. These required that all windows and doors should be covered at night with suitable material such as heavy curtains, cardboard or paint, to prevent the escape of any glimmer of light that might aid enemy aircraft. The Government ensured that the necessary materials were available.[2] External lights such as street lights were switched off, or dimmed and shielded to deflect light downward. Essential lights such as traffic lights and vehicle headlights were fitted with slotted covers to deflect their beams downwards to the ground.[3]

Shops and factories had particular problems. Factories with large areas of glass roofing found it impossible to install temporary blackout panels and permanent methods (such as paint) lost natural light during daylight. Shops had to install double "airlock" doors to avoid lights showing as customers arrived and departed.[2]

Blackouts proved one of the more unpleasant aspects of the war, disrupting many civilian activities and causing widespread grumbling and lower morale.[4]

The blackout was enforced by civilian ARP wardens who would ensure that no buildings allowed the slightest chink or glow of light.[5] Offenders were liable to stringent legal penalties.[2]

Blackout restrictions greatly increased the dangers of night driving and fatalities increased as a consequence. As a result, some aspects were relaxed and speed limits were lowered. The anticipated increase in crime rates did not occur.[2]

As German war-making capability declined, a "Dim-out" was introduced in September 1944, which allowed lighting to the equivalent of moonlight. A full Blackout would be imposed if an alert was sounded. Full lighting of streets was allowed in April 1945; on 30 April, the day Hitler committed suicide, Big Ben was lit 5 years and 123 days after the Blackout was first imposed.[2]

The United States was not exposed to air attack, but along the Atlantic coast, the lack of a coastal blackout served to silhouette Allied shipping and thus expose them to German submarine attack. Coastal communities resisted the imposition of a blackout for amenity reasons, citing potential damage to tourism. The result was a disastrous loss of shipping, dubbed by German submariners as the "Second Happy Time".[6] Blackouts were held in mainland cities, and along the coastal areas long after any enemy threat existed; the primary purpose was psychological motivation of the civilian population which saw blackouts as a patriotic duty.

Light can simply be turned off or light can sometimes be minimized by tarring the windows of large public structures. In World War II, a dark blackout curtain was used to keep the light inside. Tarring the windows can mean a semi-permanent blackout status.

During the 1940s and 1950s, cities such as Detroit would practice blackout air raid drills. During this time, the city's Civil Defense workers would immediately activate the neighborhood air raid siren and families would be required to do the following in order:

The benefits of blackouts against air attack are now largely nullified in the face of a technologically sophisticated enemy. As early as World War II, aircraft were using radio-beam navigation (see "Battle of the Beams"), and targets were detected by air-to-ground radar, (e.g. H2X). Today, not only are night-vision goggles readily available to air crews, but sophisticated satellite-based and inertial navigation systems enable a static target to be found easily by aircraft and guided missiles.