The Blackstone River is a river in the U.S. states of Massachusetts and Rhode Island. It flows approximately 48 mi (80 km) and drains a watershed of approximately 540 sq. mi (1,400 km²). Its long history of industrial use has left a legacy of pollution, and was characterized by the United States Environmental Protection Agency in 1990 as "the most polluted river in the country with respect to toxic sediments."[1]

The river is named after William Blackstone (original spelling William Blaxton) who arrived in Weymouth, Massachusetts in 1623, and became the first settler of present-day Boston in 1625. He relocated again, to Rhode Island in 1635 and built his home on the river, in what would become Cumberland. With the Providence River, the Blackstone was the northeastern border of Dutch claims for New Netherland from Adriaen Block's charting of Narragansett Bay in 1614 through the Hartford Treaty of 1650.

The original Native American name for the river was the "Kittacuck", which meant "the great tidal river". The "Kittacuck", or Blackstone, was plentiful with Salmon and Lamprey in pre-colonial and colonial times.[2]

In 1790, Samuel Slater opened the first successful water powered cotton mill in America, Slater Mill, at Pawtucket Falls. This mill was powered by the waters of the Blackstone River. Many other mills appeared along the Blackstone River over time making it an important part of American industry. The industrialization also led to the river being identified by the end of the 20th century as the primary source of Narragansett Bay pollution.[3]

In August 1955, severe flooding on the Blackstone caused extensive damage to Woonsocket, Rhode Island. Where the river is usually 70 feet (21 m) wide it swelled to over 1 mile (1.6 km) wide.[citation needed] The flooding of the Blackstone was the result of a succession of dam breaks and was caused by rainfall from Hurricane Connie followed a week later by Hurricane Diane, which together deposited over 20 inches (510 mm) of rain in parts of Rhode Island and Massachusetts.[4] The Blackstone river reached a stage of 21.8 feet (6.6 m) in Woonsocket, which remains the flood of record; flood stage is 9.0 feet (2.7 m).[5]

The river, together with the Woonasquatucket River to the south, was designated an American Heritage River in 1998.

The river is formed in Worcester, Massachusetts by the confluence of the Middle River and Mill Brook. From there, it follows a rough southeast course through Millbury, Sutton, Grafton, Northbridge, Uxbridge, Millville, and Blackstone. It then continues into Rhode Island, where it flows through Woonsocket, Cumberland, Lincoln, Central Falls, and Pawtucket, where the river then reaches Pawtucket Falls. After that, the river becomes tidal, and changes its name to the Seekonk River. Other tributaries join the Blackstone along the way, such as the West and Mumford River, at Uxbridge, and The Branch River in North Smithfield.

The Blackstone River has a long association with industry, and a legacy of pollution as a result. By 1900 the river was already considered polluted and the Massachusetts Department of Public Health said in a report, "The Department finds that the condition of the Blackstone River is offensive throughout its course, from Worcester to the state line at Blackstone. The condition of the stream is likely to grow worse until effective measures are completed for removing from the river much of the pollution which it now receives."[6] Little was actually done to abate this pollution for the next 72 years, until the passage of the Clean Water Act began to spur some action on the part of States and the Federal Government to clean up polluted rivers and streams. Progress was slow, and as recently as 1990, the United States Environmental Protection Agency called the Blackstone, "The most polluted river in the country with respect to toxic sediments."[1]

Early industries discharged a variety of pollutants into the river including dyes from textile mills and heavy metals and solvents from metal and woodworking industries.[6] Much of this early pollution lies trapped in sediments behind historic dams on the river and continues to affect the ecosystem today. Much recent pollution can be traced to the Upper Blackstone Water Pollution Abatement District (UBWPAD), the wastewater treatment plant for Worcester, Massachusetts and surrounding communities, which discharges into the Blackstone. A 2005 report written by the Rhode Island Department of Environmental Management said, ". . . [the] UBWPAD, North Attleboro, and Attleboro WWTFs play a significant role in the ability to improve water quality in the Providence and Seekonk River system [into which the Blackstone discharges], and efforts to reduce their nitrogen inputs should be initiated as soon as possible."[7] In September 2010, the Conservation Law Foundation, citing this report, filed a lawsuit claiming that the discharge permit issued to the UBWPAD by the Environmental Protection Agency is not "sufficient to meet state water quality standards."[8]

River cleanup is still underway, and today the Blackstone is considered a Class C river (suitable only for "secondary contact" activities like boating) for much of its length.[9] 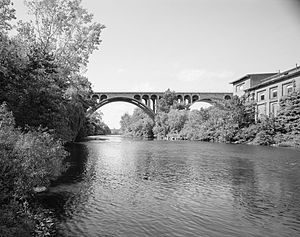 Below is a list of all crossings over the Blackstone River. The list starts at the headwaters and goes downstream.

In addition to many unnamed tributaries, the following brooks and rivers feed the Blackstone: