Blair House is a historic building in Washington, D.C. that forms part of the President's Guest House complex. The complex itself is also sometimes known as "Blair House" in reference to this, the oldest of its four constituent structures, constructed in 1824.[2] 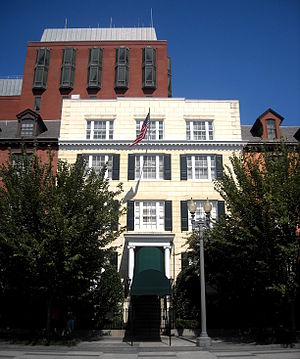 The facade of Blair House, pictured in 2009.

The original brick house was built as a private home for Joseph Lovell, eighth Surgeon General of the United States Army. In 1836, it was acquired by Francis Preston Blair, a newspaper publisher and influential advisor to President Andrew Jackson. It remained in his family for the following century.[2]

Francis Blair's son Montgomery Blair succeeded his father as resident of Blair House. Montgomery Blair was Postmaster General in Lincoln's administration; at a conference at Blair House in 1861, it was decided that Admiral David Farragut would command the assault on New Orleans during the American Civil War.[3]

In 1942, the house was purchased by the U.S. government for use as a guest residence for visiting dignitaries.[2] The purchase was prompted in part by a request from Eleanor Roosevelt who was put off by Winston Churchill's casual familiarity during his White House visits.[4] Once, Churchill attempted to enter Franklin Roosevelt's private apartments at 3:00 AM to wake the president for a conversation.[5]

During much of the presidency of Harry Truman, Blair House served as the temporary residence of the president of the United States, while the interior of the White House was being renovated.[6] On November 1, 1950, Puerto Rican nationalists Griselio Torresola and Oscar Collazo attempted to assassinate President Truman in Blair House.[6] The assassination was foiled, in part by White House policeman Leslie Coffelt, who killed Torresola but was mortally wounded by him.[6]

Blair House was designated a national historic landmark in 1973 (other buildings in the President's Guest House complex have been separately recognized as landmarks).

Between the 1950s and 1980s, Blair House was internally reconfigured to seamlessly attach it to the nearby Lee House and Peter Parker House, as part of the creation of the President's Guest House complex.