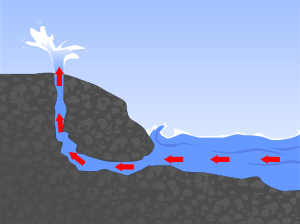 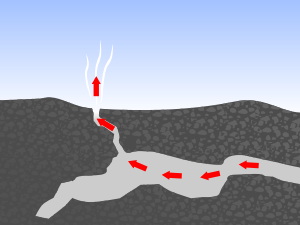 In geology, a blowhole is formed as sea caves grow landwards and upwards into vertical shafts and expose themselves towards the surface, which can result in blasts of water from the top of the blowhole[1] if the geometry of the cave and blowhole and state of the weather are appropriate.[2]

Blowholes are likely to occur in areas where there are crevices, such as lava tubes, in rock along the coast.[3] These areas are often located along fault lines and on islands.[3] As powerful waves hit the coast, water rushes into these crevices and bursts out in a high pressured release.[3] It is often accompanied by a loud noise and wide spray, and for this reason, blowholes are often sites of tourism.[3]

Blowholes have the capacity to change the topography near their locations. Blowholes can eventually erode the area surrounding the crevices to form larger sea caves.[4] In some instances, the cave itself may collapse.[4] This event may create shallow pools along the coast.[5]

A blowhole is also the name of a rare geologic feature in which air is blown through a small hole at the surface due to pressure differences between a closed underground system and the surface. The blowholes of Wupatki National Monument are an example of such a phenomenon. It is estimated that the closed underground passages have a volume of at least seven billion cubic feet. Wind speeds can approach 30 miles per hour.[2] Another well known example of the blowhole is the natural entrance to the Wind Cave[6]