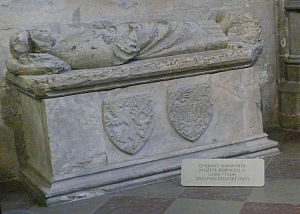 He was originally opposed by Duke Oldřich of Brno, his cousin, who had recovered the stronghold originally confiscated from his father. A civil war ensued. Oldřich intended to recognise the suzerainty of Henry IV, Holy Roman Emperor, and thereby gain his support, but Bořivoj had already been confirmed by the emperor. Oldřich was eventually forced to flee to Moravia.

In 1102, Ladislaus I Herman, duke of Poland, died. A quarrel broke out in Poland over the succession, with Bořivoj and his cousin Svatopluk supporting Zbigniew against the legitimate heir Boleslaus III of Poland. Boleslaus, however, paid Bořivoj off and the latter withdrew from the conflict. Svatopluk, furious, defected and led a number of Bohemian grandees with him. He sought to induce Coloman of Hungary to go to war with Bořivoj, but was unsuccessful until 1107. In that year, Bořivoj's younger brother, Vladislaus, rebelled and, with Coloman's help, took Prague. Svatopluk, who had recently captured and been forced to release Bořivoj by the Emperor Henry V, was proclaimed king.

Bořivoj attacked in 1108 with the aid of Boleslaus in alliance with Coloman, whom Svatopluk and Henry were jointly attacking in Hungary. Svatopluk was recalled to fight him off and soon the emperor was invading Poland. Svatopluk was murdered on this campaign by supporters of Bořivoj, but he could not regain the throne, which went to Vladislaus. In 1117, the brothers were reconciled and they ruled the duchy jointly (though divided) until 1120, when a new disagreement led Bořivoj to self-exile in Hungary, where he died on 2 February 1124.