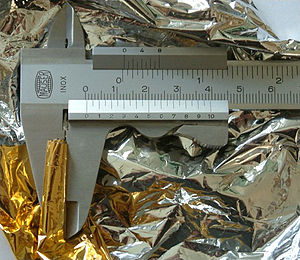 A variety of companies manufacture boPET and other polyester films under different brand names. In the UK and US, the most well-known trade names are Mylar, Melinex and Hostaphan.[1]

BoPET film was developed in the mid-1950s, originally by DuPont, Imperial Chemical Industries (ICI) and Hoechst. In 1964, NASA launched Echo II (the second mission of Project Echo). It was a 40 m (131 ft) diameter balloon constructed from "a 0.35mil (9µm) thick mylar film sandwiched between two layers of 0.18 mil (4.5µm) thick aluminum foil and bonded together."[2]

The manufacturing process begins with a film of molten polyethylene terephthalate (PET) being extruded onto a chill roll, which quenches it into the amorphous state.[3] It is then biaxially oriented by drawing. The most common way of doing this is the sequential process, in which the film is first drawn in the machine direction using heated rollers and subsequently drawn in the transverse direction, i.e. orthogonally to the direction of travel, in a heated oven. It is also possible to draw the film in both directions simultaneously, although the equipment required for this is somewhat more elaborate. Draw ratios are typically around 3 to 4 in each direction.

Once the drawing is completed, the film is "heat set" or crystallized under tension in the oven at temperatures typically above 200 °C (392 °F). The heat setting step prevents the film from shrinking back to its original unstretched shape and locks in the molecular orientation in the film plane. The orientation of the polymer chains is responsible for the high strength and stiffness of biaxially oriented PET film, which has a typical Young's modulus of about 4 GPa. Another important consequence of the molecular orientation is that it induces the formation of many crystal nuclei. The crystallites that grow rapidly reach the boundary of the neighboring crystallite and remain smaller than the wavelength of visible light. As a result, biaxially oriented PET film has excellent clarity, despite its semicrystalline structure.

If it were produced without any additives, the surface of the film would be so smooth that layers would adhere strongly to one another when the film is wound up, similar to the sticking of clean glass plates when stacked. To make handling possible, microscopic inert inorganic particles are usually embedded in the PET to roughen the surface of the film.

Biaxially oriented PET film can be metallized by vapor deposition of a thin film of evaporated aluminium, gold, or other metal onto it. The result is much less permeable to gases (important in food packaging) and reflects up to 99% of light, including much of the infrared spectrum. For some applications like food packaging, the aluminized boPET film can be laminated with a layer of polyethylene, which provides sealability and improves puncture resistance. The polyethylene side of such a laminate appears dull and the PET side shiny.

Other coatings, such as conductive indium tin oxide (ITO), can be applied to boPET film by sputter deposition.

Uses for boPET polyester films include, but are not limited to: