Bobby is a 2006 American drama film written and directed by Emilio Estevez, and starring an ensemble cast. The screenplay is a fictionalized account of the hours leading up to the June 5, 1968 shooting of U.S. Senator Robert F. Kennedy in the kitchen of The Ambassador Hotel in Los Angeles following his win of the 1968 Democratic Party presidential primary in California.

The film recreates the ambiance of the era and invokes the hopes inspired by Kennedy through the use of actual broadcast and newsfilm footage of the senator intercut with dramatic sequences involving mostly fictional characters. It uses an ensemble plot device similar to that employed in the 1932 film Grand Hotel, and by Robert Altman in Nashville.

The characters include John Casey, a retired hotel doorman who spends his days playing chess with his friend Nelson in the lobby; Diane, who is marrying her friend William with the hope his marital status will have him deployed to a military base in Germany rather than the battlefields of Vietnam when his tour of duty begins; Virginia Fallon, an alcoholic singer whose career is on the downswing, her put-upon husband/manager Tim, and her agent Phil; Miriam Ebbers, a beautician who works in the hotel salon, and her husband Paul, the hotel manager, who is having an affair with switchboard operator Angela; food and beverage manager Daryl Timmons, whose racist attitude gets him fired; African American sous chef Edward Robinson and Mexican American busboys José and Miguel; hotel coffee shop waitress Susan; Jimmy and Cooper, campaign volunteers who are sidetracked by an acid trip they take with the help of drug dealer Fisher; married socialites and campaign donors Samantha and Jack; campaign manager Wade and staffer Dwayne, who is in a love interest with Angela's colleague, Patricia; and Czechoslovak reporter Lenka Janáčková, who is determined to get an interview with Kennedy.

In Bobby: The Making of an American Epic, screenwriter/director Emilio Estevez discusses the problems he had developing his script. Suffering from writer's block, he checked into a motel in Pismo Beach where he hoped, free from interruption, he could make some headway with his writing. While talking to the woman working at the front desk, he discovered she had been in the Ambassador Hotel on the evening Kennedy was shot, and later married two young men to help them avoid the draft. Estevez used her experience to mold the character of Diane, and the rest of the story fell into place.

The only other character based on a real person is busboy José, who represents Juan Romero, the young man who was photographed cradling Kennedy's body immediately after he was shot. The character of José has tickets to the Los Angeles Dodgers game in which Don Drysdale is expected to set the record of six consecutive shutouts, but is obliged to work a double shift, forcing him to miss the game. Drysdale did in fact achieve his sixth shutout on June 4, 1968, and was congratulated by Kennedy during the victory speech he delivered just before being shot.[4]

The Ambassador Hotel had shuttered its doors and put its fixtures and furnishings up for auction during the film's pre-production period, giving production designer Patti Podesta the opportunity to purchase much of the furniture and decorative pieces used in the film. The hotel was scheduled for demolition one week after filming was scheduled to begin. Estevez got permission to film in and around the building during that period, adding to the film's authenticity.[5]

The film score was composed by Mark Isham, with "Never Gonna Break My Faith" written by Bryan Adams and performed by Aretha Franklin, Mary J. Blige, and the Boys Choir of Harlem, which was played during the closing credits. Also, a newly recorded version of "Louie Louie" was performed in character by Demi Moore for the film.

Songs heard throughout the film consist of a music compilation from the 1960s, including "Tracks of My Tears" by Smokey Robinson, "I Was Made to Love Her" by Stevie Wonder, "Ain't That Peculiar" by Marvin Gaye, an original acoustic version of "The Sound of Silence" by Simon & Garfunkel, "Anji" covered by Jason Huxley, "Come See About Me" by The Supremes, "There's a Kind of Hush" by Herman's Hermits, "Black Is Black" by Los Bravos, "Season of the Witch" and "Hurdy Gurdy Man" by Donovan, "Wives and Lovers" by Jack Jones, "Magic Moments" by Perry Como, "Pata Pata" by Miriam Makeba, and "Initials" from the musical Hair. 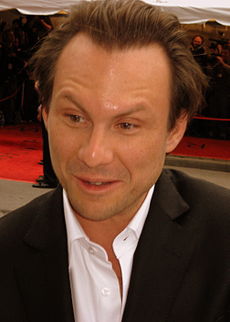 Christian Slater - who played Daryl Timmons in the film - at TIFF for Bobby's North American debut.

Bobby received mainly mixed reviews from critics, who praised its ensemble cast and the direction of Emilio Estevez but criticized the film for having too many plot points and characters. It has a rating of 46% on Rotten Tomatoes, based on 169 reviews, with an average score of 5.6 out of 10. The consensus states, "Despite best intentions from director Emilio Estevez and his ensemble cast, they succumb to a script filled with pointless subplots and awkward moments working too hard to parallel contemporary times."[8] The film also has a score of 54 out of 100 on Metacritic, based on 31 critics, indicating mixed or average reviews.[9]

A. O. Scott of The New York Times said, "Emilio Estevez . . . sets himself a large and honorable task. It is important to appreciate this in spite of his movie's evident shortcomings. Intentions do count for something, and Mr. Estevez's seem to me entirely admirable . . . The actors seem more like 'very special guest stars' than like real, 1968-vintage Americans, and their period-appropriate get-ups . . . are more distracting than convincing . . . Some of the stories feel too obviously melodramatic, while others are vague to the point of inscrutability. In the Vietnam- and drug-related plots, the point is hammered home too hard . . . while other narratives wind toward no discernible point at all. Nonetheless the ambition behind Bobby is large and serious."[10]

Kevin Crust of the Los Angeles Times called it "an ambitious film drenched in sincerity and oozing with nostalgia that, despite the energy provided by its title icon via archival footage, falls flat dramatically in nearly every other way. It aspires for the Altmanesque interplay of Nashville or Short Cuts but instead feels like one of those '70s disaster epics such as Earthquake or The Towering Inferno, in which a star-studded cast endures melodramatic story lines as the audience awaits the inevitable momentous event and tries to guess who will be around at the finish . . . It's easy to become swept up in the palpable enthusiasm Estevez shows toward his subject, but the pedestrian and overly expositional dialogue of the film's characters proves to be as stifling as the excerpts from Kennedy's speeches are stirring."[11]

Deborah Young of Variety said of Estevez, "Stepping up as writer and director in a way he never has before, [he] successfully pulls together a complexly designed narrative," and added the film "carries an eerie topicality that makes many of its insights instantly click."[12] Armond White of New York Press wrote that the film "has a humane sweetness", and that it "literally and vividly unites different ethnic groups, labor strata and social castes" in a way that "is not schematic—its exactitude and believability has a Tocquevillian brilliance."[13]

Steve Persall of the St. Petersburg Times graded the film C, calling it "a misguided jumble of too much fiction, few facts and zero speculation" and Estevez "a mediocre filmmaker."[14] Michael Medved, who was in the Ambassador ballroom (20 feet from the podium) the night Kennedy was shot, awarded the film three out of four stars and called it "intriguing but imperfect." He added, "Emilio Estevez gets most of the feelings of the occasion right. But, the melodramatic, multi-character format proves somewhat uneven and distracting."[15]

Richard Roeper said, "Estevez writes and directs with lots of passion, not so much subtlety . . . [He] wants the movie to be on the level of a Robert Altman film like Nashville but falls short."[16] Peter Travers of Rolling Stone gave the film one star and called it "trite fiction" and a work of "insipid ineptitude." He ranked it among the worst films of 2006, as did Lou Lumerick of the New York Post, who dubbed it an "ambitious, but utterly wrong-headed trivialization."[17]