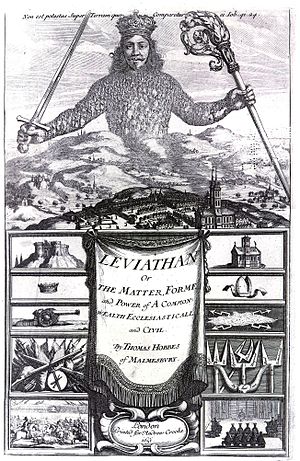 The cover of Hobbes' Leviathan famously portrays the metaphor by showing a body formed of a multitude of citizens which is surmounted by a King's head.[1]

A body politic is a metaphor in which a nation is considered to be a corporate entity,[2] being likened to a human body. The word "politic" in this phrase is a postpositive adjective; so it is "a body of a politic nature" rather than "a politic of a bodily nature". A body politic comprises all the people in a particular country considered as a single group. The analogy is typically continued by reference to the top of government as the head of state,[3] but may be extended to other anatomical parts, as in political readings of the Aesop's fable, "The Belly and the Members".The first mentioning of the term in print in Europe appears through the works The Book Of The Body Politic of Poet and Court writer Christine de Pizan in 1407 in which she readily admits to borrowing the concept from John of Salisbury taken from his work Policratus[4] The metaphor appears in the French language as the corps-état.[5] The metaphor developed in Renaissance times, as the medical knowledge based upon the classical work of Galen was being challenged by new thinkers such as William Harvey. Analogies were made between the supposed causes of disease and disorder and their equivalents in the political field which were considered to be plagues or infections which might be remedied by purges and nostrums.[6]

"Body politic" derives from the mediæval political concept of the King's two bodies first noted by mediaeval historian Ernst Kantorowicz,[7] as a point of theology as much as statehood. The person to give the concept some legal bite and codified reality, as much as legitimacy as well as Sovereignty, was the 14th century Judge Sir William de Shareshull in 1351 for the offence of High treason in the aftermath of the Barons war. However, by the time of the fifteenth-century judge Sir John Fortescue the concept moves away from theology to jurisprudence in his The Difference between an Absolute and a Limited Monarchy, written from exile in about 1462 . Fortescue explains that the character angelus (divine character) of the king is his royal power, derived from angels and separate from the frail physical powers of his body. However, he uses the phrase body politic itself only in its modern sense, to describe the realm, or shared rule, of Brutus, mythical first king of England, and how he and his fellow exiles had covenanted to form a body politic. Unusually for the time, Fortescue was writing in English and not Latin: "made a body pollitike callid a reawme."[2]

In 1550 the jurist Edmund Plowden merged Fortescue's concepts, at the same time removing them from abstraction into a real, physical manifestation in the body of the king. Plowden reports how lawyers codified this notion in an examination of a case of land-ownership turning on a disputed gift by an earlier monarch; they determined that the "Body politic…that cannot be seen or handled…[is] constituted for the direction of the People…[and] these two bodies are incorporated in one person…the Body politic includes the [king's] Body natural."[8] In 1609 Attorney General Edward Coke pronounced his dissenting opinion, that mortal power was God-made while the immortality of royal power existed only as a man-made concept; Coke later succeeded in limiting the royal power of both Charles I and James VI and I with his now infamous judgements of Case of Proclamations and also with his Petition of Right, which would have reverberations right across the country for the next 100 years. When the monarchy, in the person of Charles II, was restored at the end of the Commonwealth the idea remained current and royalty continued to use the notion, as a buttress to its authority, until an assertion of the rights of Parliament brought about the Glorious Revolution of 1688.[9][10] In the 18th century jurists and highly influential judge Sir William Blackstone still maintains the medieval idea and most certainly the legal argument of the monarch as ‘immortal’ and a quasi divine (character angelus) being.[11]

The pre-Revolution monarchs of France also claimed legitimacy on this principle, and extended it to include the idea that the king's heir assimilated the "body politic" of the old king, in a physical "transfer of corporeality", on accession.[12]