From Infogalactic: the planetary knowledge core
Jump to: navigation, search
This article is about the wetland. For other uses, see Bog (disambiguation). 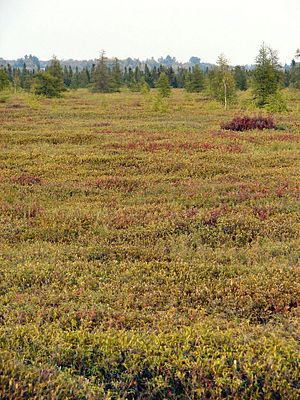 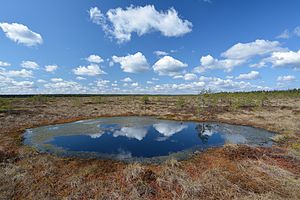 A bog is a mire that accumulates peat, a deposit of dead plant material—often mosses, and in a majority of cases, sphagnum moss.[1] It is one of the four main types of wetlands. Other names for bogs include mire, quagmire, and muskeg; alkaline mires are called fens. They are frequently covered in ericaceous shrubs rooted in the sphagnum moss and peat. The gradual accumulation of decayed plant material in a bog functions as a carbon sink.[2]

Bogs occur where the water at the ground surface is acidic and low in nutrients. In some cases, the water is derived entirely from precipitation, in which case they are termed ombrotrophic (rain-fed). Water flowing out of bogs has a characteristic brown colour, which comes from dissolved peat tannins. In general, the low fertility and cool climate results in relatively slow plant growth, but decay is even slower owing to the saturated soil. Hence peat accumulates. Large areas of landscape can be covered many metres deep in peat.[1][3]

Bogs have distinctive assemblages of plant and animal species, and are of high importance for biodiversity, particularly in landscapes that are otherwise settled and farmed. 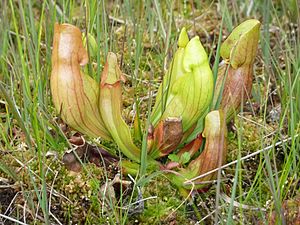 Carnivorous plants, such as this Sarracenia purpurea pitcher plant of the eastern seaboard of North America, are often found in bogs. Capturing insects provides nitrogen and phosphorus, which are usually scarce in such conditions.

Bogs are widely distributed in cold, temperate climes, mostly in boreal ecosystems in the Northern Hemisphere. The world's largest wetland is the peat bogs of the Western Siberian Lowlands in Russia, which cover more than a million square kilometres.[4] Large peat bogs also occur in North America, particularly the Hudson Bay Lowland and the Mackenzie River Basin.[4] They are less common in the Southern Hemisphere, with the largest being the Magellanic moorland, comprising some 44,000 square kilometers. Sphagnum bogs were widespread in northern Europe[5] but have often been cleared and drained for agriculture.

A 2014 expedition leaving from Itanga village, Republic of the Congo discovered a peat bog "as big as England" which stretches into neighboring Democratic Republic of Congo.[6] 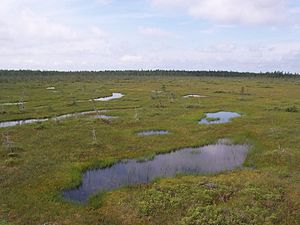 An expanse of wet Sphagnum bog. Spruce trees can be seen on a forested ridge in the background.

There are many highly specialised animals and plants associated with bog habitat. Most are capable of tolerating the combination of low nutrient levels and waterlogging.[7] Sphagnum moss is generally abundant, along with ericaceous shrubs. The shrubs are often evergreen, which is understood to assist in conservation of nutrients.[8] In drier locations, evergreen trees can occur, in which case the bog blends into the surrounding expanses of boreal evergreen forest.[9] Sedges are one of the more common herbaceous species. Carnivorous plants such as sundews (Drosera) and pitcher plants (for example Sarracenia purpurea) have adapted to the low-nutrient conditions by using invertebrates as a nutrient source. Orchids have adapted to these conditions through the use of mycorrhizal fungi to extract nutrients.[10] Some shrubs such as Myrica gale (bog myrtle) have root nodules in which nitrogen fixation occurs, thereby providing another supplemental source of nitrogen.[11] 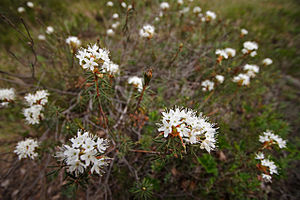 Many species of evergreen shrubs are found in bogs, such as Labrador tea.

Bogs are recognised as a significant/specific habitat type by a number of governmental and conservation agencies. They can provide habitat for mammals, such as caribou, moose, and beavers, as well as for species of nesting shorebirds, such as Siberian cranes and yellowlegs. The United Kingdom in its Biodiversity Action Plan establishes bog habitats as a priority for conservation. Russia has a large reserve system in the West Siberian Lowland.[12] The highest protected status occurs in Zapovedniks (IUCN category IV); Gydansky[13] and Yugansky are two prominent examples. Bogs even have distinctive insects; English bogs give a home to a yellow fly called the hairy canary fly (Phaonia jaroschewskii), and bogs in North America are habitat for a butterfly called the bog copper (Lycaena epixanthe).

Bog habitats may develop in various situations, depending on the climate and topography[14] (see also hydrosere succession).

By location and water source

One way of classifying them is based upon their location in the landscape, and their source of water.[15]

These develop in gently sloping valleys or hollows. A layer of peat fills the deepest part of the valley, and a stream may run through the surface of the bog. Valley bogs may develop in relatively dry and warm climates, but because they rely on ground or surface water, they only occur on acidic substrates. 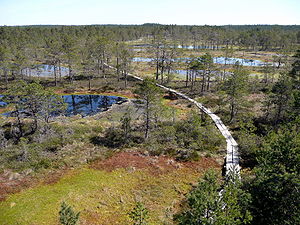 Viru Bog in Lahemaa National Park, Estonia, which is rich in raised bogs.

These develop from a lake or flat marshy area, over either non-acidic or acidic substrates. Over centuries there is a progression from open lake, to marsh, then fen (or on acidic substrates, valley bog) and carr, as silt or peat fills the lake. Eventually peat builds up to a level where the land surface is too flat for ground or surface water to reach the centre of the wetland. This part therefore becomes wholly rain-fed (ombrotrophic), and the resulting acidic conditions allow the development of bog (even if the substrate is non-acidic). The bog continues to form peat, and over time a shallow dome of bog peat develops: a raised bog. The dome is typically a few metres high in the centre, and is often surrounded by strips of fen or other wetland vegetation at the edges or along streamsides, where ground water can percolate into the wetland. 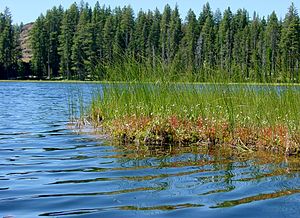 Sphagnum moss and sedges can produce floating bog mats along the shores of small lakes. This one also supports a carnivorous plant, sundew. 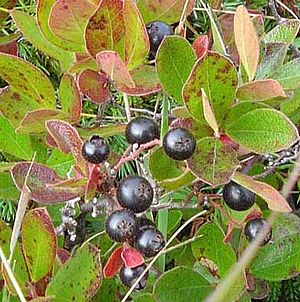 In cool climates with consistently high rainfall, the ground surface may remain waterlogged for much of the time, providing conditions for the development of bog vegetation. In these circumstances bog develops as a layer "blanketing" much of the land, including hilltops and slopes.[16] Although a blanket bog is more common on acidic substrates, under some conditions it may also develop on neutral or even alkaline ones, if abundant acidic rainwater predominates over the ground water. A blanket bog cannot occur in drier or warmer climates, because under those conditions hilltops and sloping ground dry out too often for peat to form – in intermediate climates a blanket bog may be limited to areas which are shaded from direct sunshine. In periglacial climates a patterned form of blanket bog may occur, known as a string bog.

A quaking bog or schwingmoor is a form of bog occurring in wetter parts of valley bogs and raised bogs, and sometimes around the edges of acidic lakes. The bog vegetation, mostly sphagnum moss anchored by sedges (such as Carex lasiocarpa), forms a mat approximately half a metre thick, floating over water or very wet peat. White spruces are also common in this bog regime. Walking on the surface causes it to move – larger movements may cause visible ripples on the surface, or they may even make trees sway. In the absence of disturbance from waves, the bog mat may eventually cover entire bays, or even entire small lakes.

A cataract bog is a rare ecological community formed where a permanent stream flows over a granite outcropping. The sheeting of water keeps the edges of the rock wet without eroding the soil, but in this precarious location no tree or large shrub can maintain a roothold. The result is a narrow, permanently wet habitat.

Bogs may also be classified by the nutrient content of the peat.

A eutrophic bog, also called a minerotrophic bog, is one that lies on top of fen-peat. As a result its water is rich in nutrients. They are found in temperate regions. Fens are eutrophic lowland bogs.[17]

Oligotrophic bogs occur where the groundwater is poor in nutrients e.g. in wetlands with nutrient-poor soils. They occur in several variants: raised bogs, soligenic bogs and blanket bog.[17] 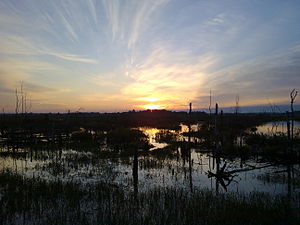 After drying, peat is used as a fuel, and it has been used that way for centuries. More than 20% of home heat in Ireland comes from peat, and it is also used for fuel in Finland, Scotland, Germany, and Russia. Russia is the leading exporter of peat for fuel, at more than 90 million metric tons per year. Ireland's Bord na Móna ("peat board") was one of the first companies to mechanically harvest peat, which is being phased out.[18]

The other major use of dried peat is as a soil amendment (sold as moss peat or sphagnum peat) to increase the soil's capacity to retain moisture and enrich the soil.[2] It is also used as a mulch. Some distilleries, notably in the Islay whisky-producing region, use the smoke from peat fires to dry the barley used in making Scotch whisky.

Once the peat has been extracted, it can be difficult to restore the wetland, since peat accumulation is a slow process.[2][19][20] More than 90% of the bogs in England have been damaged or destroyed.[21][22] In 2011 plans for elimination of peat in gardening products were announced by the government of the U.K.[2]

The peat in bogs is an important place for the storage of carbon. If the peat decayed, carbon dioxide would be released to the atmosphere, contributing to global warming. Undisturbed, bogs function as a carbon sink.[2][23] As one example, the peatlands of the former Soviet Union were calculated to be removing 52 Tg of carbon per year from the atmosphere.[24]

Peat bogs are also important in storing fresh water, particularly in the headwaters of large rivers. Even the enormous Yangtze River arises in the Ruoergai peatland near its headwaters in Tibet.[25]

Blueberries, cranberries, cloudberries, huckleberries, and lingonberries are harvested from the wild in bogs. Bog oak, wood that has been partially preserved by bogs, has been used in the manufacture of furniture.

Sphagnum bogs are also used for outdoor recreation, with activities including hunting and ecotourism. For example, many popular canoe routes in northern Canada include areas of peatland. Some other kinds of activity, such as all-terrain vehicle use, are especially damaging to bogs.

The anaerobic environment and presence of tannic acids within bogs can result in the remarkable preservation of organic material. Finds of such material have been made in Denmark, Germany, Ireland, Russia, and the United Kingdom. Some bogs have preserved bog-wood such as ancient oak logs useful in dendrochronology, and they have yielded extremely well preserved bog bodies, with organs, skin, and hair intact, buried there thousands of years ago after apparent Germanic and Celtic human sacrifice. Excellent examples of such human specimens are Haraldskær Woman and Tollund Man in Denmark,[26] and Lindow man found at Lindow Common in England. At Céide Fields in County Mayo in Ireland, a 5,000-year-old neolithic farming landscape has been found preserved under a blanket bog, complete with field walls and hut sites. One ancient artifact found in bogs in many places is bog butter, large masses of fat, usually in wooden containers. These are thought to have been food stores, of both butter and tallow.