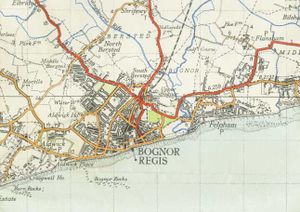 Bognor Regis railway station is in the town of Bognor Regis, in the English county of West Sussex. It is approximately 54 miles southwest of London Victoria. The station and the trains serving it are operated by Southern railway company. The station is a terminus at the end of a short branch off the West Coastway Line.

The original Bognor station was situated on the main line, just over one mile west of the present Barnham railway station. It was opened on 8 June 1846 by the Brighton and Chichester Railway, which became the London Brighton and South Coast Railway a few weeks later. This station was renamed several times during its short life becoming Woodgate for Bognor, Woodgate, Bognor (again) and Woodgate (again) before closing in 1864.[1]

The line was doubled between 1902 and 1911, and electrified in the 1930s. The station was renamed 'Bognor Regis' by the Southern Railway (Great Britain) in 1930 as the town was renamed as such having been the place of the King's (George V) recuperation from serious illness.

Monday to Saturday at off-peak times, there are four services per hour from Bognor Regis. Of these:

On Sundays, there are two services per hour from Bognor Regis. Of these: