The Bonus Army was the popular name for an assemblage of some 43,000 marchers—17,000 U.S. World War I veterans, their families, and affiliated groups—who gathered in Washington, D.C. in the summer of 1932 to demand cash-payment redemption of their service certificates. Organizers called the demonstrators the "Bonus Expeditionary Force", to echo the name of World War I's American Expeditionary Forces, while the media referred to them as the "Bonus Army" or "Bonus Marchers". The contingent was led by Walter W. Waters, a former sergeant.

Many of the war veterans had been out of work since the beginning of the Great Depression. The World War Adjusted Compensation Act of 1924 had awarded them bonuses in the form of certificates they could not redeem until 1945. Each service certificate, issued to a qualified veteran soldier, bore a face value equal to the soldier's promised payment plus compound interest. The principal demand of the Bonus Army was the immediate cash payment of their certificates.

On July 28, U.S. Attorney General William D. Mitchell ordered the veterans removed from all government property. Washington police met with resistance, shots were fired and two veterans were wounded and later died. President Herbert Hoover then ordered the Army to clear the veterans' campsite. Army Chief of Staff General Douglas MacArthur commanded the infantry and cavalry supported by six tanks. The Bonus Army marchers with their wives and children were driven out, and their shelters and belongings burned.

A second, smaller Bonus March in 1933 at the start of the Roosevelt administration was defused in May with an offer of jobs with the Civilian Conservation Corps at Fort Hunt, Virginia, which most of the group accepted. Those who chose not to work for the CCC by the May 22 deadline were given transportation home.[1] In 1936, Congress overrode President Franklin D. Roosevelt's veto and paid the veterans their bonus nine years early.

File:Bonus army on Capitol lawn cph.3a00515.jpg
Members of the Bonus Army camped out on the lawn of the U.S. Capitol building

In 1781, most of the Continental Army was demobilized. Two years later, hundreds of Pennsylvania war veterans marched on Philadelphia, then the nation's capital, surrounded the State House, where the U.S. Congress was in session and demanded back pay. Congress fled to Princeton, New Jersey, and several weeks later, the U.S. Army expelled the war veterans from Philadelphia.

The practice of war-time military bonuses began in 1776, as payment for the difference between what a soldier earned and what he could have earned had he not enlisted.[2] Breaking with tradition, the veterans of the Spanish–American War did not receive a bonus and after World War I, that became a political matter when they received only a $60 bonus. The American Legion, created in 1919, led a political movement for an additional bonus.[3]

On May 15, 1924, President Calvin Coolidge vetoed a bill granting bonuses to veterans of World War I, saying: "patriotism... bought and paid for is not patriotism." Congress overrode his veto a few days later,[3] enacting the World War Adjusted Compensation Act. Each veteran was to receive a dollar for each day of domestic service, up to a maximum of $500, and $1.25 for each day of overseas service, up to a maximum of $625 (2017: $8,903.62).[4] Amounts of $50 or less were immediately paid. All other amounts were issued as Certificates of Service maturing in 20 years.[5]

There were 3,662,374 Adjusted Service Certificates issued, with a combined face value of $3,638,000,000 (2017: $51,826,182,105.26).[4] Congress established a trust fund to receive 20 annual payments of $112 million that, with interest, would finance the 1945 disbursement of the $3.638 billion for the veterans. Meanwhile, veterans could borrow up to 22.5% of the certificate's face value from the fund; but in 1931, because of the Great Depression, Congress increased the maximum value of such loans to 50% of the certificate's face value.[6] Although there was congressional support for the immediate redemption of the military service certificates, Hoover and Republican congressmen opposed such action and reasoned that the government would have to increase taxes to cover the costs of the payout and so any potential economic recovery would be slowed.[7]

The Veterans of Foreign Wars continued to press the federal government to allow the early redemption of military service certificates.[8]

The first march of the unemployed was Coxey's Army in 1894, when armies of men from various regions streamed to Washington as a "living petition" to demand that the federal government create jobs by investing in public infrastructure projects[9] In January 1932, a march of 25,000 unemployed Pennsylvanians, dubbed "Cox's Army", had marched on Washington, D.C., the largest demonstration to date in the nation's capital, setting a precedent for future marches by the unemployed.[citation needed]

Most of the Bonus Army camped in a "Hooverville" on the Anacostia Flats, a swampy, muddy area across the Anacostia River from the federal core of Washington, just south of the 11th Street Bridges (now Section C of Anacostia Park). The camps, built from materials scavenged from a nearby rubbish dump, were tightly controlled by the veterans, who laid out streets, built sanitation facilities, and held daily parades. To live in the camps, veterans were required to register and to prove they had been honorably discharged.[citation needed] The Superintendent of the D.C. Police, Pelham D. Glassford, worked with camp leaders to maintain order.

On June 15, 1932, the US House of Representatives passed the Wright Patman Bonus Bill to move forward the date for World War I veterans to receive their cash bonus.[10] The Bonus Army massed at the U.S. Capitol on June 17 as the U.S. Senate voted on the Bonus Bill. The bill was defeated by a vote of 62–18.[citation needed]

The marchers remained at their campsite waiting for Hoover to act. On July 28, 1932, Attorney General William D. Mitchell ordered the police to remove the Bonus Army veterans from their camp. When the veterans moved back into it, police drew their revolvers and shot at the veterans, two of whom, William Hushka and Eric Carlson, died later.[11][12]

Hushka (1895– July 28, 1932) was an immigrant to the United States from Lithuania. When the US entered World War I in 1917, he sold his butcher shop in St. Louis, Missouri and joined the United States Army. After the war, he lived in Chicago.[12] Hushka is buried in Arlington National Cemetery.[citation needed]

When told of the shootings, Hoover ordered the army to evict the Bonus Army from Washington.[citation needed]

At 4:45 p.m., commanded by General Douglas MacArthur, the 12th Infantry Regiment, Fort Howard, Maryland, and the 3rd Cavalry Regiment, supported by six M1917 light tanks commanded by Maj. George S. Patton, formed in Pennsylvania Avenue while thousands of civil service employees left work to line the street and watch. The Bonus Marchers, believing the troops were marching in their honor, cheered the troops until Patton ordered[citation needed] the cavalry to charge them, which prompted the spectators to yell, "Shame! Shame!"[citation needed] 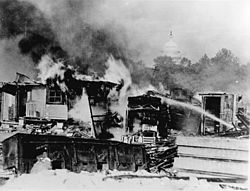 Shacks that members of the Bonus Army erected on the Anacostia Flats burning after its confrontation with the army.

After the cavalry charged, the infantry, with fixed bayonets and tear gas (adamsite, an arsenical vomiting agent) entered the camps, evicting veterans, families, and camp followers. The veterans fled across the Anacostia River to their largest camp, and Hoover ordered the assault stopped. MacArthur chose to ignore the president and ordered a new attack, claiming that the Bonus March was an attempt to overthrow the US government; 55 veterans were injured and 135 arrested.[12] A veteran's wife miscarried. When 12-week-old Bernard Myers died in the hospital after being caught in the tear gas attack, a government investigation reported he died of enteritis, and a hospital spokesman said the tear gas "didn't do it any good."[16]

During the military operation, Major Dwight D. Eisenhower, later the 34th president of the United States, served as one of MacArthur's junior aides.[17] Believing it wrong for the Army's highest-ranking officer to lead an action against fellow American war veterans, he strongly advised MacArthur against taking any public role: "I told that dumb son-of-a-bitch not to go down there," he said later. "I told him it was no place for the Chief of Staff."[18] Despite his misgivings, Eisenhower later wrote the Army's official incident report that endorsed MacArthur's conduct.[19]

Joe Angelo, a decorated hero from the war who had saved Patton's life during the Meuse-Argonne offensive on September 26, 1918, approached him the day after to sway him. Patton, however, dismissed him quickly. This episode was said to represent the proverbial essence of the Bonus Army, each man the face of each side; Angelo the dejected loyal soldier, Patton the unmoved government instrument unconcerned with past duties.[20]

Though the Bonus Army incident did not derail the careers of the military officers involved, it proved politically disastrous for Hoover, and is considered to be a contributing factor leading to him losing the 1932 election in a landslide to Franklin D. Roosevelt.[citation needed]

Police Superintendent Glassford was not pleased with the decision to have the Army intervene, believing that the police could have handled the situation. He soon resigned as superintendent.

MGM released the movie Gabriel Over the White House in March 1933, the month Roosevelt was sworn in as president. Produced by William Randolph Hearst's Cosmopolitan Pictures, it depicted a fictitious President Hammond who, in the film's opening scenes, refuses to deploy the military against a march of the unemployed and instead creates an "Army of Construction" to work on public works projects until the economy recovers.[21] First Lady Eleanor Roosevelt judged the movie's treatment of veterans superior to Hoover's.[22]

During the presidential campaign of 1932, Roosevelt had opposed the veterans' bonus demands.[23] When they organized a second demonstration in May 1933, he provided the marchers with a campsite in Virginia and provided them three meals a day.[citation needed]

Administration officials, led by presidential confidant Louis Howe, tried to negotiate an end to the protest. Roosevelt arranged for his wife, Eleanor, to visit the site unaccompanied. She lunched with the veterans and listened to them perform songs. She reminisced about her memories of seeing troops off to World War I and welcoming them home. The most that she could offer was a promise of positions in the newly created Civilian Conservation Corps (CCC).[22] One veteran commented, "Hoover sent the army, Roosevelt sent his wife."[24] In a press conference following her visit, the First Lady described her reception as courteous and praised the marchers, highlighting how comfortable she felt despite critics of the marchers who described them as communists and criminals.[22]

Roosevelt later issued an executive order allowing the enrollment of 25,000 veterans in the CCC, exempting them from the normal requirement that applicants be unmarried and under the age of 25.[25] Congress, with Democrats holding majorities in both houses, passed the Adjusted Compensation Payment Act in 1936, authorizing the immediate payment of the $2 billion in World War I bonuses, and then overrode Roosevelt's veto of the measure.[26] The House vote was 324 to 61,[27] and the Senate vote was 76 to 19.[28]