Bořivoj I, Duke of Bohemia

From Infogalactic: the planetary knowledge core
(Redirected from Borivoj I, Duke of Bohemia)
Jump to: navigation, search

Bořivoj I (Czech pronunciation: [ˈbɔr̝ɪvɔj], Latin: Borzivogius, c. 852 – c. 889) was the first historically documented Duke of Bohemia from about 870 and progenitor of the Přemyslid dynasty.[1] The Duchy of Bohemia was at these times subordinated to Great Moravia.

According to the medieval chronicler Cosmas of Prague (c. 1045 – 1125), Bořivoj was a son of the legendary Bohemian prince Hostivít, thereby a descendant of Queen Libuše and her husband Přemysl the Ploughman. With all due caution however, his ancestry has not been conclusively established by historians. In view of his dependence on Great Moravia, he possibly was a relative of the Mojmir dynasty. The contemporary Frankish Annales Fuldenses mention several Slavic princes in the year 872, among them one Goriwei who may be identical with Bořivoj.

His dynasty initially resided at Levý Hradec, a gord situated northwest of present-day Prague. As the head of the Přemyslids who dominated the Central Bohemian environs, Bořivoj declared himself kníže - in Latin dux, which means sovereign prince - around the year 867 AD. His title was later translated by German scholars as "duke" (Herzog) of the Bohemians (Czechs). Although the rulers of the German stem duchies emerging in the late 9th century held the same title, the meaning of his title was in fact completely different. In contrast to the German dukes acting as the king's representatives, the Czech dux denoted a sovereign ruler.[citation needed] Bořivoj was recognised as such around 872 by his overlord King Svatopluk I of Moravia, who dispatched Bishop Methodius of Thessalonica to begin the Christianization of Bohemia. 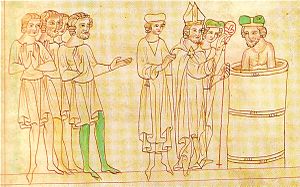 In 872 Bořivoj militarily supported Svatopluk in its dispute with East Frankish king, Louis the German, and in south Bohemia they defeated the Frankish troops. About 874 Bořivoj married Ludmila (later canonized); the couple had two known sons, Spytihněv and Vratislaus, who both succeeded him as dukes. Ludmila and Bořivoj were baptised by Methodius (probably in 883), and the latter became an enthusiastic evangelist, although the religion failed to take root among Bořivoj's subjects.

In the years 883/884 Bořivoj was deposed by a revolt in support of his Přemyslid kinsman Strojmír. He was restored in 885 only with the support of his suzerain Svatopluk of Moravia. The duke or more probably his son Spytihněv moved his residence to the Hradčany mountain and laid the foundations for Prague Castle. When Bořivoj died about 889, his sons still minors, King Svatopluk concluded an agreement with the East Frankish ruler Arnulf of Carinthia and took over the rule of the Bohemian duchy himself.

As with most of the early Bohemian rulers, Bořivoj is a shadowy figure; exact dates for his reign and vital statistics cannot be established. Nonetheless, several major fortifications and religious foundations are said to have dated from this time.