Born in the purple 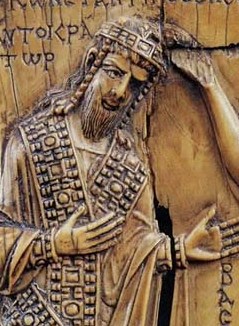 Constantine VII Porphyrogenitus, who was purple-born, in a 945 carved ivory.

Traditionally, born in the purple[1] was a category of members of royal families born during the reign of their parent. This was later loosely expanded to include all children born of prominent or high-ranking parents.[2] The parents must be prominent at the time of the child's birth so that the child is always in the spotlight and destined for a prominent role in life. A child born before the parents become prominent would not be "born in the purple." The color purple refers to Tyrian purple, restricted by law, custom and the expense of creating it to royalty.

The concept derives from the Roman/Byzantine Imperial concept of Porphyrogenitus under which children born to reigning emperors held superior rights to the throne over siblings born before their father ascended the imperial throne.[3] The term is sometimes associated with the rareness and great expense of purple dye in the ancient world.[4] In the Byzantine Empire being Porphyrogenitus very specifically meant being born in the Porphyra or purple chamber of the Imperial Palace, a room which Anna Comnena said was "set apart long ago for an Empress's confinement" and which was decorated with expensive porphyry marble.[5]

To be "born in the purple" is often seen as a limitation to be escaped rather than a benefit or a blessing.[6] Rarely, the term refers to someone born with immense talent that shapes their career and forces them into paths they might not otherwise wish to follow. An obituary of the British composer Charles Hubert Hastings Parry complains that his immense natural talent (described as being "born in the purple") forced him to take on teaching and administrative duties that prevented him from composing in the manner that might have been allowed to someone who had to develop their talent.[7]

In this sense, the parent's prominence predetermines the child's role in life. A royal child, for instance, is denied the opportunity to an ordinary life because of his parent's royal rank.[8] An example of this usage can be seen in the following discussion comparing the German Kaiser William II with his grandfather, William I, and his father, Frederick III:

The classic definition restricted use of the category specifically to the legitimate offspring born to reigning monarchs after they ascended to the throne.[9] It did not include children born prior to their parent's accession or, in an extremely strict definition, their coronation.[10]