Relations between Boston, Massachusetts and Halifax, Nova Scotia date back to the founding of Halifax in 1749, when Boston businesses had an interest in the new settlement for shipping and fish trade. The bond between the two cities became strongest following the Halifax Explosion in 1917, after Boston sent significant aid and disaster relief to Halifax.

On December 6, 1917 at 9:04.35 AM, the Halifax Explosion severely destroyed much of the city. Boston authorities learned of the disaster via telegraph, and quickly organized and dispatched a relief train around 10:00 PM that night, to assist survivors. A blizzard following the explosion delayed the train, which finally arrived in the early morning on December 8, and immediately began distributing food, water, and medical supplies. Numerous personnel on the train were able to relieve the Nova Scotia medical staff, most of whom had worked without rest since the explosion occurred. 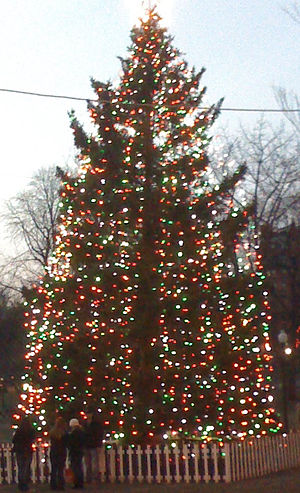 In 1918, Halifax sent a Christmas tree to the City of Boston in thanks and remembrance for the help that the Boston Red Cross and the Massachusetts Public Safety Committee had provided immediately after the disaster.[1][2] That gift was revived in 1971 by the Lunenburg County Christmas Tree Producers Association, who began an annual donation of a large tree to promote Christmas tree exports as well as to acknowledge Boston's support after the explosion. The gift was later taken over by the Nova Scotia Government to continue the goodwill gesture as well as to promote trade and tourism.[3]

The tree is Boston's official Christmas tree and is lit on Boston Common throughout the holiday season. Knowing its symbolic importance to both cities, the Nova Scotia Department of Natural Resources has specific guidelines for selecting the tree. It must be an attractive balsam fir, white spruce or red spruce, 12 to 16 metres (40 to 50 ft) tall, healthy with good colour, medium to heavy density, uniform and symmetrical and easy to access.[4]

For the Christmas tree extension specialist in charge of locating it, the "tree can be elusive, the demands excessive, and the job requires remembering the locations of the best specimens in the province and persuading the people who own them to give them up for a pittance." Most donors are "honoured to give up their trees... [and] most will gladly watch their towering trees fall" since everyone knows the reason it is being sent to Boston. The trees don't often come from tree farms, but instead from open land where they can grow tall and full. It is so important to the people of Nova Scotia that "people have cried over it, argued about it, even penned song lyrics in its honor."[5]

Travel between Halifax and Boston is common, particularly in the summer months. Some visitors choose to drive the entire distance, an estimated 10–12 hours driving nonstop, but the journey is much more pleasant if taken at a leisurely pace instead. Formerly, a fast ferry service ran between Bar Harbour, Maine and Yarmouth, Nova Scotia and was the most popular break from continuous driving, it carried both cars and passengers across the Gulf of Maine[6] but it was discontinued, to be replaced with a "cruise style ferry" in 2014.

There is currently a weekly container feeder service between the port of Halifax and the port of Boston. This gives Boston access to 20 shipping lines which come in to Halifax.[8][9] There is also a thrice weekly train run by Pan Am Railways and the New Brunswick Southern Railway dubbed The Bluenose.[10] Freight is run by Canadian National Railway from the port of Halifax to Saint John, New Brunswick, where it is then transferred to the New Brunswick Southern to be sent to Pan Am in Waterville, Maine. From there, freight is sent to an intermodal facility in Worcester, Massachusetts for distribution in Greater Boston or further transfer to CSX Transportation.[10][11]

The Hibernia Atlantic, a submarine communications cable, runs from Boston to Halifax via landing points in Lynn, Massachusetts and Herring Cove, Nova Scotia with a capacity of 10.6 Terabytes/second. The cable also continues across the Atlantic Ocean to connect the United States, Canada, Ireland, the United Kingdom, and Europe.[12]

A notable proportion of Nova Scotians (and Haligonians in particular) identify as supporters of Boston's major professional sports league teams.[13][14] Following the Boston Red Sox victory in the 2007 World Series, the trophy was brought to Halifax for 2 days.[15] The Stanley Cup and the Larry O'Brien and Vince Lombardi Trophies have also been brought to Halifax by, respectively, Bruins, Celtics and Patriots players. In 1983, the Patriots sold their old scoreboard at a discounted price to the owners of the region's Canadian Football League expansion franchise, although the team folded before ever taking the field after funding for a stadium fell through. Before The Patriots were close to Halifax, New York Giants were the closest NFL team In the Maritimes and also seen on CBHT and CJCH-DT before Cable Television also came out.