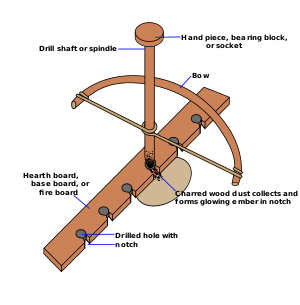 Diagram of a bow drill designed for fire starting

The bow drill is an ancient form of drilling tool. It commonly was used to make friction fire, and in this function it also was called a fire drill.[1] However, the same principle also was used widely in drilling for purposes of woodworking[2] and dentistry.[3]

Bow drills were used in Mehrgarh between the 4th and 5th millennium BC.[4] This bow drill—used to drill holes into lapis lazuli and carnelian—was made of green jasper.[4] Similar drills were found in other parts of the Indus Valley Civilization and Iran one millennium later.[4]

The bow drill consists of a bearing block or handhold, a spindle or drill, a hearth or fireboard, and a simple bow. Other early versions of mechanical drills include the pump drill and the hand drill.[1]

The drill offers an ancient method of starting fire without matches or a lighter, a method that applies friction to generate heat. The heat eventually produces an ember in the burnt sawdust. The ember is tiny, smaller than the head of a cigarette, and fragile. Once the ember is formed it is carefully placed into a "tinder bundle" (a bird's type nest of stringy, fluffy, and combustible material). Once the ember is in the tinder bundle it is then carefully nurtured and coaxed into flame. Once the tinder bundle bursts into flame, it is placed into the fuel that has been assembled ready for ignition.

The spindle, carved to reduce friction at one end and maximize it at the other, is held in a hole in the bottom of the bearing block, and at the other by the base board (which also is known variously as the hearth, hearth board, or fireboard). The string of the bow is wrapped once around it, so that it is tight enough not to slip during operation. A variation on this is called the "Egyptian Bow Drill", which attaches the string by wrapping it around multiple times, or actually tying it to the drill or through a hole through the drill shaft, then wrapping it.

The usual position that a person assumes whilst operating the bow drill is as follows: the right knee is placed on the ground (assuming a right-handed operator) and the arch of the left foot is on the board, pinning it in place. The left wrist, holding the handhold, is hooked around the left shin and locked in place to keep it steady so it can generate enough downward pressure and speed; achieved by pushing down with the handhold and spinning the drill. The heat of the friction between the hearth and the spindle both creates charred, fuzzy dust and causes it to ignite - forming a coal or ember. The handhold is lubricated and the spindle is carved to about thumb thickness, usually 6 to 8 inches (150 to 200 mm) long. Another option to practice is to make the "handhold" into a "mouth-hold" piece, so it's held down by pressure from the chin/mouth, leaving both hands free.

An indentation and a "v" notch into the center of the dent is made into the fireboard and the spindle is placed on it. The notch allows a place for the dust collect while it is being abraded off the spindle and the hearth. Eventually, the friction generates heat to ignite the dust, which can be used to light tinder.

A Bow drill is used to get an ember (left), the ember makes tinder smoke (center), until a fire is lit (right).

Whilst a "v" is most common, other methods to create a cavity to contain the dust whilst it is being ignited can be used. For example, drilling part-way into a hearth made by lashing two sticks together from one side, and then drilling from the other side to meet this hole; or using the area where two branches separate. This is to keep the coal off wet or snow-covered ground.[citation needed]

The hearth and spindle can both be constructed from any medium-soft, dry, non-resinous wood, and work best when both are made from the same piece of wood; however, with practice almost any wood combination can be used provided the parts contain little or no resin or moisture. The most important factor is whether the wood is dry enough to ignite, as wet wood will not work; yucca, aspen, white cedar, basswood, buckeye and most willows all work very well. Combinations such as hazel and poplar also work well. The bow should be stiff but slightly limber and around the distance from the users armpit to their fingertips. The bearing block (handhold) can be made of anything that is harder than the spindle. Bone, antler, shell and stone work best, as they can be easily greased, do not create as much friction, and do not burn; however, hard woods such as maple and tulip and red cedar are quite serviceable and often easier to find and work. Some effective materials used to grease the bearing block include sebum, animal and plant oils, or even moist vegetation.[original research?] 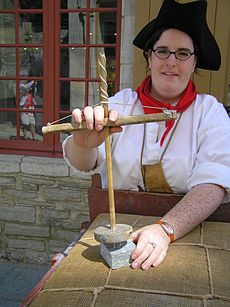 A pump drill is a simple tool used to make holes in light materials by hand and has been in use for centuries. The drill itself is composed of: the drill shaft, a narrow board with a hole through the center, a weight (usually a heavy disc) acting as a flywheel, and a length of cord. The weight is attached near the bottom of the shaft and the hole board is slipped over the top. The cordage is run through a hole near the top of the shaft and affixed to either end of the hole board so that it hangs just above the weight. The end of the shaft usually has a square hole made to fit certain sized auger bits or a simple triangular bit made to cut while rotating in both directions.[citation needed]

To use, one hand is placed on the hole board while the other turns the shaft to wind the cord around its length, thus raising the hole board to near the top where the cord becomes taut. Placing the tip against the material to be drilled and held upright, a smooth downward pressure is exerted on the board, causing the drill to rapidly spin. Once the bottom is reached, the weight is relieved and the drill allowed to rebound re-winding the cord around the shaft and the process is repeated. It is a skill simple in concept, but takes some practice to master and greatly speeds up the process of making small holes.[original research?]

A hand drill with a hearthboard.

The hand drill is a similar tool, but uses a longer, thinner spindle; and instead of a bearing block and bow combination, the downward pressure and spinning is achieved by rubbing the hands together around the spindle.[citation needed] As the hands move downward to the base, where the drill is pinched and the hands are brought quickly to the top one at a time. This can be made unnecessary by cutting a nock at the top of the drill, tying a cord through this, and then putting your thumbs through loops in the cord. However, skilled operators can either maintain pressure with their hands almost stationary vertically; or, in a movement comparable to floating, can "float" their hands back to the top of the drill. There is a more limited choice of materials to use with this method, needing much softer materials, such as mullein, yucca, cattail, and root wood.[original research?]

The strap drill is similar to the bow drill but has no bow. The socket piece is shaped to be held well by the mouth, so that both hands may be free. The strap is held between one hand and the other, and wrapped around the spindle, such that rapidly moving the hands left and right spins the spindle to create friction with the fire board as in the other techniques.