Points of the compass 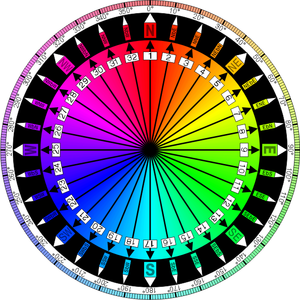 The points of the compass are points on a compass, specifically on the compass rose, marking divisions of the four cardinal directions: North, South, East, West. The number of points may be only the 4 cardinal points, or the 8 principal points adding the intercardinal (or ordinal) directions northeast (NE), southeast (SE), southwest (SW), and northwest (NW). In meteorological usage further intermediate points are added to give the sixteen points of a wind compass.[1] Finally, at the most complete in European tradition, are found the full thirty-two points of the mariner's compass.[2] In ancient China 24 points of the compass were used.[citation needed]

In the mariner's exercise of boxing the compass, all thirty-two points of the compass are named in clockwise order.[3] The names of intermediate points are formed by the initials of the cardinal directions and their intermediate ordinal directions, and are very handy to refer to a heading (or course or azimuth) in a general or colloquial fashion, without having to resort to computing or recalling degrees. For most applications, the minor points have been superseded by degrees measured clockwise from North. 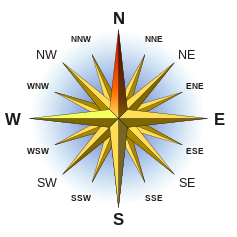 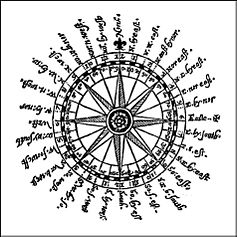 The names of the 32-wind compass rose follow these rules:

The name of a quarter-wind is typically "X by Y", where X is a principal wind and Y is a cardinal wind. As a mnemonic device, it is useful to think of "X by Y" as a shortcut for the phrase "one quarter wind from X towards Y", where a "quarter" is ​11 1⁄4°, X is the nearest principal wind, and Y the next (more distant) cardinal wind. So "Northeast by east" means "one quarter from NE towards E", "Southwest by south" means "one quarter from SW towards S". The eight principal winds, eight half-winds and sixteen quarter winds together yield a 32-wind compass rose, with each compass direction point at ​11 1⁄4° angle from the next.

The title of the Alfred Hitchcock 1959 movie, North by Northwest, is actually not a direction point on the 32-wind compass, but the film contains a reference to Northwest Airlines. Similarly, the names of the two film festivals South by Southwest and North by Northeast are not 32-wind compass points; a quarter wind whose name contains both a cardinal and an ordinal direction is named with the ordinal direction first.

The traditional compass rose of eight winds (and its 16-wind and 32-wind derivatives) was invented by seafarers in the Mediterranean Sea during the Middle Ages (the ancient Greco-Roman 12 classical compass winds have little to do with them). The traditional mariner's wind names were expressed in Italian – or, more precisely, the Italianate Mediterranean lingua franca common among sailors in the 13th and 14th centuries, that was principally composed of Genoese (Ligurian), mixed with Venetian, Sicilian, Provençal, Catalan, Greek and Arabic terms from around the Mediterranean basin. 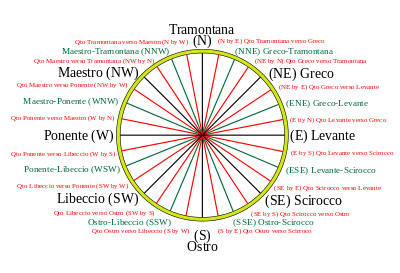 In the English compass, all wind names are constructed on the basis of the cardinal four names (N, E, S, W). In the traditional compass, one needs to memorize eight basic names – one for each of the eight principal winds (N, NE, E, SE, S, SW, W, NW.) While there are more names to memorize, the payoff is that the name construction rules for the 32-wind compass are more straightforward. The half-winds are just a combination of the two principal winds it bisects, with the shortest name usually coming first (e.g. NNE is "Greco-Tramontana", ENE is "Greco-Levante", SSE is "Ostro-Scirocco", etc.). The quarter winds are expressed with an Italian phrase, "Quarto di X verso Y" (one quarter from X towards Y, pronounced [ˈkwarto di X ˈvɛrso Y][6][7][8]) or "X al Y" (X to Y) or "X per Y" (X by Y). There are no irregularities to trip over: the nearest principal wind always comes first, the more distant one second, e.g. North-by-east is "Quarto di Tramontana verso Greco", Northeast-by-north "Quarto di Greco verso Tramontana". The names are perfectly symmetric. 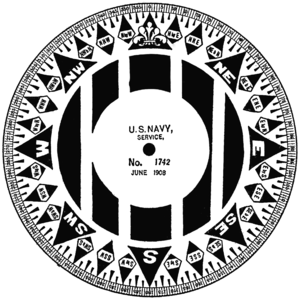 By at least the middle of the eighteenth century the 32-point system had been further extended with the use of half- and quarter-points to give a total of 128 directions.[9] These fractional points are named by appending, for example 1/4east, 1/2east, or 3/4east to the name of one of the 32 points. Each of the 96 fractional points can be named in two ways, depending of which of the two adjoining whole points is used, for example, N3/4E is equivalent to NbE1/4N. Either form is easily understood but differing conventions as to correct usage developed in different countries and organisations.

The table below shows how each of the 128 directions are named. The first two columns give the number of points and degrees clockwise from north. The third gives the equivalent bearing to the nearest degree from north or south towards east or west. The "CW" column gives the fractional-point bearings increasing in the clockwise direction and "CCW" counter clockwise. The final three columns show three common naming conventions: No "by" avoids the use of "by" with fractional points; "USN" the system used by US Navy;[10] and "RN" the Royal Navy.[11] The colour coding illustrates where each of the three naming systems matches the "CW" and "CCW" columns.

Compass roses very rarely named the fractional points and only showed small, unlabelled markers as a guide for helmsmen.