Breathing is the process that moves air in and out of the lungs, or oxygen through other respiratory organs such as gills. For organisms with lungs, breathing is also called ventilation, which includes both inhalation and exhalation. Breathing is one part of physiological respiration required to sustain life.[1] Aerobic organisms of birds, mammals, and reptiles—require oxygen to release energy via cellular respiration, in the form of the metabolism of energy-rich molecules such as glucose. Breathing is only one of the processes that deliver oxygen to where it is needed in the body and remove carbon dioxide. Another important process involves the movement of blood by the circulatory system.[2] Gas exchange occurs in the pulmonary alveoli by passive diffusion of gases between the alveolar gas and the blood in lung capillaries. Once these dissolved gases are in the blood, the heart powers their flow around the body (via the circulatory system). The medical term for normal relaxed breathing is eupnea.

In addition to removing carbon dioxide, breathing results in loss of water from the body. Exhaled air has a relative humidity of 100% because of water diffusing across the moist surface of breathing passages and alveoli. When a person exhales into very cold outdoor air, the moisture-laden atmosphere from the lungs becomes chilled to the point where the water condenses into a fog, making the exhale visible by anyone.

X-ray video of a female American alligator while breathing.

In mammals, breathing in, or inhaling, is due to the contraction and flattening of the diaphragm, a domed muscle that separates thorax and abdomen. If the abdomen is relaxed, this contraction causes the abdomen to bulge outwards, expanding the volume of the body. This increased volume causes a fall in pressure in the thorax, which causes the expansion of the lungs. When the diaphragm relaxes, air leaves largely by elasticity of the lung. This is quiet, relaxed breathing needing little energy. When need increases, the abdominal muscles resist expansion. The increased abdominal pressure then tilts the diaphragm and ribcage upwards with an increase in volume and the entry of air. Expiration follows relaxation of diaphragm and abdominal muscles, but can be increased by downward action of abdominal muscles on the rib cage. This forced expiration increases pressure across the airway's walls and may lead to narrowing and perhaps to wheezing. Speech depends on the balance between the two forms of breathing, and in humans conscious change often modifies autonomous reaction to need. The pattern can vary with fear in anticipation of need, and so with anxiety, and may be conditioned to experience such as the loss of an inhaler. It is also affected by loss of lung elasticity in age or pulmonary disease, of abdominal expansion from obesity, or of muscle power to resist expansion or to pull the ribcage down. Ten muscles are used for inspiration:[3]

Eight are used for forced expiration:[4]

In amphibians, the process used is positive pressure breathing. Muscles lower the floor of the oral cavity, enlarging it and drawing in air through the nostrils (which uses the same mechanics - pressure, volume, and diffusion - as a mammalian lung). With the nostrils and mouth closed, the floor of the oral cavity is forced up, which forces air down the trachea into the lungs.

It is often considered superior to mouth breathing[6][7] for several reasons. Air travels to and from the external environment and the lungs through the nasal passages, as opposed to the mouth. The nasal passages do a better job of filtering the air as it enters the lungs. In addition, the smaller diameter of the nasal passages creates pressure in the lungs during exhalation, allowing the lungs to have more time to extract oxygen from them. When there is proper oxygen-carbon dioxide exchange, the blood will maintain a balanced pH. If carbon dioxide is lost too quickly, as in mouth breathing, oxygen absorption decreases. Nasal breathing is especially important in certain situations such as dehydration, cold weather, laryngitis, and when the throat is sore or dry because it does not dry the throat as much.

Breathing is one of the few bodily functions which, within limits, can be controlled both consciously and unconsciously.

Conscious control of breathing is common in many forms of meditation, specifically forms of yoga for example pranayama.[8]

In swimming, cardio fitness, speech or vocal training, one learns to discipline one's breathing, initially consciously but later sub-consciously, for purposes other than life support.

Also breathing control is used in Buteyko method, an alternative physical therapy that proposes the use of breathing exercises as a treatment for asthma and other conditions.

Unconsciously, breathing is controlled by specialized centers in the brainstem, which automatically regulates the rate and depth of breathing depending on the body’s needs at any time. When carbon dioxide levels increase in the blood, it reacts with the water in blood, producing carbonic acid. Lactic acid produced by fermentation during exercise also lowers pH. The drop in the blood's pH stimulates chemoreceptors in the carotid and aortic bodies as well as those inside the respiratory center in the medulla oblongata. Chemoreceptors send more nerve impulses to the respiration centre in the medulla oblongata and pons in the brain. These, in turn send nerve impulses through the phrenic and thoracic nerves to the diaphragm. 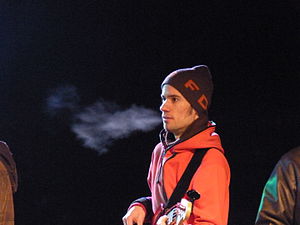 For instance, while exercising, the level of carbon dioxide in the blood increases due to increased cellular respiration by the muscles, which activates carotid and aortic bodies and the respiration center, which ultimately cause a higher rate of respiration.

During rest, the level of carbon dioxide is lower, so breathing rate is lower. This ensures an appropriate amount of oxygen is delivered to the muscles and other organs. It is important to reiterate that it is the buildup of carbon dioxide making the blood acidic that elicits the desperation for a breath much more than lack of oxygen.

It is not possible for a healthy person to voluntarily stop breathing indefinitely. If one does not inhale, the level of carbon dioxide builds up in the blood, and one experiences overwhelming air hunger. This irrepressible reflex is not surprising given that without breathing, the body's internal oxygen levels drop dangerously low within minutes, leading to permanent brain damage followed eventually by death. However, there have been instances where people have survived for as long as two hours without air; this is only possible when submerged in cold water, as this triggers the mammalian diving reflex[9] as well as putting the subject into a state of suspended animation.

If a healthy person were to voluntarily stop breathing (i.e. hold his or her breath) for a long enough amount of time, he or she would lose consciousness, and the body would resume breathing on its own. Because of this one cannot commit suicide with this method, unless one's breathing was also restricted by something else (e.g. water, see drowning).

Hyperventilating causes a drop in CO2 below normal levels, lowering blood and oxygen supply to vital organs due to CO2-induced vasoconstriction and suppressed Bohr effect. Voluntary hyperventilation can cause tissue oxygen levels to go to dangerously low levels leading to, for example, fainting due to brain hypoxia.

The air we inhale is roughly composed of (by volume):[10]

In addition to air, underwater divers often breathe oxygen-rich or helium-rich gas mixtures. Oxygen and analgesic gases are sometimes given to patients under medical care. The atmosphere in space suits is pure oxygen. Also our reliance on this relatively small amount of oxygen can cause overactivity or euphoria in pure or oxygen-rich environments.[11]

Additionally vapors and trace gases are present: 5% water vapor, several parts per million (ppm) of hydrogen and carbon monoxide, 1 part per million (ppm) of ammonia and less than 1 ppm of acetone, methanol, ethanol (unless ethanol has been ingested, in which case much higher concentrations would occur in the breath, cf. Breathalyzer) and other volatile organic compounds. Oxygen is used by the body for cellular respiration and other uses, and carbon dioxide is a product of these processes. The exact amount of exhaled oxygen and carbon dioxide when breathing and the amount of gases exhaled may vary based on diet, exercise and fitness.

Atmospheric air at altitude is at a lower pressure than at sea level due to the lesser weight of the air above. This lower pressure can lead to altitude sickness, or hypoxia.

Gases breathed underwater are at higher pressure than at sea level due to the added weight of water. This can lead to nitrogen narcosis, oxygen toxicity, or decompression sickness.

In t'ai chi ch'uan, aerobic training is combined with breathing to exercise the diaphragm muscles and to train effective posture; making better use of the body's energy. In music, breath is used to play wind instruments and many aerophones. Laughter, physically, is simply repeated sharp breaths. Hiccups, yawns, and sneezes are other breath-related phenomena.

Ancients commonly linked the breath to a life force. The Hebrew Bible refers to God breathing the breath of life into clay to make Adam a living soul (nephesh). It also refers to the breath as returning to God when a mortal dies. The terms "spirit," "qi," "prana" and "psyche"[12] are related to the concept of breath. Also cognate are Polynesian Mana and Hebrew ruach.

In his book Your Atomic Self: The Invisible Elements That Connect You to Everything Else in the Universe, excerpted in Wired Magazine, Curt Stager explores the atomic and molecular basis of links through which breathing connects humans and other Aerobic organisms of birds, mammals, and reptiles to the entire planet.[13]

Common phrases in English relate to breathing e.g. "catch my breath", "took my breath away", "inspiration", "to expire".