Bridge of Independent Lists (Croatian: Most nezavisnih lista, Most) is a party platform in Croatia founded in 2012. The party is led by Božo Petrov, its founder and Deputy Prime Minister in the Cabinet of Tihomir Orešković .[7] 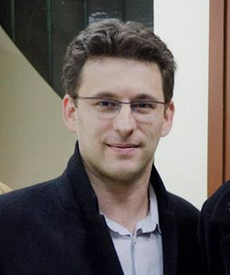 Božo Petrov, founder of Most and the Deputy Prime Minister of Croatia

Bridge of Independent Lists was founded in Metković on 17 November 2012 as a regionalist political platform mostly by people who have never actively participated in political life. The first party president was Božo Petrov.[8]

In 2013 Bridge of Independent Lists participated in the local elections in the town of Metković. The party won 46.25% of votes, and 9 out of 17 seats in the City Council. Turnout was 67,49%.[9] Božo Petrov won 45.78% of the votes and entered the second round of elections for the Mayor against Stipo Gabrić Jambo, incumbent mayor since 1997. In the second round Petrov won with 67.94% of the votes and became the mayor of Metković. At the same election, Bridge of Independent Lists won 9.97% of the vote in county elections and entered the County Assembly of the Dubrovnik-Neretva County.[10]

For the 2015 parliamentary elections the party went national and was joined by independent local politicians from other parts of the country.[11]

The party campaigned for fiscal responsibility, reduction of government spending and public debt, tax cuts, reforms in the public sector and the reduction of administrative divisions in Croatia.[12][13] The party supports an expansionary monetary policy and monetary reforms that would include the Croatian National Bank introducing a low interest policy to foster economic growth. It also favors the entry of private healthcare into the Croatian healthcare system and establishing a public "Agrobank" to promote agricultural and regional development.[14]

The party won 19 seats in the Croatian Parliament and came third behind the ruling centre-left Croatia is Growing coalition and the centre-right opposition Patriotic Coalition.[15]

On November 11, 2015 Drago Prgomet was expelled from Most for holding private talks with Prime Minister Zoran Milanović without the knowledge of other members of the party's leadership.[17] On November 29, 2015, Gordana Rusak announced that she won't join Most parliamentary club.[18] On the following day, Irena Petrijevčanin Vuksanović announced the same decision.[19] Prgomet, Rusak and Petrijevčanin Vuksanović decided to form parliamentary club with their Croatian Dialogue Initiative party. Stipe Petrina also refused to give support to MOST due to disagreement with Božo Petrov over running the Party. He expressed his support to Croatia is Growing coalition.[20]

After more than 40 days of negotiations and numerous turnarounds, Most decided to form a government with the Patriotic Coalition led by the Croatian Democratic Union, giving them a slim majority of 78 seats. They nominated the Croatian-Canadian businessman Tihomir Orešković to be the next Prime Minister of Croatia.[21] The government cabinet was formed on 22 January 2016 and party president Božo Petrov was named Deputy Prime Minister. Along with Petrov, 5 ministers in the new government are from Most.[22]

The following is a summary of the party's results in legislative elections for the Croatian parliament.