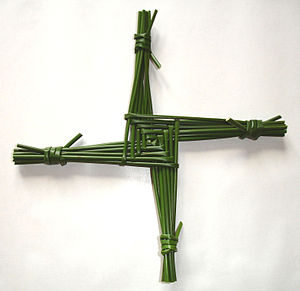 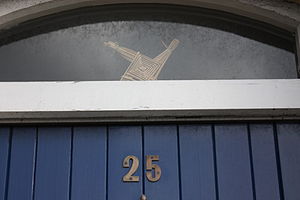 Brigid's cross set over a doorway 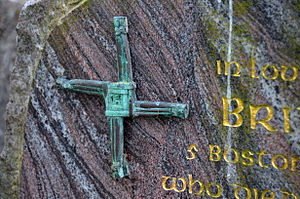 A Brigid's cross symbol on a gravestone in Ireland

Brigid's cross or Brigit's cross (Irish: Cros Bríde, Crosóg Bríde or Bogha Bríde) is a small cross usually woven from rushes. Typically it has four arms tied at the ends and a woven square in the middle. Historically, there were also three-armed versions.[1][2] It is suggested that the cross has pre-Christian origins and is related to the sun cross.[citation needed]

Brigid's crosses are associated with Brigid of Kildare, one of the patron saints of Ireland. The crosses are traditionally made in Ireland on St Brigid's feast day, 1 February, which was formerly celebrated as a pagan festival (Imbolc) marking the beginning of spring. Many rituals are associated with the making of the crosses.[3] Traditionally they were set over doorways and windows to protect the home from any kind of harm.[4]

The presence of the Brigid's cross in Ireland is likely far older than Christianity. The Goddess Brigid was one of the Tuatha Dé Danann. Her feast day was the feast of Imbolc, and the cross made of rushes today is very likely the descendant of a pagan symbol whose original meaning may have been locally understood even into the early 20th century in rural Ireland. One remnant of that tradition in the meaning of the Brigid's Cross today, is that it is said to protect a house from fire. This does not fit with any part of the Christian story of St Brigid, and so is likely a part of the older spiritual tradition behind the feast day.[5][6]

In Christianity, St Brigid and her cross are linked together by a story about her weaving this form of cross at the death bed of either her father or a pagan lord, who upon hearing what the cross meant, asked to be baptized. One version goes as follows:

A pagan chieftain from the neighborhood of Kildare was dying. Christians in his household sent for Brigid to talk to him about Christ. When she arrived, the chieftain was raving. As it was impossible to instruct this delirious man, hopes for his conversion seemed doubtful. Brigid sat down at his bedside and began consoling him. As was customary, the dirt floor was strewn with rushes both for warmth and cleanliness. Brigid stooped down and started to weave them into a cross, fastening the points together. The sick man asked what she was doing. She began to explain the cross, and as she talked, his delirium quieted and he questioned her with growing interest. Through her weaving, he converted and was baptized at the point of death. Since then, the cross of rushes has existed in Ireland.

To some extent, the Brigid's cross has become one of the symbols of Ireland, along with the shamrock and harp.[7] The Brigid's cross featured in the idents used for RTÉ Television, the state broadcaster, from the original 1960 design until the 1990s.[8][9][10] It was formerly the symbol of the Department of Health,[11] and remains in the logo of An Bord Altranais, the Irish Nursing Board.[12]