Brillante Mendoza (born 30 July 1960) is a Filipino film director.[1] He was born and raised in San Fernando, Pampanga. He took Advertising Arts of the then College of Architecture and Fine Arts at the University of Santo Tomas.[2] 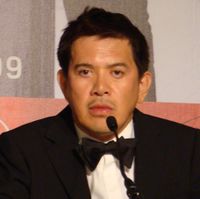 His 2012 film Thy Womb competed for the Golden Lion at the 69th Venice International Film Festival.[6] His film Taklub has been selected to be screened in the Un Certain Regard section at the 2015 Cannes Film Festival.[7]