Bristol is a town in the historic county seat of Bristol County, Rhode Island, United States.[3] The population was 22,954 at the 2010 census. Bristol, a deepwater seaport, is named after Bristol, England.

The first battle of King Philip's War took place here in 1675; although Philip was eventually defeated, a variant of his Indian name, Metacomet, is now the name of a main road in Bristol: Metacom Avenue (RI Route 136).

King Philip made nearby Mount Hope (Montaup) his base of operations. "King Philip's Chair", a rocky ledge on the mountain, was a lookout site for enemy ships on Mount Hope Bay. After that war concluded, the town was settled in 1680 as part of the Plymouth Colony. It was presumably named after Bristol, England.

During the American Revolutionary War, the British Navy bombarded Bristol twice. On October 7, 1775, a group of ships led by Captain Wallace and the HMS Rose sailed into town and demanded provisions. When refused, Wallace shelled the town, causing much damage. The attack was stopped when Lieutenant Governor William Bradford rowed out to the Rose to negotiate a cease-fire, but then a second attack took place on May 25, 1778. This time, 500 British and Hessian troops marched through the main street (now called Hope Street (RI Route 114)) and burnt 30 barracks and houses, taking some prisoners to Newport.

Until 1854, Bristol was one of the five state capitals of Rhode Island.

A view of Bristol RI from the harbor. 1886 engraving.

The southerly terminus of the East Bay Bike Path[4] is located at Independence Park on Bristol Harbor. The bike path continues north to East Providence, R.I. Constructed on an old abandoned railway, some of the best views of Narragansett Bay can be seen along this magnificent corridor. This path is a valued commodity to Bristol, it allows bikers, roller skaters and walkers to enjoy the area. The construction of the East Bay Bike Path was highly contested by Bristol residents before construction because of the potential of crime, the Bike Path has become a welcome asset to the community, and the anticipated crime was non-existent.

The Bristol-based boat company Herreshoff built five consecutive America's Cup Defenders between 1893 and 1920. The Colt Estate, now known as Colt Park, was home to Samuel P. Colt, nephew of the man famous for the arms company. Colt Park lies on magnificently manicured gardens abutting the West Passage of Narragansett Bay, and is popular for its unparalleled views of the waterfront and spectacular sunsets.

Bristol is the site of one National Historic Landmark, the Joseph Reynolds House built in 1700. The Marquis de Lafayette and his staff in 1778 used the building as headquarters during the Battle of Rhode Island.[5]

Bristol has the oldest continuously celebrated Independence Day festivities in the United States. The first mention of a celebration comes from July 1777, when a British officer noted sounds coming from across Narragansett Bay:

This being the first anniversary of the Declaration of Independence of the Rebel Colonies, they ushered in the morning by firing 13 cannons, one for each colony, we suppose. At sunset, the rebel frigates fired another round of 13 guns, each one after the other. As the evening was very still and fine the echo of the guns down the Bay had a grand effect.[citation needed]

The annual official and historic celebrations (Patriotic Exercises) were established in 1785 by Rev. Henry Wight of the First Congregational Church and veteran of the Revolutionary War, and later by Rev. Wight as the Parade, and continue today, organized by the Bristol Fourth of July Committee.[6] The festivities officially start on June 14, Flag Day, beginning a period of outdoor concerts, soap-box races and a firefighters' muster at Independence Park. The celebration climaxes on July 4 with the oldest annual parade in the United States, "The Military, Civic and Firemen's Parade", an event that draws over 200,000 people from Rhode Island and around the world. These elaborate celebrations give Bristol its nickname, "America's most patriotic town". In 2009, a Tea Party group was briefly banned from future participation when they were accused of handing out political literature, including the Declaration of Independence, from a float in violation of parade rules.[7][8] Also in 2009, Bristol ranked No. 9 on Newsmax magazine's list of the "Top 25 Most Uniquely American Cities and Towns", a piece written by current CBS News travel editor Peter Greenberg. In determining his ranking, Greenberg cited Bristol's Independence Day celebration.[9] 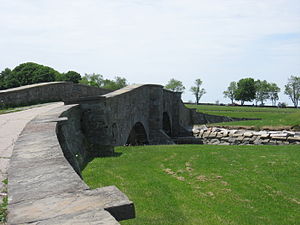 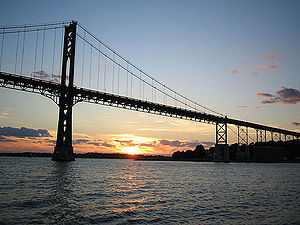