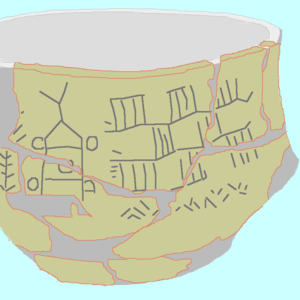 A drawing of the Bronocice pot 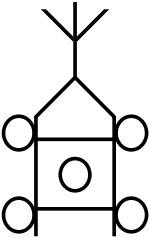 A representation of the key element on the pot.

The Bronocice pot is a ceramic vase incised with the earliest known image of what may be a wheeled vehicle. It was dated by the radiocarbon method to 3635–3370 BC[1] and is attributed to the Funnelbeaker archaeological culture. Today it is housed in the Archaeological Museum in Kraków, Poland.

The pot was discovered in 1976 during the archaeological excavation of a large Neolithic settlement in Bronocice by the Nidzica River, ca. 50 km to north east of Kraków. The excavations were carried out between 1974 and 1980 by the Institute of Archaeology and Ethnology of the Polish Academy of Arts and Sciences and the State University of New York at Buffalo (USA).

The picture on the pot symbolically depicts key elements of the prehistoric human environment. The most important component of the decoration are five rudimentary representations of what seems to be a wagon. They represent a vehicle with a shaft for a draught animal, and four wheels. The lines connecting them probably represent axles. The circle in the middle possibly symbolizes a container for harvest. Other images on the pot include a tree, a river and what may be fields intersected by roads/ditches or the layout of a village.

The image on the pot is the oldest well-dated representation of a 4-wheeled vehicle in the world.[2] It suggests the existence of wagons in Central Europe as early as in the 4th millennium BC. They were presumably drawn by aurochs whose remains were found with the pot. Their horns were worn out as if tied with a rope, possibly a result of using a kind of yoke.