The Bronx–Whitestone Bridge (colloquially referred to as the Whitestone Bridge or simply the Whitestone) is a suspension bridge in New York City that crosses the East River and connects the boroughs of Queens on Long Island, and the Bronx on the United States mainland via Interstate 678. The bridge was designed by Othmar Ammann and opened to traffic with four lanes on April 29, 1939.[3]

The Bronx–Whitestone Bridge is owned by New York City and operated by the MTA Bridges and Tunnels, an affiliate agency of the Metropolitan Transportation Authority. 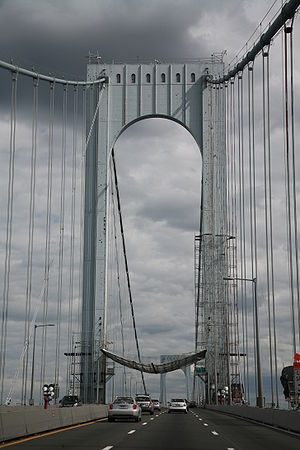 Roadway on the Bronx-Whitestone Bridge

Aerial view of the Bronx-Whitestone Bridge 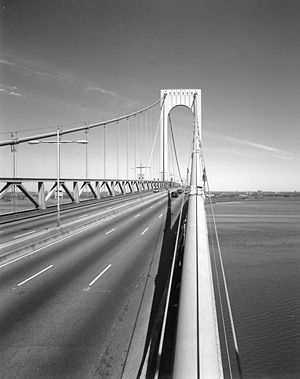 View of the roadway and a tower, prior to removal of stiffening trusses 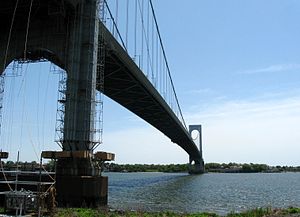 The idea for a crossing between the Bronx and Whitestone, Queens had come as early as 1905. At the time, residents around the proposed area of the bridge protested construction in fear of losing the then-rural character of the community. In 1929, however, the Regional Plan Association had proposed another bridge from the Bronx to northern Queens to allow motorists from upstate New York and New England to reach Queens and Long Island without traveling through the traffic-ridden communities of western Queens.[4] On February 25, 1930, influential planner Robert Moses proposed a Ferry Point Park-Whitestone Bridge as a part of his Belt Parkway system around Brooklyn and Queens.

As the 1930s progressed, Moses found his bridge increasingly necessary to directly link the mainland to the 1939 New York World's Fair and to LaGuardia Airport (then known as North Beach Airport). In addition, the Whitestone Bridge was to provide congestion relief to the Triborough Bridge. The New York Legislature approved Moses' plan in April 1937. Moses had raised controversy when he quickly decided to demolish seventeen homes in the Queens community of Malba. Moses argued such measures were necessary to complete the bridge on schedule. The RPA had also said that the Whitestone Bridge should have rail connections, or at least be able to accommodate them in the future, but had no allies on the project, to Moses' relief.

Designer Othmar Ammann had several plans for the bridge that would keep construction on its tight schedule. The two 377-foot (115 m) towers were constructed in a short 18 days and were the first to have no diagonal cross bracing. Unlike other suspension bridges, the Whitestone Bridge did not have a stiffening truss system. Instead, 11-foot (3.4 m) I-beam girders gave the bridge an art deco streamlined appearance.

The Bronx–Whitestone Bridge opened on April 29, 1939, in festivities led by then-Mayor of New York City Fiorello H. La Guardia.[3] The bridge featured pedestrian walkways as well as four lanes of vehicular traffic, which carried 17,000 vehicles per day during the year 1940. The toll was 25 cents. The new "Whitestone" or Type 41 lamp post was later used in many other projects.[5] The 2,300-foot (700 m) center span was the fourth longest in the world at the opening. However, Ammann's plan to use I-beam girders proved to be a poor one after the collapse of the original Tacoma Narrows Bridge in Washington (known as Galloping Gertie for the effect wind had on the structure). The Bronx–Whitestone Bridge used the same general design as the Tacoma Narrows Bridge. The Narrows Bridge employed an 8-foot (2.4 m) deep girder system, much like the 11-foot (3.4 m) I-beam girders of the Whitestone Bridge. To mitigate the risk of failure from high winds, eight stay cables (two per tower per side) were installed for added stability in 1940.

Starting in 1943, the pedestrian walkways were removed from the bridge allowing for vehicular traffic expansion by the creation of two more vehicular lanes. The project's primary goal was to reinforce the bridge with trusses after the Tacoma Narrows Bridge disaster. The four lanes of roadway traffic were widened to six lanes and 14-foot (4.3 m) high steel trusses were installed on both sides of the deck to weigh down and stiffen the bridge in an effort to reduce oscillation. These trusses detracted from the former streamlined looking span. In 2003, the Metropolitan Transit Authority restored the classic lines of the bridge by removing the stiffening trusses and installing fiberglass fairing along both sides of the road deck. The lightweight fiberglass fairing is triangular in shape giving it an aerodynamic profile “that slices the wind as it passes over the bridge."[6][7] The removal of the trusses and other changes to the decking cut the bridge's weight by 6,000 tons, some 25% of the mass suspended by the cables.[8]

The Metropolitan Transportation Authority planned to spend $286 million in bridge renovations, which started in August 2001. These renovations, which are still in progress, include removing the cable stays installed in the 1940s, removing the 14-foot (4.3 m) trusses (which proved to be too heavy for the bridge's suspension cables, which were not designed to hold such weight), adding mass dampers to stabilize the bridge deck, repainting the two towers and the deck of the bridge, upgrading the lighting systems (including the beacons of the bridge and bulbs), and installing variable message signs. Replacing the deck of the bridge and assisting in lightening the deck by 6,000 tons are projected to be done by 2008.[9] The bridge remains in service during overhaul, but a reduced number of lanes lead to traffic backups and signs suggesting use of the Throgs Neck Bridge. Trucks over 40 tons have been prohibited from using the span since 2005.

After the removal of the sidewalks starting in 1943, bicyclists were able to use QBx1 buses of the Queens Surface Corporation, which could carry bicycles on the front-mounted bike racks. However, since the Metropolitan Transportation Authority absorbed the bus routes formerly operated by Queens Surface, the bike racks have been eliminated.[12] Bicyclists are now forced to detour to the Triborough Bridge or possibly try hitchhiking across, which is illegal[13] and considered very dangerous. Whether a bikeway or walkway will be constructed on the bridge in the future is uncertain.