History of the Jews in Bulgaria 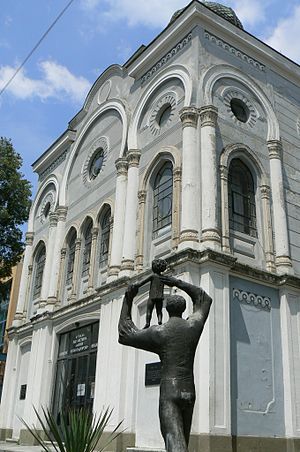 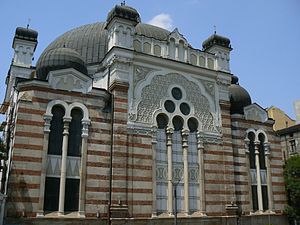 Jews have had a continuous presence in historic Bulgarian lands since before the 2nd century CE, and have often played an important part in the history of Bulgaria.

Today, the majority of Bulgarian Jews live in Israel, while modern-day Bulgaria continues to host a modest Jewish population.

Jews are believed to have settled in the region after the Roman conquest[when?]. Ruins of "sumptuous"[3] second century synagogues have been unearthed in Philipopolis[4] (now Plovdiv), Nikopol, Ulpia Oescus[5] (modern day Gigen, Pleven Province), and Stobi[6] (now in Macedonia).[3] The earliest written artifact attesting to the presence of a Jewish community in the Roman province of Moesia Inferior is a late 2nd century CE Latin inscription found at Ulpia Oescus bearing a menorah and mentioning archisynagogos. Josephus testifies to the presence of a Jewish population in the city. A decree of Roman Emperor Theodosius I from 379 regarding the persecution of Jews and destruction of synagogues in Illyria and Thrace is also proof of early Jewish settlement in Bulgaria.

After the establishment of the First Bulgarian Empire and its recognition in 681, a number of Jews suffering persecution in the Byzantine Empire may have settled in Bulgaria. Jews also settled in Nikopol in 967. Some arrived from the Republic of Ragusa and Italy, when merchants from these lands were allowed to trade in the Second Bulgarian Empire by Ivan Asen II. Later, Tsar Ivan Alexander married a Jewish woman, Sarah (renamed Theodora), who had converted to Christianity and had considerable influence in the court. She influenced her spouse to create the Tsardom of Vidin for her son Ivan Shishman, who was also a Jew according to the Matrilineality in Judaism. A church council of 1352 led to the excommunication of heretics and Jews, and three Jews who had been sentenced to death were killed by a mob despite the sentence's having been repealed by the tsar.

The medieval Jewish population of Bulgaria was Romaniote until the 14th-15th century, when Ashkenazim from Hungary (1376) and other parts of Europe began to arrive.

See also: History of the Jews in Turkey

By the completion of the Ottoman conquest of the Bulgarian Empire (1396), there were sizable Jewish communities in Vidin, Nikopol, Silistra, Pleven, Sofia, Yambol, Plovdiv (Philippopolis) and Stara Zagora.

In 1470, Ashkenazim banished from Bavaria arrived, and contemporary travellers remarked that Yiddish could often be heard in Sofia. An Ashkenazi prayer book was printed in Saloniki by the rabbi of Sofia in the middle of the 16th century. Beginning in 1494, Sephardic exiles from Spain migrated to Bulgaria via Salonika, Macedonia, Italy, Ragusa, and Bosnia. They settled in pre-existing Jewish population-centres, which were also the major trade centres of Ottoman-ruled Bulgaria. At this point, Sofia was host to three separate Jewish communities: Romaniotes, Ashkenazim and Sephardim. This would continue until 1640, when a single rabbi was appointed for all three groups.

In the 17th century, the ideas of Sabbatai Zevi became popular in Bulgaria, and supporters of his movement, such as Nathan of Gaza and Samuel Primo, were active in Sofia. Jews continued to settle in various parts of the country (including in new trade centres such as Pazardzhik), and were able to expand their economic activities due to the privileges they were given and due to the banishment of many Ragusan merchants who had taken part in the Chiprovtsi Uprising of 1688.

A modern nation-state of Bulgaria was formed under the terms of the Treaty of Berlin, which ended the Russo-Turkish War of 1877–78. Under the terms of that treaty, Bulgarian Jews of the new country were granted equal rights. Jews were drafted into the Bulgarian army and fought in the Serbo-Bulgarian War (1885), in the Balkan Wars (1912-13), and in the First World War. 211 Jewish soldiers of the Bulgarian army were recorded as having died during World War I.[3] The Treaty of Neuilly after World War I emphasized Jews' equality with other Bulgarian citizens.[citation needed] In 1936, the nationalist and anti-semitic organization Ratnik was established.

In the years preceding World War II, the population growth rate of the Jewish community lagged that of other ethnic groups. In 1920, there were 16,000 Jews, amounting to 0.9% of Bulgarians. By 1934, although the size of the Jewish community had grown to 48,565, with more than half living in Sofia, that only amounted to 0.8% of the general population. Ladino was the dominant language in most communities, but the young often preferred speaking Bulgarian. The Zionist movement was completely dominant among the local population ever since Hovevei Zion.[citation needed] 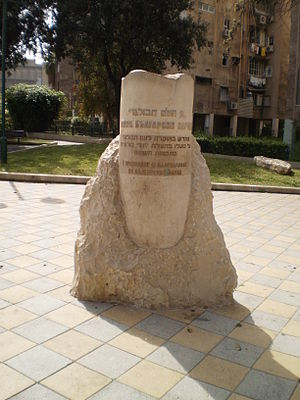 Monument in honour of the Bulgarian people who saved Bulgarian Jews during the Holocaust, Jaffa

In December 1940, 352 members of the Bulgarian Jewish community boarded the S.S. Salvador at Varna bound for Palestine. The boat ran aground 100 meters off the coast of Silivri, west of Istanbul, and sank. 223 passengers drowned or died of exposure in the frigid waters. Half the survivors were sent back to Bulgaria while the remainder were allowed to board the Darien II, but were imprisoned at Atlit by the British Mandate authorities.[7]

In 1941, the Bulgarian Parliament and Tsar Boris III enacted the Law for Protection of the Nation, which imposed numerous legal restrictions on Jews in Bulgaria. Specifically, the law prohibited Jews from voting, running for office, working in government positions, serving in the army, marrying or cohabitating with ethnic Bulgarians, using Bulgarian names, or owning rural land. Authorities began confiscating all radios and telephones owned by Jews, and Jews were forced to pay a one-time tax of 20 percent of their net worth.[8][9][10][11] The legislation also established quotas that limited the number of Jews in Bulgarian universities.[11][12] The law was protested not only by Jewish leaders, but also by the Bulgarian Orthodox Church, some professional organizations, and twenty-one writers.[11][13]

Bulgaria's 48,000 Jews were saved from deportation to Nazi concentration camps with the help of Dimitar Peshev, leaders of the Bulgarian Church, led by Metropolitan Stefan of Sofia, Tsar Boris, and ordinary citizens.[14][15]

On the eve of the planned deportations, the Bulgarian government asked for a breakdown of the German plans for the destinations of the deportees, and was told that roughly one-half would be employed in agriculture in Greater Germany and one-fourth, reported to be semi-skilled laborers, would be "allowed to redeem themselves" by "volunteering to work" in the war industries of the Ruhr Valley, while the remaining one-fourth would be transported to the General Government (German-occupied Poland) for employment in "work directly connected to the war". (This information was also distributed to the neutral countries via German diplomatic channels and was reported on March 24, 1943, in the New York Times from Berne, Switzerland, along with the cynical statement that "the former death rate in the Jewish colonies of occupied Poland has shown a considerable decrease in the past three months", the reason given being that "now many of the male Jews are employed in army work near the fighting zones", and were receiving approximately the same rations as German soldiers.)

Hesitating to comply with German deportation requests in late 1942 and early 1943, following rumors of mistreatment of Jews transported to Poland, the Bulgarian government made use of Swiss diplomatic channels to inquire whether it was possible to deport the Jews to British-controlled Palestine by ships across the Black Sea. However, this attempt was blocked by British Foreign Minister, Anthony Eden.[16] Following that failure, the Bulgarian authorities permitted Germany to deport the majority of non-Bulgarian Jews residing in Bulgarian-occupied parts of Greece and Yugoslavia. The Bulgarian Government even discussed the cost of deportation with Nazi Germany, as recorded in the German Archives, which document that Nazi Germany paid the Bulgarian Government 7,144.317 leva for the deportation of 3,545 adults and 592 children to the killing camp at Treblinka.[17] Thus, 4,500 Jews from Greek Thrace and Eastern Macedonia were deported to Poland, while 7,144 from Vardar Macedonia and Pomoravlje were also sent to Treblinka. None of them survived.[18]

Although Bulgaria effectively controlled these regions immediately beyond its borders, the German authorities recognized only the Bulgarian military administration and not the civil one. Bulgaria granted citizenship to all ethnic Bulgarians living in occupied territory, and also to those of other ethnicities who wished to acquire it, with the exception of the Jews.[19] The territories of Aegean Thrace, Macedonia and other lands controlled by Bulgaria during World War II were not considered Bulgarian although they were administered by Bulgaria. On March 4, 1943, Bulgarian soldiers, assisted by German soldiers, took the Jews from Komotini and Kavala off the passenger steamship Karageorge, massacred them, and sunk the vessel. The Bulgarians also confiscated all of the Jewish properties and possessions.[20] In contrast with the old Bulgarian territories, where widespread protests against the deportations took place, including petitions to the government in Sofia, in Aegean Thrace and Macedonia such organized movements were lacking.[14]

As for the Jews in the kingdom of Bulgaria itself, German requests for their deportation to concentration camps were not complied with. Later, Bulgaria was officially thanked by the government of Israel for its defiance of Nazi Germany. This story was kept secret by the Soviet Union, because the royal Bulgarian government, the King of Bulgaria and the Church were responsible for the huge public outcry at the time, causing the majority of the country to defend its Jewish population. The communist Soviet regime could not countenance credit to be given to the former authorities, the Church, or the King, as all three were considered enemies of communism. Thus, the documentation proving the saving of Bulgaria's Jews only came to light after the end of the Cold War in 1989. The number of 48,000 Bulgarian Jews was known to Hitler, yet not one was deported or murdered by the Nazis.[14] In 1998, to thank Tsar Boris, Bulgarian Jews in the United States and the Jewish National Fund erected a monument in the Bulgarian Forest in Israel honoring Tsar Boris. However, in July, 2003, a public committee headed by Chief Justice Dr. Moshe Beiski decided to remove the memorial because Bulgaria had consented to the delivery of the Jews from occupied territories of Macedonia and Thrace to the Germans.[21]

The Bulgarian occupational zone included neither Thessaloniki, with over 55,000 Jews, nor the westernmost part of Vardar Macedonia, including the towns of Debar, Struga, and Tetovo, which were part of Italian-occupied Albania.[22] The Bulgarian authorities did offer protection to Jews who were not Bulgarian nationals residing in Bulgaria proper, including those who had fled there from Nazi occupied regions in other countries.

After World War II and Diaspora

After the war and the establishment of a Communist government, most of the Jewish population left for Israel, leaving only about a thousand Jews living in Bulgaria today (1,162 according to the 2011 census). According to Israeli government statistics, 43,961 people from Bulgaria emigrated to Israel between 1948 and 2006, making Bulgarian Jews the fourth largest group to come from a European country, after the Soviet Union, Romania and Poland.[23]

The various migrations outside of Bulgaria has produced descendants of Bulgarian Jews mainly in Israel, but also in USA, Canada, and some Western European countries.

Info from the Bulgarian censuses, with the exception of 2010:[24]