Bus Éireann (Irish pronunciation: [ˈbˠɔsˠ ˈeːɾʲən̪ˠ], Irish Bus) is a bus and coach operator providing services throughout Ireland with the exception of Dublin Region bus services which are provided by Dublin Bus. It is a subsidiary of Córas Iompair Éireann. The company's primary hub is Busáras – Central Bus Station, located in Store Street, Central Dublin. 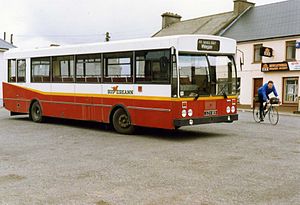 GAC Ireland in Scariff in April 1989 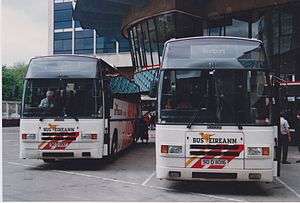 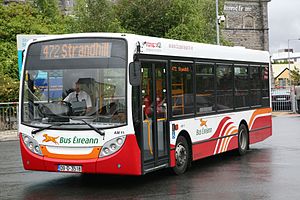 Bus Éireann was established in February 1987 when it was split out from the Córas Iompair Éireann.[1] The logo of Bus Éireann incorporates a red Irish Setter, a breed of dog which originated in Ireland.

Bus Éireann's main services in the Republic of Ireland and in Northern Ireland in association with Ulsterbus include: expressway (intercity), commuter, local and school services. Additional services within Ireland include city services in Cork, Galway, Limerick and Waterford and town services in Athlone, Balbriggan, Drogheda, Dundalk, Navan and Sligo.

Bus Éireann operate international services to Great Britain and Europe are also provided via the ports at Dublin and Rosslare Europort. Cities served include London, Birmingham, Manchester, Liverpool and Leeds. These are operated under the Eurolines brand.

The National Development Plan included a large expansion in commuter services, especially in the greater Dublin area, and so the company greatly increased services on routes such as Dublin/Drogheda/Dundalk, Dublin/Ashbourne, Dublin/Ratoath, Dublin/Dunshaughlin/Navan/Kells/Cavan.[2]

The Dublin/Dublin Airport/Newry/Belfast route is jointly operated by Bus Éireann and Ulsterbus. At the time of the establishment of the company in February 1987, there were no bus services between Dublin and Belfast. Now there is an hourly service each way, from 06:00 to 21:00. In October 2006, further services were introduced on this route, departing at 01:00, 03:00, 05:00, and 23:00, thus the route became the first "24-hour service" in the country.[3] The service has since been upgraded to an hourly service, 24 hours a day. A similar service is to be implemented on the 002 route between Dublin Airport and Wexford, starting 18 January 2009. Services depart Dublin Airport for Wexford on the hour from 05:00 to 23:00, with services during the night at 01:00 and 03:00.[4]

Bus Éireann has stated that they also intend to develop similar services to the 24-hour Dublin-Belfast route on the following routes: Donegal-Dublin, Ballina-Dublin, Sligo-Dublin and Drogheda-Balbriggan-Dublin Airport-Dublin.[3]

On 20 January 2009, Bus Éireann announced that it was to let 320 staff go and withdraw 150 buses due to the economic crisis. Some services are being permanently withdrawn or being reduced due to the cutbacks.[5]

Bus Éireann operates special one-day sightseeing tours from Dublin to locations such as Glendalough, Newgrange; from Cork, day tours to the Ring of Kerry, County Clare, West Cork and Cape Clear Island; and from Galway, tours of Connemara and the Burren. 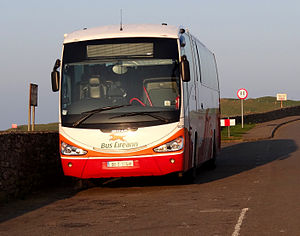 The Bus Arrival Information Service is being rolled out across Cork and Dublin, and is supposed to provide real time estimates of bus arrivals at certain bus stops, based on current GPS locations of buses. It is being run by the National Transport Authority under the brand Transport for Ireland, a single portal providing information on public transport in Ireland.

Bus Éireann's bus stations have been upgraded in many locations around the country.[citation needed] the prime example is Cork bus station, located at Parnell Place in the city centre, which was remodelled as part of the city's preparation for being European Capital of Culture, 2005.

Bus Éireann has had a few fatal incidents in recent years, with those involving school buses being particularly scrutinised. After the death of five schoolgirls in a fatal accident in County Meath in 2005 involving a DAF MB230/Van Hool (ex front line expressway) school bus. All school buses are fitted with seatbelts from 31 October 2011.[6]

Some non-fatal incidents have also been quite serious, for example, an off-duty bus plunging into the River Liffey in Dublin, after a collision with another vehicle.

The company has also posted notices to encourage orderly queuing at bus stops after a series of incidents where pedestrians on the foot path were struck on the head by the wing mirrors of city buses.

Bus Eireann introduced the first NGV on 17 July 2012 in Cork. It operated on the 216 Cork City centre to Mount Oval, Rochestown, route until mid-August 2012 on a trial that was undertaken in partnership with Ervia. The Eco-city bus is made by MAN.[7] 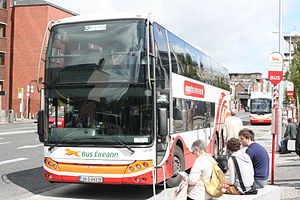 As at November 2013 the fleet consists of 1,300 buses and coaches.[8] The company mainly uses buses built by firms such as Scania, VDL Berkhof and Volvo. Bus Éireann's fleet have been substantially invested in as part of the National Development Plan. The vast majority of the operating fleet for expressway, commuter and local services are now five years old or less.[citation needed] 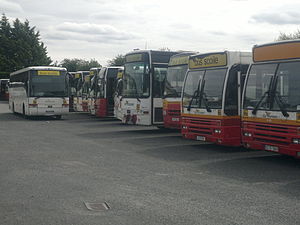 Bus Éireann operates the School Transport Scheme on behalf of the Department of Education and Science. County Meath VEC assist Bus Éireann in administrating the service in County Meath to all second-level schools.[9] Bus Éireann is responsible for planning routes, employing bus drivers, collecting fares and ensuring compliance with safety regulations and insurance.

The 'Schools' services were until recently operated by cascaded second-hand ex-frontline vehicles. Due to recent regulations regarding seatbelts, all dated and unsuited vehicles were withdrawn replaced with second-hand vehicles (mainly from UK). Since 2006 Bus Éireann has being purchasing brand new buses from BMC in Turkey. A roll out of BMC 1100FE started between 2006–2008.

A number of the routes are outsourced to local bus companies such as Dunshaughlin Coach Hire, Jerry Ryan, O'Rourkes and Bernard Kavanaghs.

Longford bus station have some ex-Dublin Bus school vehicles which are used on Bus Éireann services.