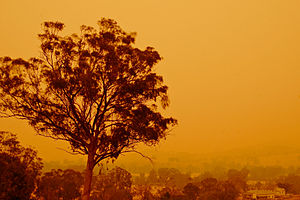 Looking towards the town Swifts Creek, Victoria, in December 2006 during the Victorian Alpine Fires 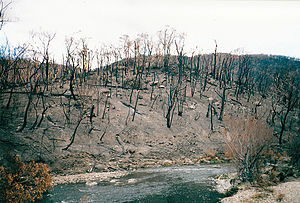 Intense bushfires can seriously impact the environment, such as here by the Big River, near Anglers Rest, East Gippsland, after the 2003 Victorian fires

Bushfires in Australia are frequent events during the warmer months of the year, due to Australia's mostly hot, dry climate. Each year, such fires impact extensive areas. On one hand, they can cause property damage and loss of human life. On the other hand, certain native flora in Australia have evolved to rely on bushfires as a means of reproduction, and fire events are an interwoven and an essential part of the ecology of the continent. For thousands of years, Indigenous Australians have used fire to foster grasslands for hunting and to clear tracks through dense vegetation.

Major firestorms that result in severe loss of life are often named based on the day on which they occur, such as Ash Wednesday and Black Saturday. Some of the most intense, extensive and deadly bushfires commonly occur during droughts and heat waves, such as the 2009 Southern Australia heat wave, which precipitated the conditions during the 2009 Black Saturday bushfires in which 173 people lost their lives. Other major conflagrations include the 1983 Ash Wednesday bushfires, the 2003 Eastern Victorian alpine bushfires and the 2006 December Bushfires.

Global warming is increasing the frequency and severity of bushfires.[1]

The term "bushfire" builds on the concept of "the bush", referring to sparsely-inhabited regions. Bushfires in Australia are generally defined as uncontrolled, non-structural fires burning in a grass, scrub, bush, or forested area. Australia, being a geographically and meteorogically diverse continent, experiences many types of bushfires. There are two main categories, depending on local topography.

File:Epicormic Shoots from an Epicormic Bud on Eucalyptus following Bushfire 2, near Anglers Rest, Vic, Aust, jjron 27.3.2005.jpg
Epicormic shoots sprouting vigorously from epicormic buds beneath the thick bushfire damaged bark of a Eucalyptus tree – one of the strategies evolved by plants to survive bushfires 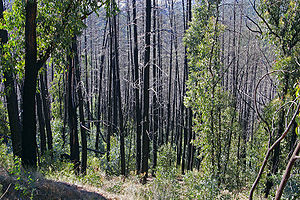 Bushfire damage to forests in East Gippsland, Victoria from the Bogong Fire Complex of 2003, two years after fires swept through the area, showing the recovery of trees and undercroft

The natural fire regime in Australia was altered by the arrival of humans. Fires became more frequent, and fire-loving species—notably eucalypts—greatly expanded their range.[2] It is assumed that a good deal of this change came about as the result of deliberate action by early humans, setting fires to clear undergrowth or drive game.[3]

Plants have evolved a variety of strategies to survive (or even require) bushfires, (possessing epicormic shoots or lignotubers that sprout after a fire, or developing fire-resistant or fire-triggered seeds) or even encourage fire (eucalypts contain flammable oils in the leaves) as a way to eliminate competition from less fire-tolerant species.[4]

Some native animals are also adept at surviving bushfires.[5]

In 2009, a standardised Fire Danger Rating (FDR) was adopted by all Australian states. During the fire season the Bureau of Meteorology (BOM) provides fire weather forecasts and by considering the predicted weather including temperature, relative humidity, wind speed and dryness of vegetation, fire agencies determine the appropriate Fire Danger Rating.[6] In 2010, following a national review of the bush fire danger ratings, new trigger points for each rating were introduced for grassland areas in most jurisdictions. See for example the following glossary[7]

Fire Danger Ratings are a feature of weather forecasts and alert the community to the actions they should take in preparation of the day. Ratings are broadcast via newspapers, radio, TV, and the internet.

The Rural Fire Service (RFS) is a volunteer-based firefighting agency and operates as part of the Queensland Fire and Emergency Services.[8]

The Country Fire Service is a volunteer based fire service in the state of South Australia. The CFS operates as a part of the South Australian Fire and Emergency Services Commission (SAFECOM). 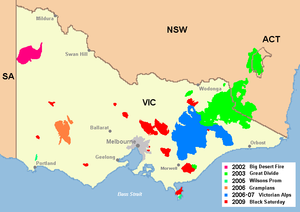 In Victoria, the Country Fire Authority (CFA) provides firefighting and other emergency services to country areas and regional townships within the state, as well as large portions of the outer suburban areas and growth corridors of Melbourne not covered by the Metropolitan Fire Brigade.[10]

Local authorities provide education and information for residents in bushfire-prone regions regarding the location of current fires,[12] preservation of life and property[13] and when to escape by car.[14]

Bushfires in Australia can occur all year-round, though the severity and the "bushfire season" varies by region.[15] These seasons are commonly grouped into years such as "2006-07 Australian bushfire season" and typically run from June one year until May the next year.

In southeast Australia, bushfires tend to be most common and most severe during summer and autumn (December–March), in drought years, and particularly severe in El Niño years. Southeast Australia is fire-prone, and warm and dry conditions intensify the probability of fire.[16] In northern Australia, bushfires usually occur during the dry season (April to September),[17] and fire severity tends to be more associated with seasonal weather patterns. In the southwest, similarly, bushfires occur in the summer dry season and severity is usually related to seasonal growth. Fire frequency in the north is difficult to assess, as the vast majority of fires are caused by human activity, however lightning strikes are as common a cause as human-ignited fires and arson.

Australia's climate has been trending toward more bushfire weather over the last 30 years.[18] The Climate Commission found that "The intensity and seasonality of large bushfires in south-east Australia appears to be changing, with climate change a possible contributing factor."[19]

A 2006 report by the Bushfire CRC acknowledges the complexity of climate predictions pointing out "Much of [Australia's] vegetation has a complex evolutionary and dependent relationship with fire. Fire has been part of these environments for tens of thousands of years and much native flora and fauna remains dependent on it in various ways."[20] In 2007, a study by the CSIRO (the national government body for scientific research in Australia), found evidence that climate change will lead to increases in very high and extreme fire danger rating days and earlier onset of the fire season.[21] Other studies investigating the historical record identify significant changes in Australia's bushfire season as a result of human activity.[22]

Bushfires have accounted for over 800 deaths in Australia since 1851 and the total accumulated cost is estimated at $1.6 billion.[23] In terms of monetary cost however, they rate behind the damage caused by drought, severe storms, hail, and cyclones,[24] perhaps because they most commonly occur outside highly populated urban areas.

Some of the most severe Australian bushfires, in chronological order, have included: