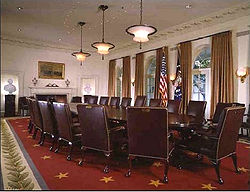 The Cabinet Room in 2007, during the administration of George W. Bush. 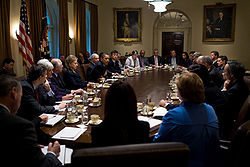 Though completed in 1934 the room is built in the Georgian style. The neoclassical ceiling molding with triglyphs was installed in 1934. A series of French doors topped with arched lunette windows are located on the east side of the room. A fireplace, flanked by two niches is located on the north side of the room. Busts of George Washington and Benjamin Franklin by Jean-Antoine Houdon fill the niches. Above the mantel hangs a painting titled "The Signing of the Declaration of Independence" by Charles Édouard Armand-Dumaresq, (French, 1826–1895). Additional portraits along the west wall are chosen by an incumbent president. The large elliptical mahogany table was a gift from President Richard Nixon in 1970. The president and the cabinet secretaries' chairs are copies of a late-eighteenth century design. The president's chair is centered on the table on the east side of the room. The back of the president's chair is two inches taller than those of the cabinet secretaries. Engraved brass plates with the names of the cabinet positions are attached to the back of the chairs. The president's simply says "THE PRESIDENT." The chairs are purchased by the cabinet members, who may keep the chair as a souvenir after they leave office. Some cabinet members have had their chairs returned to the cabinet room for several positions and administrations.

In 2006 the room was refurbished somewhat similarly to its appearance during the administration of Franklin Delano Roosevelt when the West Wing and current Cabinet Room were largely rebuilt following damages from a fire at the end of the Herbert Hoover administration. This includes Art Deco style wall sconces with spread eagles supporting internally lit globes. Three overhead Moderne style glass pendant lights were recreated from old photographs and a similar surviving example in a hallway between the Oval Office and Roosevelt Room. The room is painted an off-white color called deauville. A custom made carpet, in shades of carmine, old gold, sapphire and fern green with a pattern of overscaled stars and olive leaves was woven for the room.