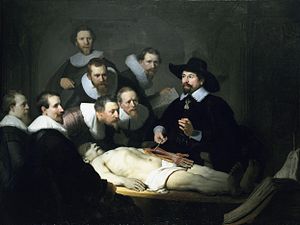 A cadaver, also called corpse (singular) in medical, literary, and legal usage, or when intended for dissection, is a deceased body.[1][2] 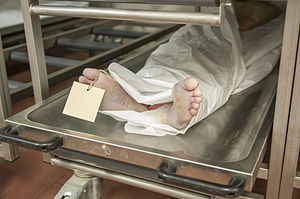 Refrigerator in the Forensic Medicine at the Charité Berlin

Observation of the various stages of decomposition can help determine how long a body has been dead.

The first stage is autolysis, more commonly known as self-digestion, during which the body's cells are destroyed through the action of their own digestive enzymes. However, these enzymes are released into the cells because of active processes ceasing in the cells, not as an active process. In other words, though autolysis resembles the active process of digestion of nutrients by live cells, the dead cells are not actively digesting themselves as is often claimed in popular literature and as the synonym self-digestion of autolysis seems to imply. As a result of autolysis, liquid is created that gets between the layers of skin and makes the skin peel off. During this stage, flies (when present) start to lay eggs in the openings of the body: eyes, nostrils, mouth, ears, open wounds, and other orifices. Hatched larvae, (maggots) of blowflies, subsequently get under the skin and start to eat the body.

The second stage of decomposition is bloating; bacteria in the gut begin to break down the tissues of the body, releasing gas that accumulates in the intestines, which becomes trapped because of the early collapse of the small intestine. This bloating occurs largely in the abdomen, and sometimes in the mouth and genitals. The tongue may swell. This usually happens in about the second week of decomposition. Gas accumulation and bloating will continue until the body is decomposed sufficiently for the gas to escape.

The third stage is putrefaction. It is the last and longest stage. Putrefaction is where the larger structures of the body break down, and tissues liquefy. The digestive organs, the brain, and lungs are the first to disintegrate. Under normal conditions, the organs are unidentifiable after three weeks. The muscles can be eaten by bacteria or devoured by animals. Eventually, sometimes after several years, all that remains is the skeleton. In acid-rich soils, the skeleton will eventually dissolve into its base chemicals.

Greek physician Herophilus (335-280 BC) [and Erasistratus (310-250 BC) performed public dissections], lived in 300 BC in Alexandria, Egypt. He was the first physician on record to have dissected bodies. The tradition of dissecting criminals was carried up into the eighteenth and nineteenth century when anatomy schools became popular in England and Scotland. At that time, a greater percentage of Christians believed in the literal raising from the dead. Because the souls of dissected bodies could not go to heaven, people rarely offered their bodies to science.[citation needed] Criminals who were executed for their crimes were used as the first cadavers. The demand for cadavers increased when the number of criminals being executed decreased. Since corpses were in such high demand, it became commonplace to steal bodies from graves in order to keep the market supplied.

The methods of preserving cadavers have changed over the last 200 years. At that time, cadavers had to be used immediately because there were no adequate methods to keep the body from quickly decaying. Preservation was needed in order to carry out classes and lessons about the human body. Glutaraldehyde was the first main chemical used for embalming and preserving the body although it leaves a yellow stain in the tissues, which can interfere with observation and research.

Formaldehyde is the chemical that is used as the main embalming chemical now. It is a colorless solution that maintains the tissue in its lifelike texture and can keep the body well preserved for an extended period.

Anatomy schools began to steal bodies from graves. While "grave robbers" were technically people who stole jewelry from the deceased, some respected anatomy instructors dug up bodies themselves. The anatomist Thomas Sewall, who later became the personal physician for three U.S. presidents, was convicted in 1818 of digging up a corpse for dissection.

Anatomists would even dissect members of their own family. William Harvey, the man famous for discovering the circulatory system, was so dedicated he dissected his father and sister. From 1827 to 1828 in Scotland, murders were carried out, so that the bodies could be sold to medical schools for cash. These were known as the West Port murders. The Anatomy Act of 1832 was formed and passed because of the murders. H. H. Holmes, a noted serial killer in Chicago, Illinois, USA, sold the skeletons of some of his victims to medical schools.

By 1828 anatomists were paying others to do the digging. At that time, London anatomy schools employed ten full-time body snatchers and about 200 part-time workers during the dissection season. This period ran from October to May, when the winter cold slowed down the decomposition of the bodies. A crew of six or seven could dig up about 310 bodies.[citation needed]

The poor were most vulnerable, because they could not afford coffins to keep the body snatchers out.

Disposing of the dissected body was difficult, and rumors have appeared about how anatomists might have managed. One possibility was secretly burying the remains behind their school. Another rumored possibility was that they gave the bodies to zoo keepers, as feed for carnivorous animals or burial beneath elephant grazing pens, or fed the bodies to vultures kept specifically for this purpose.

Stories appeared of people murdering for the money they could make off cadaver sales. Two of the most famous are that of Burke and Hare, and that of Bishop, May, and Williams. 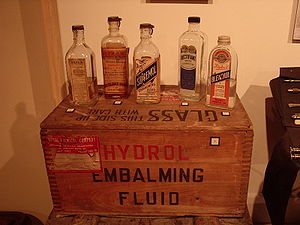 The embalming process includes the use of specialist chemicals.

When a corpse is buried, the body will decompose by the actions of anaerobic bacteria. In many countries, corpses buried in coffins are embalmed. An embalmer may prepare the corpse for a lifelike appearance. Embalming fluid is then pumped into the body via an artery (commonly carotid, or femoral). This rehydrates the tissues and severely reduces the pace of decomposition.