From Infogalactic: the planetary knowledge core
Jump to: navigation, search
For other uses, see Caddo (disambiguation).

The Caddo Nation is a confederacy of several Southeastern Native American tribes. Their ancestors traditionally inhabited much of what is now East Texas, northern Louisiana and portions of southern Arkansas and Oklahoma. Today the Caddo Nation of Oklahoma is a federally recognized tribe with its capital at Binger, Oklahoma. Descendants of the historic Caddo tribes can all be enrolled as members in the Caddo Nation, with documentation of at least 1/16 ancestry. The several Caddo languages have converged into a single language.

The Caddo Nation was previously known as the Caddo Tribe of Oklahoma. The tribal constitution provides for election of an eight-person council, with a chairperson, based in Binger, Oklahoma.[2] The tribal complex, dance grounds, and the Caddo Heritage Museum are located south of Binger. The tribe operates its own housing authority and issues its own tribal vehicle tags.[3] It maintains administrative centers, dance grounds, several community centers, and an active NAGPRA office. As of 2012, 5,757 people are enrolled in the nation, with 3,044 living within the state of Oklahoma.[3]

The tribe has several programs to invigorate Caddo traditions. The tribe sponsors a summer culture camp for children[4] The Hasinai Society[5] and Caddo Culture Club;[6] both keep Caddo songs and dances alive. The Kiwat Hasinay Foundation is dedicated to preserving and increasing use of the Caddoan language.[7] 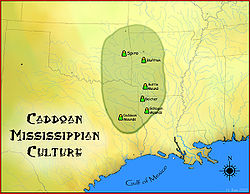 Map of the Caddoan Mississippian culture and some important sites

The Caddo are thought to be an extension of Woodland period peoples, the Fourche Maline culture and Mossy Grove cultures who were living in the area of Arkansas, Louisiana, Oklahoma, and Texas between 200 BCE to 800 CE.[8] The Wichita and Pawnee are related to the Caddo, as shown by their speaking Caddoan languages.

By 800 CE this society had begun to coalesce into the Caddoan Mississippian culture. Some villages began to gain prominence as ritual centers, where major earthworks were built to serve as places of temple mounds and elite residences. The mounds were arranged around leveled, open plazas, which were usually kept swept clean and were often used for ceremonial occasions. As complex religious and social ideas developed, some people and family lineages gained prominence over others.[8] By 1000 CE a society that is defined as "Caddoan" had emerged. By 1200 the many villages, hamlets, and farmsteads established throughout the Caddo world had developed extensive maize agriculture, producing a surplus and allowing greater density of settlement.[8] In these villages, artisans and craftsmen developed. The artistic skills and earthwork mound-building of the Caddoan Mississippians flourished during the 12th and 13th centuries.[9]

The Spiro mounds of present-day southeastern Oklahoma, near the Arkansas River, were some of the most elaborate mounds in the United States. They were made by such ancestors of the historic Caddo and Wichita tribes, in what is considered the westernmost point of the Mississippian culture.[10] The Caddo were farmers and enjoyed good growing conditions most of the time. But, the Piney Woods, the geographic area where they lived, was affected by the Great Drought, from 1276–1299 CE.[11]

Archeological evidence has confirmed that the cultural continuity is unbroken from prehistory to the present among these peoples. These Caddoan Mississippian people were the direct ancestors of the historic Caddo and related Caddo language speakers who encountered the first Europeans, as well as of the modern Caddo Nation of Oklahoma.[12] 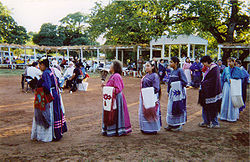 Caddo oral history of their creation story says the tribe emerged from an underground cave, called Chahkanina or "the place of crying," located at the confluence of the Red River of the South and Mississippi rivers in northern Louisiana. Their leader, named Moon, instructed the people not to look back. An old Caddo man carried with him a drum, a pipe, and fire, all of which continued to be important religious items to the people. His wife carried corn and pumpkin seeds. As people and accompanying animals emerged, the wolf looked back, and the exit closed to the remaining people and animals.[13]

The Caddo peoples moved west along the Red River, known as Bah'hatteno in Caddo.[14] A Caddo woman, Zacado, instructed the tribe in hunting, fishing, home construction, and clothing. Caddo religion focuses on Kadhi háyuh, translating to "Lord Above" or "Lord of the Sky." In early times, the people were led by priests, including a head priest, the xinesi, who could commune with spirits residing near Caddo temples.[13] A cycle of ceremonies corresponded to corn cultivation. Tobacco was and is used ceremonially. Early priests drank a purifying sacrament made of wild olive leaves.[15]

Centuries before extensive European contact, some of the Caddo territory was invaded by migrating Osage, Ponca, Omaha and Kaw, who had moved west beginning about 1200 CE due of years of warfare with the Iroquois in the Ohio River area of present-day Kentucky. The Osage particularly dominated the Caddo and pushed them out of some former territory, becoming dominant in the region of present-day Missouri, Arkansas, Kansas and Oklahoma. These tribes had become well settled in their new traditional grounds west of the Mississippi by mid-18th-century European contact.[14]

Most of the Caddo traditionally lived in the Piney Woods eco-region of the United States, which is now in areas known as East Texas, southern Arkansas, western Louisiana, and southeastern Oklahoma. The region extends up to the foothills of the Ozark Mountains and the people often settled near the Caddo River. The Piney Woods is a dense forest of deciduous and conifer flora covering rolling hills, steep river valleys, and intermittent wetlands called bayous. The Caddo tribes were associated in three confederacies when first encountered by the Europeans: the Natchitoches, Hasinai, and Kadohadacho, and were loosely affiliated with other neighboring tribes. The Natchitoches lived in now northern Louisiana, the Haisinai lived in East Texas, and the Kadohadacho lived near the border of Texas, Oklahoma, and Arkansas.[16]

The Caddo people had a diet based on cultivated staples, particularly maize. Sunflower seeds and pumpkins, as well as other types of squash, were also important staples. As such, these foods were endowed with cultural significance, as were wild turkeys. 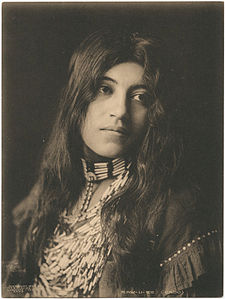 The Caddo first encountered Europeans in 1541 when the Hernando de Soto Expedition came through their lands.[17] De Soto's force had a violent clash with one band of Caddo Indians, the Tula, near Caddo Gap, Arkansas. This event is marked by a monument that stands in the small town today.

French explorers in the early 1700s encountered the Natchitoches in northern Louisiana. They were followed by traders, and later by missionaries from Spain and France, who also traveled among the people. The Europeans carried infectious diseases, such as smallpox and measles, because these were endemic in their societies. As the Caddoan peoples had no acquired immunity to such new diseases, they suffered epidemics with high fatalities that decimated the tribal populations. Influenza and malaria similarly devastated the Caddo.[14]

Several former Caddo villages were settled by European colonists after French traders had built forts for trading posts. Among such settlements are the present-day communities of Elysian Fields, and Nacogdoches, Texas, and Natchitoches, Louisiana. In the latter two towns, early explorers and settlers kept the original Caddoan names.

Having given way over years before the power of the former Ohio Valley tribes, the later Caddo negotiated for peace with waves of Spanish, French, and finally Anglo-American settlers. After the 1803 Louisiana Purchase, which gave it the former French colonial territory west of the Mississippi River, the United States government sought to ally with the Caddo peoples. During the War of 1812, American generals such as William Henry Harrison, William Clark (explorer), and Andrew Jackson had crushed pro-British Indian uprisings. Due to the Caddo's neutrality and their importance as a source of information for the Louisiana Territory government, they were left alone until the 1830s, when the federal government embarked on a program of Indian removal from areas desired for European-American settlement.[18]

In 1835 the Kadohadacho, the northernmost Caddo confederacy, signed a treaty with the US to relocate to Mexico (east Texas). Lightly settled by Mexican colonists, this area was being rapidly transformed by greatly increased immigration of European Americans. In 1836 they declared independence from Mexico and gained the Republic of Texas.[14] The name "Texas" is derived from the Hasinai word táysha, meaning "friend."[19]

In 1845 when Texas was admitted to the US as a state, the federal government forced the relocation of both the Hasinai and the Kadohadacho onto the Brazos Reservation. In 1859 many of the Caddo were relocated again to Indian Territory north of Texas, in present-day Oklahoma. After the Civil War, the Caddo were concentrated on a reservation located between the Washita and Canadian rivers in Indian Territory.[14]

In the late 19th century, the Caddo took up the Ghost Dance religion, which was widespread among American Indian nations in the West. John Wilson, a Caddo-Delaware medicine man who spoke only Caddo, was an influential leader in the Ghost Dance. In 1880, Wilson became a peyote roadman. The tribe had known the Half Moon peyote ceremony, but Wilson introduced the Big Moon ceremony to them.[20] The Caddo tribe remains very active in the Native American Church today. 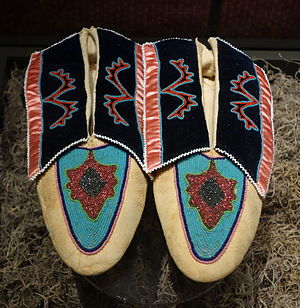 Moccasins made by Mrs. Sien-Coit Sturm (Caddo), 1909, collection of the Bata Shoe Museum, in Toronto, Ontario.[21]

Congress passed the Dawes Act to support assimilation of tribes in Indian Territory. It authorized distribution of tribal communal landholdings into allotments for individual households in order to have them establish subsistence family farms along the European-American model. Any tribal lands remaining after such allotments were to be declared "surplus" and sold to non-Native Americans. The allotment system was intended to extinguish tribal Native American land claims in order to enable admission of Oklahoma as a state and assimilate Native Americans into majority culture. The territory had been settled by numerous European Americans outside the tribal territories.

The Caddo vigorously opposed allotment. Whitebread, a Caddo leader, said, that "because of their peaceful lives and friendship to the white man, and through their ignorance were not consulted, and have been ignored and stuck away in a corner and allowed to exist by sufferance."[14] Tribal governments were dismantled at this time, and Native Americans were expected to act as state and US citizens. After some period, the adverse effects of these changes were recognized, as Caddo and other Native Americans suffered greatly from the disruption of the loss of their lands and breakup of their traditional cultures.

Under the federal Indian Reorganization Act of 1934 and the Oklahoma Indian Welfare Act of 1936, the Caddo restored their tribal government, while adopting a written constitution and a process of electing officials. They organized in 1938 as the Caddo Indian Tribe of Oklahoma. They ratified their constitution on 17 January 1938.[2] In 1976, they drafted a new constitution, which continues elected representative government. During the 20th century, Caddo leaders such as Melford Williams, Harry Guy, Hubert Halfmoon, and Vernon Hunter have shaped the tribe.[14]

In a special election on 29 June 2002, six amendments were made to the constitution. Tribal enrollment is open to individuals with a documented minimum of 1/16 degree Caddo blood quantum.[22]

Sometimes severe disagreements have developed among factions of the tribe that have not been resolved in elections. In August 2013, a group led by Philip Smith attempted to recall Brenda Shemayme Edwards, the Chairman of the Tribal Council. This faction conducted a new election but the victor stepped down, and Edwards refused to leave office. In October 2013 Smith and his supporters broke into the Caddo Nation headquarters. They chained the front doors from the inside and blocked off the entrance to the administration building. The opposition called the Bureau of Indian Affairs Police were called.[23]

Operation of the tribe was split between two factions. The Court of Indian Offenses, which had been overseeing issues for a year because of the internal conflict, in October 2014 ordered a new election for all positions.[24][25]