The Calendar (New Style) Act 1750 (c.23) (also known as Chesterfield's Act after Philip Stanhope, 4th Earl of Chesterfield) was an Act of the Parliament of Great Britain. It reformed the calendar of England and British Dominions so that the new legal year began on 1 January rather than 25 March (Lady Day); and it adopted the Gregorian calendar, as already used in most of western Europe.

The start of the year

By the middle of the 18th century, it was well-established practice in non-legal contexts to begin the year on 1 January. Scotland had already gone further and had adopted 1 January as the start of the year for legal purposes, while keeping the Julian calendar. In the Preamble to the Act, Parliament asserted that the beginning of the (English) legal year on 25 March was

Much of Western and Central Europe had by this time adopted the Gregorian calendar; Catholic countries (at the time including the Low Countries) did so in the late 16th century, and much of Protestant Northern Europe at the start of the 18th. The Julian calendar was acknowledged by Parliament to be slightly too long, and so to eventually cause months and days to fall in different seasons:

British lawmakers were persuaded that, because the Gregorian calendar had been widely adopted throughout Europe, adopting the same calendar in Britain would "be of general convenience to merchants, and other persons corresponding with other nations and countries, and tend to prevent mistakes and disputes in or concerning the dates of letters, and accounts."[1]

As well as adopting the Gregorian rule for leap years, Pope Gregory's rules for the date of Easter were also adopted. However, with religious strife still on their minds, the British could not bring themselves to adopt the Catholic system explicitly: the Annexe to the Act established a computation for the date of Easter that achieved the same result as Gregory's rules, without actually referring to him.[3] The algorithm, set out in the Book of Common Prayer as required by the Act, includes calculation of the Golden Number and the Sunday Letter, which (in the Easter section of the Book) were presumed to be already known. The Annexe to the Act includes the definition: "Easter-day (on which the rest depend) is always the first Sunday after the Full Moon, which happens upon, or next after the Twenty-first Day of March. And if the Full Moon happens upon a Sunday, Easter-day is the Sunday after." The Annexe subsequently uses the terms "Paschal Full Moon" and "Ecclesiastical Full Moon", making it clear that they only approximate to the real Full Moon.[4]

Scotland had already partly made the change: the year began on 1 January in 1600. As a result of the Act, Scotland adopted the Gregorian calendar in 1752.[5][6] 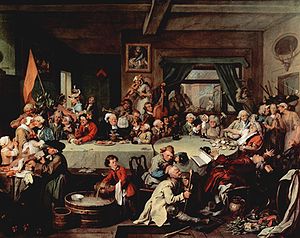 William Hogarth painting (c. 1755) which is the main source for "Give us our Eleven Days"

Some history books say that some people rioted after the calendar change, asking that their "eleven days" be returned. However this is very likely a myth, based on only two primary sources: The World, a satirical journal of Lord Chesterfield; and a painting by William Hogarth.[7]

Chesterfield was behind the Act. He wrote to his son, "Every numerous assembly is a mob, let the individuals who compose it be what they will. Mere sense is never to be talked to a mob; their passions, their sentiments, their senses and their seeming interests alone are to be applied to. Understanding have they collectively none." Here, he was boasting of his skill in having the Bill passed through the Lords; the 'mob' in question was his fellow peers.[citation needed]

When the son of the Earl of Macclesfield (who had been influential in passing the Act) stood for Parliament in Oxfordshire as a Whig in 1754, dissatisfaction with the calendar reform was one of a number of issues raised by his Tory opponents. In 1755, William Hogarth produced a painting (and an engraved print from the painting) loosely based on these elections, entitled An Election Entertainment, which shows a placard carrying the slogan "Give us our Eleven Days" (on floor at lower right). An example of the resulting incorrect history is by Ronald Paulson, author of Hogarth, His Life, Art and Times, who wrote that "...the Oxfordshire people...are specifically rioting, as historically the London crowd did, to preserve the 'Eleven Days' the government stole from them in September 1752 by changing the calendar."[7]

Thus the "calendar riot" fiction was born. The election campaign depicted concluded in 1754, after a very lengthy contest between Court Whigs and Jacobite Tories. Every issue between the two factions was brought up, including the question of calendar reform. The Tories attacked the Whigs for every deviation, including their alleged favouritism towards foreign Jews and the "Popish" calendar. Hogarth's placard, part of a satire on the character of the debate, was not an observation of actual crowd behaviour.[7]

There were, however, legitimate concerns about tax and other payments under the new calendar. Provision 6 (Times of Payment of Rents, Annuities) of the Act stipulated that monthly or yearly payments would not become due until the dates that they originally would have in the Julian calendar, or in the words of the Act "[Times of Payment of Rents, Annuities] at and upon the same respective natural days and times as the same should and ought to have been payable or made or would have happened in case this Act had not been made".[1]

Several theories have been proposed for the odd beginning of the British tax year on 6 April.[8] One is that from 1753 until 1799, the tax year began on 5 April, which corresponded to 25 March Old Style. After the twelfth skipped Julian leap day in 1800, it was changed to 6 April, which still corresponded to 25 March Old Style. However it was not changed when a thirteenth Julian leap day was skipped in 1900, so the tax year in the United Kingdom still begins on 6 April.[9][10] However Poole thought that quarter days, such as Lady Day on 25 March, marked the end of the quarters of the financial year.[7]:note 77 Thus, although 25 March Old Style marked the beginning of the civil year, the next day, 26 March Old Style was until 1752 the beginning of the tax year. After removing eleven days in 1752, this corresponded to 6 April New Style, where it remains today. Although Poole's theory is supported by one dictionary,[11] the Oxford English Dictionary and another dictionary as well as other sources state that quarter days mark the beginning of their respective quarters.[12][13][14][15]

In the Doctor Who Eighth Doctor Adventures series, it was revealed that the Eighth Doctor's enemies, Faction Paradox, a cult of time-travelling voodooists who worship paradox, have established a base in the eleven days that were missing from the calendar after the change-over, the Faction exploiting their manipulation of perception and contradiction to take the days that everyone believed were missing and make them 'real'.

The lost days feature in the plot of Robert Rankin's book The Brentford Chainstore Massacre, where a monk from the borough of Brentford made such a protest about the lost days after the change-over that the Church eventually decided to award Brentford two extra days a year if they were really wanted. The scrolls containing this proclamation were subsequently hidden for centuries until they were discovered by the protagonists of Jim Pooley and John Omally, the two men using the extra days that Brentford has accumulated over the years in order to celebrate the Millennium two years ahead of schedule, allowing the mysterious Professor Slocombe to perform a ritual that will bring about peace on Earth if the appropriate celebrations take place at that time.

The lost days are also the subject of conversation in Episode 19 of Thomas Pynchon's novel, Mason & Dixon.

In Emma Donoghue's book "Slammerkin" the calendar riots are referred to in the first pages, as how Cob Saunders is imprisoned.