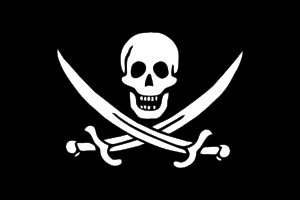 The Jolly Roger of Calico Jack.[5]

John "Jack" Rackham (Cuba, 26 December 1682 – Port Royal, 18 November 1720[1]), commonly known as Calico Jack, was an English pirate captain operating in the Bahamas and in Cuba during the early 18th century. (Rackham is often spelled as Rackam or Rackum in historical documentation, and he is also often referred to as Jack Rackham.) His nickname was derived from the calico clothing that he wore, while Jack is a nickname for "John."

Rackham was active towards the end (1718–20) of the "Golden Age of Piracy" which lasted 1650 to 1730. He is most remembered for two things: the design of his Jolly Roger flag, a skull with crossed swords, which contributed to the popularization of the design, and for having two female crew members: Mary Read and his lover Anne Bonny.

Rackham deposed Charles Vane from his position as captain of the sloop Ranger, then cruised the Leeward Islands, Jamaica Channel, and Windward Passage. He accepted a pardon some time in 1719 and moved to New Providence, where he met Anne Bonny, who was married to James Bonny at the time. He returned to piracy in 1720 by stealing a British sloop, and Anne joined him. Their new crew included Mary Read, who was disguised as a man at the time. After a short run, Rackham was captured by pirate hunter Jonathan Barnet in 1720, and was hanged in November of that year in Port Royal, Jamaica.

Little is known of Rackham's upbringing or early life, except for the fact that he was English and born around the year 1682. The first record of him is as quartermaster on Charles Vane's sloop Ranger in 1718, operating out of New Providence island in the Bahamas, which was a notorious base for pirates known as the 'Pirates' republic'.[6] Vane and his crew robbed several ships outside New York, then encountered a large French man-of-war. The ship was at least twice as large as Vane's sloop, and it immediately pursued them. Vane commanded a retreat from battle, claiming caution as his reason. Jack Rackham quickly spoke up and contested the decision, suggesting that they fight the man-o-war because it would have plenty of riches. In addition, he argued, if they captured the ship, it would place a much larger ship at their disposal. Of the approximately ninety men on the ship, only fifteen supported Vane in his decision. Vane declared that the captain's decision is considered final, however, despite the overwhelming support for Rackham's cry to fight, and they fled the man-o-war.

In October of 1718 Rackham joined Blackbeard for a party at Ocracoke Island, NC with a sizable cohort that includes Charles Vane.

On 24 November 1718, Rackham called a vote in which the men branded Vane a coward and removed him from the captaincy, making Calico Jack the next captain.[6] Rackham gave Vane and his fifteen supporters the other sloop in the fleet, along with a decent supply of ammunition and goods.[7]

Rackham made a career of plundering small vessels close to shore once he became captain. He and his crew captured the Kingston, a small Jamaican vessel, and made it their flagship. They made several conquests in the West Indies, taking a couple of large ships off of Bermuda.

In 1719, Rackham sailed into Nassau in the Bahamas, taking advantage of a general amnesty for pirates to obtain a royal pardon and commission from Governor Woodes Rogers. Rogers had been sent to the Bahamas to address the problem of pirates in the Caribbean who had started to attack and steal from British ships.

In December, he captured the merchant ship Kingston. The Kingston had a rich cargo, and promised to be a big score for Rackham and his crew. Unfortunately for him, the Kingston had been taken within sight of Port Royal, where outraged merchants outfitted bounty hunters to go after him. They caught up with him in February 1719, while his ship and the Kingston were anchored at Isla de los Pinos off of Cuba. Rackham and most of his men were on shore at the time, and they escaped capture by hiding in the woods - but their ship and rich trophy were taken away.

Captain Charles Johnson describes how Rackham stole a sloop in his 1722 classic A General History of the Robberies and Murders of the most notorious Pyrates. Rackham and his men were at a town in Cuba refitting their small sloop when a Spanish warship charged with patrolling the Cuban coast entered the harbour, along with a small English sloop which they had captured. The Spanish warship saw the pirates but could not get at them at low tide, so they anchored in the harbour entrance to wait for morning. That night, Rackham and his men rowed over to the captured English sloop and overpowered the Spanish guards there. As dawn broke, the warship began blasting Rackham's old ship, now empty, as Rackham and his men silently sailed past in their new prize.

Rackham and his men made their way back to Nassau, where they appeared before Governor Rogers and asked for the royal pardon, claiming that Vane had forced them to become pirates. Rogers hated Vane and chose to believe them, granting them the pardon and allowing them to stay. Their time as honest men, however, did not last long.

While in port, Rackham began an affair with Anne Bonny, wife of sailor James Bonny, who was employed by Governor Rogers. James Bonny learned about the relationship and brought Anne to Governor Rogers, who ordered her whipped on charges of adultery. Rackham offered to buy Anne in a "divorce by purchase," but she refused to be sold like an animal.[8] The pair (with a new crew) escaped to sea together, voiding Rackham's pardon, by stealing a sloop belonging to John Ham. They sailed the Caribbean for two months, taking over other pirate ships. Rackham would often invite the crew of ships that he attacked to join his own. Anne became pregnant and went to Cuba to have the child.

In September 1720, the Bahamas' Governor Woodes Rogers had issued a proclamation declaring Rackham and his crew as pirates—although it was not published until October 1720. After publication of the warrant, pirate hunter Jonathan Barnet started in pursuit of Rackham, who was cruising near Jamaica capturing numerous small fishing vessels and terrorizing fishermen along the northern Jamaican coastline.[9]

Rackham had come across a small vessel crewed by nine English pirates, and they joined Rackham on his ship for a bout of drinking while at anchor (and intoxicated) at Bry Harbour Bay in Jamaica, October 1720. Barnet's sloop attacked Rackham's ship and captured it after a fight presumably led by Mary Read and Anne Bonny. Rackham and his crew were brought to Spanish Town, Jamaica, in November 1720, where they were tried and convicted of piracy and sentenced to be hanged.

Rackham was executed in Port Royal on 18 November 1720, his body then gibbeted on display on a very small islet at a main entrance to Port Royal now known as Rackham's Cay.[6][7]

Fate of his crew

Anne Bonny and Mary Read both claimed to be pregnant at their trials, ten days after Rackham's execution, and so were given a temporary stay until the claim was proven. Read died in April 1721, most likely of fever related to childbirth. There is no historical record of Bonny's release or of her execution.[10]

The day after Rackham's trial, former crew members John "Old Dad the Cooper" or "Fenis" Fenwick and Thomas Bourn (alias Brown) were separately tried and convicted for mutinies committed in mid-June 1720 off Hispaniola.[1]

Nine men who had been caught drinking with Rackham's crew (John Eaton, Edward Warner, Thomas Baker, Thomas Quick, John Cole, Benjamin Palmer, Walter Rouse, John Hanson, and John Howard) were tried and convicted on 24 January 1721. On 17 February John Eaton, Thomas Quick and Thomas Baker were executed at Gallows Point, at Port Royal, and the next day John Cole, John Howard and Benjamin Palmer, were executed at Kingston. The fate of the remaining three is unknown.[1]