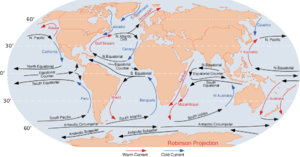 The ocean currents.
File:Corriente de California-Feb-13-2013-20.jpg
The lack of clouds along the coast (and also along the Central Valley of California) is due to an offshore wind blowing drier air from the land offshore.

The California Current is a Pacific Ocean current that moves southward along the western coast of North America, beginning off southern British Columbia and ending off southern Baja California. It is one of five major coastal currents affiliated with upwelling zones, the others being the Humboldt Current, the Canary Current, the Benguela Current, and the Somali Current.

The California Current is an Eastern boundary current and is also part of the North Pacific Gyre, a large swirling current that occupies the northern basin of the Pacific. The movement of northern waters southward makes the coastal waters cooler than the coastal areas of comparable latitude on the east coast of the United States. Additionally, extensive upwelling of colder sub-surface waters occurs, caused by the prevailing northwesterly winds acting through the Ekman Effect. The winds drive surface water to the right of the wind flow, that is offshore, which draws water up from below to replace it. The upwelling further cools the already cool California Current. This is the mechanism that produces California's characteristic coastal fog and the negative temperature anomaly we measure in California's coastal waters during summer (Mann and Lazier, 2006). This translates into cold coastal waters during the summer, stretching from Oregon to Baja California. Note, this does not include the coastal water surrounding San Diego. There is a warm water anomaly off San Diego (Mann and Lazier, 2006).

The cold water is highly productive due to the upwelling, which brings to the surface nutrient-rich sediments, supporting large populations of whales, seabirds and important fisheries. Winds of the appropriate direction and strength to induce upwelling are more prevalent in the presence of Eastern boundary currents, such as the California Current (Mann and Lazier, 2006). Phytoplankton production is dramatically increased in these areas because the nutrient-rich water lying below the pycnocline is relatively close to the surface and is thus easily upwelled (Mann and Lazier, 2006). Scientists at Scripps Institution of Oceanography said in 2011 that the average surface temperature of the water at Scripps Pier has increased by almost 3 degrees since 1950.[1]

A narrower, weaker counter current, the Davidson Current, occasionally moves somewhat warmer water northwards during the winter months. During El Niño events, the California Current is disrupted, leading to declines in phytoplankton, resulting in cascading effects up the food chain, such as declines in fisheries, seabird breeding failures and marine mammal mortality (Schwing et al., 2003). In 2005, a failure in the otherwise predictable upwelling events, unassociated with El Niño, caused a collapse in krill in the current, leading to similar effects (Schwing et al., 2003).

Bakun (1973) calculated a 20-year average of the monthly mean Ekman transport for different regions off the California coast. His 'Bakun upwelling index' ranges from 300 meters-cubed/second (in the offshore direction) to -212 meters-cubed/second (toward the coast, or onshore direction) (Mann and Lazier,2006). Bakun's index showed there is year-round upwelling off Southern California's coast, but it is strongest in the summer months. Bakun's work also shows that off the coast of Oregon and Washington, there is forceful downwelling in the winter months, and upwelling in the region is restricted to the months of April through September (Mann and Lazier, 2006).

The Southern California Bight is a sub-region of the California Current and has unique physical properties. Upwelling is fairly weak in the California Bight and Smith and Eppley (1982) stated that the 16-year average for primary production was 0.402 grams Carbon/(meter-squared x day),or approximately 150 grams carbon/(meter-squared x year). Further, Smith and Eppley (1982) found that the highest daily rates of temperature decrease were correlated with the maximum amount of upwelling (Mann and Lazier, 2006). Digiacomo and Holt (2001) used satellite images to study the mesoscale and sub-mesoscale eddies in the Southern California Bight. Their work showed that all eddies were less than 50 km in diameter and 70% of all eddies measured less than 10 km (Mann and Lazier, 2006). The eddies appeared to be caused mostly by topography (particularly islands), wind, and instabilities in the current. The location of these eddies was mainly between the California Current (flowing toward the equator) and the coastline (Mann and Lazier, 2006). The majority of these eddies were cyclonic and had the ability to induce the upwelling of nutrient-rich water. Small scale topographic features such as headlands have been shown to cause substantial effects on the population dynamics of benthic invertebrates, such a change in the settlement patterns of crabs and sea urchin (Mann and Lazier, 2006).