The Caliphate of Córdoba (Arabic: خلافة قرطبة‎‎; trans. Khilāfat Qurṭuba) was a state in Islamic Iberia ruled by the Umayyad dynasty along with a part of North Africa. The state, with the capital in Córdoba, existed from 929 to 1031. The region was formerly dominated by the Umayyad Emirate of Córdoba (756–929). The period was characterized by an expansion of trade and culture, and saw the construction of masterpieces of al-Andalus architecture. In January 929, Abd-ar-Rahman III proclaimed himself caliph (Arabic: خليفة) of Córdoba[2] in place of his original title, Emir of Córdoba (Arabic: أمير قرطبة 'Amīr Qurṭuba). Abd-ar-Rahman III was a member of the Umayyad dynasty, which had held the title of Emir of Córdoba since 756.

The caliphate disintegrated during a civil war (the Fitna of al-Andalus) between the descendants of the last caliph, Hisham II, and the successors of his hayib, Al-Mansur. In 1031, after years of infighting, the caliphate fractured into a number of independent Muslim taifa (kingdoms).[3]

Abd-ar-Rahman I became Emir of Córdoba in 756 after six years in exile after the Umayyads lost the position of Caliph in Damascus to the Abbasids in 750. Intent on regaining power, he defeated the existing Islamic rulers of the area and united various local fiefdoms into an emirate.[4] Raids then increased the emirate's size; the first to go as far as Corsica occurred in 806.

The emirate's rulers used the title "emir" or "sultan" until the 10th century, when Abd-ar-Rahman III faced a threatened invasion by the Fatimids (a rival Islamic empire based in Cairo). Since the invading Fatimids claimed the caliphate in opposition to the generally recognized Abbasid Caliph of Baghdad, Abd-ar-Rahman III claimed the title of caliph himself.[5] Even after repulsing the Fatimids, Abd-ar-Rahman III kept the more prestigious title.[6] Although his position as caliph was not accepted outside of al-Andalus and its North African affiliates, internally the Spanish Umayyads considered themselves as closer to Muhammad, and thus more legitimate, than the Abbasids.

The caliphate enjoyed increased prosperity during the 10th century. Abd-ar-Rahman III united al-Andalus and brought the Christian kingdoms of the north under control by force and through diplomacy. Abd-ar-Rahman stopped the Fatimid advance into caliphate land in Morocco and al-Andalus. This period of prosperity was marked by increasing diplomatic relations with Berber tribes in North Africa, Christian kings from the north and with France, Germany and Constantinople.[7] The death of Abd-ar-Rahman III led to the rise of his 46-year-old son, Al-Hakam II, in 961. Al-Hakam II continued his father's policy, dealing humanely with disruptive Christian kings and North African rebels. Al-Hakam's reliance on his advisers was greater than his father's.[8]

The death of al-Hakam II in 976 marked the beginning of the end of the caliphate. Before his death, al-Hakam named his 10-year-old son Hisham II (976–1008) successor. Although the child was ill-equipped to be caliph, since he had sworn an oath of obedience to him Al-Mansur Ibn Abi Aamir (top adviser to al-Hakam, also known as Almanzor) pronounced him caliph. Ibn Abi Aamir was guardian to the boy, exercising Hisham's powers until he matured. He isolated Hisham in Córdoba while systematically eradicating opposition to his own rule,[9] allowing Berbers from Africa to migrate to al-Andalus to increase his base of support. He, his son Abd al-Malik (al-Muzaffar, after his 1008 death) and his brother (Abd al-Rahman) retained the power nominally held by Caliph Hisham. However, during a raid on the Christian north a revolt tore through Córdoba and Abd al-Rahman never returned.[10][11]

The decision to name Hisham II caliph shifted power from an individual to his advisers. The title of caliph became symbolic, without power or influence. The Caliphate would be rocked with violence, with rivals claiming to be the new caliph. The last Córdoban Caliph was Hisham III (1027–1031). Beset by factionalism, the caliphate crumbled in 1031 into a number of independent taifas. 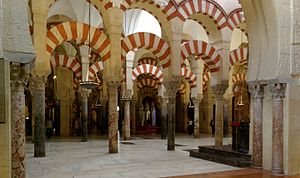 Interior of the Mezquita (Mosque), one of the finest examples of Umayyad architecture in Spain.

Córdoba was the cultural centre of al-Andalus.[12] Mosques, such as the Great Mosque, were the focus of many caliphs' attention. The caliph's palace, Medina Azahara is on the outskirts of the city, and had many rooms filled with riches from the East. Córdoba was the intellectual centre of al-Andalus, with translations of ancient Greek texts into Arabic, Latin and Hebrew. The library of Al-Ḥakam II was one of the largest libraries in the world, housing at least 400,000 volumes. During the Caliphate period, relations between Jews and Arabs were cordial; Jewish stonemasons helped build the columns of the Great Mosque.

Advances in science, history, geography, philosophy and language occurred during the Caliphate.[13] Al-Andalus was subject to eastern cultural influences as well. The musician Ziryab is credited with bringing hair and clothing styles, toothpaste, and deodorant from Baghdad to the Iberian peninsula.[citation needed]

The economy of the caliphate was diverse and successful, with trade predominating. Muslim trade routes connected al-Andalus with the outside world via the Mediterranean. Industries revitalized during the caliphate included textiles, ceramics, glassware, metalwork, and agriculture. The Arabs introduced crops such as rice, watermelon, banana, eggplant and hard wheat. Fields were irrigated with water wheels. 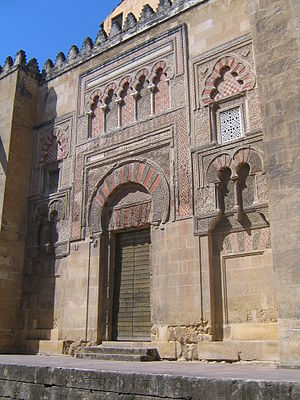 Exterior of the Mezquita

The caliphate had an ethnically, culturally and religiously diverse society. A minority of ethnic Muslims of Arab descent occupied the priestly and ruling positions, another Muslim minority were primarily soldiers and native Hispano-Gothic converts (who comprised most of the Muslim minority) were found throughout society (although they were considered inferior to the Arabs and Berbers). Jews comprised about ten percent of the population: little more numerous than the Arabs, and about equal in numbers to the Berbers. They were primarily involved in business and intellectual occupations. The indigenous Christian Mozarab majority were Catholic Christians of the Visigothic rite, who spoke a variant of Latin close to Spanish, Portuguese or Catalan with an Arabic influence. The Mozarabs comprised the lower strata of society, heavily taxed with few civil rights, and were culturally influenced by the Muslims.

Ethnic Arabs occupied the top of the social hierarchy; Muslims had a higher social standing than Jews, who had a higher social standing than Christians. Christians and Jews were considered dhimmis, required to pay jizya (a tax for the wars against Christian kingdoms in the north).[14] The word of a Muslim was valued more than that of a Christian or Jew in court, and some offenses were harshly punished when a Jew or Christian was the perpetrator against a Muslim; the same offenses were permitted when the perpetrator was a Muslim and the victim a non-Muslim. Half of the population in Córdoba is reported to have been Muslim by the 10th century, with an increase to 70 percent by the 11th century. This was due less to local conversion than to Muslim immigration from the rest of the Iberian Peninsula and North Africa. This, combined with the mass expulsions of Christians from Córdoba after a revolt in the city, explains why, during the caliphate, Cordoba was the greatest Muslim centre in the region. Jewish immigration to Córdoba also increased at this time.

According to historians, the emirs and caliphs comprising the Umayyad dynasty in Al-Andalus were the sons of concubine slaves (almost all Iberians from the north of the peninsula). The founder of the dynasty, Abd-ar-Rahman I, was the son of a Berber woman; his son (and successor as emir) had a Spanish mother.[15] A genetic study concluded that the genome of Hisâm II, tenth ruler of the Umayyad dynasty, "would have mostly originated from the Iberian Peninsula and would not be more than 0.1% of Arab descent, although the Y chromosome would still be of fully Arab origin".[16][17]