The pound (symbol £ or C£) was the unit of account for currency of the Canadas until 1858. It was subdivided into 20 shillings (s), each of 12 pence (d). In Lower Canada, the sou was used, worth ​1⁄2 penny. Although the pounds, shillings, and pence accounting system had its origins in the British pound sterling, the Canadian pound was never linked to British currency.

In North America, the scarcity of British coins led to the widespread use of Spanish dollars. These Spanish dollars were accommodated into a pounds, shillings, and pence (£sd) accounts system, by setting a valuation for these coins in terms of a pound unit. At one stage, two such units were in widespread use in the British North American colonies. The Halifax rating dominated, and it set the Spanish dollar equal to 5 shillings. As this was 6 pence more than its value in silver, the Halifax pound was consequently lower in value than the pound sterling which was actually the original basis for the pounds, shillings, and pence accounting system. The York rating of 1 Spanish dollar = 8 shillings was used in Upper Canada, officially until its outlawing in 1796, but unofficially well into the 19th century.

In 1825, an Imperial order-in-council was introduced for the purposes of causing sterling-specie coinage to circulate in the colonies. The idea was that this order-in-council would make the sterling coins legal tender at the exchange rate of 4s 4d per Spanish dollar. This rate was in fact unrealistic and it had the adverse effect of actually driving out what little sterling-specie coinage was already circulating. Remedial legislation was introduced in 1838 but it was not applied to the British North American colonies due to recent minor rebellions in Upper and Lower Canada. 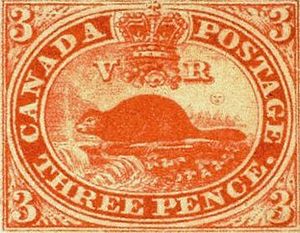 An 1851 Canadian postage 3d-denominated postage stamp in pounds, shillings, and pence units of the Halifax rating

The 1850s was a decade of wrangling over whether to adopt a sterling monetary system or a decimal monetary system based on the US dollar. The local population, for reasons of practicality in relation to the increasing trade with the neighbouring United States, had an overwhelming desire to assimilate the Canadian currency with the American unit, but the imperial authorities in London still preferred the idea of sterling to be the sole currency throughout the British Empire. In 1851, the Canadian parliament passed an act for the purposes of introducing a sterling unit in conjunction with decimal fractional coinage. The idea was that the decimal coins would correspond to exact amounts in relation to the US dollar fractional coinage. The authorities in London refused to give consent to the act on technical grounds. This was the last time that the imperial authorities in London ever questioned Canada's internal jurisdiction.

As a compromise, in 1853 an act of the Canadian parliament introduced the gold standard into Canada, based on both the British gold sovereign and the American gold eagle coins. This gold standard was introduced with the gold sovereign being legal tender at £1 = US$​4.86 2⁄3. No coinage was provided for under the 1853 act. Sterling coinage was made legal tender and all other silver coins were demonetized. Dollar transactions were legalized. The British government in principle allowed for a decimal coinage but nevertheless held out the hope that a sterling unit would be chosen under the name of royal. However in 1857 the decision was made to introduce a decimal coinage into Canada in conjunction with the US dollar unit. Hence, when the new decimal coins were introduced in 1858, Canada's currency became aligned with the US currency, although the British gold sovereign continued to remain legal tender at the rate of £1 = ​4.86 2⁄3 right up until the 1890s.[citation needed] In 1859, Canadian postage stamps were issued with decimal denominations for the first time.

In the year 1861, New Brunswick and Nova Scotia followed Canada in adopting a decimal system based on the US dollar. In the following year, Canadian postage stamps were issued with the denominations shown in dollars and cents.

In 1865, Newfoundland introduced the gold standard in conjunction with decimal coinage, but unlike in the cases of the Province of Canada, New Brunswick, and Nova Scotia, it decided to adopt a unit based on the Spanish dollar rather than on the US dollar, and there was a slight difference between these two units. The US dollar was created in 1792 on the basis of the average weight of a selection of worn Spanish dollars. As such, the Spanish dollar was at a slight discount to the US dollar, and likewise, the Newfoundland dollar, while it existed, was at a slight discount to the Canadian dollar. Newfoundland was the only part of the British Empire to introduce its own gold standard coin. A Newfoundland gold two dollar coin was minted intermittently until Newfoundland finally adopted the Canadian monetary system in 1894, following the Newfoundland banking crash.

In 1867, Canada, New Brunswick, and Nova Scotia united in a federation called the Dominion of Canada and the three currencies were united.

One Penny (2 Sous) bank token issued by City Bank in Lower Canada in 1837.

Both Upper Canada (Canada West, modern southern Ontario) and Lower Canada (Canada East, modern southern Quebec) issued copper tokens. Between 1835 and 1852, the Bank of Montreal, the Banque du Peuple, the City Bank and the Quebec Bank issued 1- and 2-sou (​1⁄2- and 1-penny) tokens for use in Lower Canada. The Bank of Upper Canada issued ​1⁄2- and 1-penny tokens between 1850 and 1857.