The company was originally named Seikikōgaku kenkyūsho (jpn. 精機光学研究所, Precision Optical Industry Co. Ltd.). In 1934 it produced the Kwanon, a prototype for Japan’s first-ever 35 mm camera with a focal plane based shutter.[5] In 1947 the company name was changed to Canon Camera Co., Inc.,[5] shortened to Canon Inc. in 1969. The name Canon comes from Buddhist bodhisattva Guan Yin (観音, Kannon in Japanese), previously transliterated as Kuanyin, Kwannon, or Kwanon in English.

The origins of Canon date back to the founding of Precision Optical Instruments Laboratory in Japan in 1937 by Takeshi Mitarai, Goro Yoshida, Saburo Uchida and Takeo Maeda. During its early years the company did not have any facilities to produce its own optical glass, and its first cameras incorporated Nikkor lenses from Nippon Kogaku K.K. (the later Nikon Corporation).[6]

Between 1933 and 1936 ‘The Kwanon’, a copy of the Leica design, Japan’s first 35 mm focal plane-shutter camera, was developed in prototype form.[7] In 1940 Canon developed Japan's first indirect X-ray camera. Canon introduced a field zoom lens for television broadcasting in 1958 and in 1959 introduced the Reflex Zoom 8, the world’s first movie camera with a zoom lens, and the Canonflex.

In 1961 Canon introduced the Rangefinder camera, Canon 7, and 50mm 1:0.95 lens in a special bayonet mount. In 1964 Canon introduced the 'Canola 130', the first Japanese made 10-key calculator, a substantial improvement on the design of the British Bell Punch company, which introduced the first fully electronic calculator two years earlier with the Sumlock Anita Mark 8 unit. In 1965 Canon introduced the Canon Pellix, a single lens reflex (SLR) camera with a semi-transparent stationary mirror which enabled the taking of pictures through the mirror.

In 1971 Canon introduced the F-1, a high-end SLR camera, and the FD lens range. In 1976 Canon launched the AE-1, the world’s first camera with an embedded micro-computer.[citation needed]

In 1992 Canon launched the EOS 5, the first-ever camera with eye-controlled AF, and the PowerShot 600, its first digital camera.[9] In 1995 Canon introduced the first commercially available SLR lens with internal image stabilization, EF 75-300mm f/4-5.6 IS USM. EOS-1N RS, the world's fastest AF SLR camera with a continuous shooting speed of 10 frame/s at the time. Based on the EOS-1N, the EOS-1N RS has a fixed, semi-transparent pellicle mirror with a hard coat. In 1996 Canon introduced a pocket-sized digital camera with the Advanced Photo System, named ELPH in America and IXUS in Europe. Canon entered the digital video camcorder market in 1997.

On 16 March 2010, Canon announced that it was seeking to acquire a new .canon generic top-level domain.[14] In the third quarter of 2012, Canon's global market share in the sale of printers, copiers and multifunction devices amounted to 20.90 percent.[15]

In February 2014, Canon announced it would acquire Texas-based Molecular Imprints Inc, a developer of nanoprint lithography systems, for an amount speculated to be around $98 million.[18]

In November 2015, Canon USA filed lawsuits against a number of camera gear retailers in an attempt to stop the sale of gray market camera gear. Retailers include Get It Digital, All New Shop and F&E Trading.[21]

DeVito/Verdi was hired for an award winning, humorous campaign with the concept “If business were that easy, you wouldn't need us,” using old office footage to describe the new ways Canon Business Solutions was bringing copiers and office supplies forward.

Canon introduced Thermal Transition Copying as a part of the manufacturing process for all of its cameras. This process allows a camera's polymer casing to very slightly change temperature through an exothermic reaction triggered by electronic sensors, to assist in the prevention of condensation inside the camera; a common problem experienced when using an SLR camera in certain conditions.[citation needed]

Canon manufactures a wide range of flatbed scanners, film scanners, and document scanners for home and business use, including the Canon Canoscan 8800F.

Canon introduced two MSX home computer models in 1983, the V-10 and the V-20. Both offered just the minimum range of the MSX standards without any additional features. The V-20 was able to receive shooting data from the T90 Canon camera with the Data Memory Back T90 expansion.

Canon is developing a prototype virtual reality headset (Canon VR). The headset offers a wider viewing angle (120 degrees) than other VR devices but requires handles rather than a head strap. The headset is not yet available on the market.[23]

On 26 December 2003, Canon Inc. announced restructuring plans for three domestic Canon Group companies. The restructuring involved the merger of two companies and the spinning off of 1.[25]

A report by the environmental organization Clean Air-Cool Planet puts Canon at the top of a list of 56 companies the survey conducted on climate-friendly companies.[26] 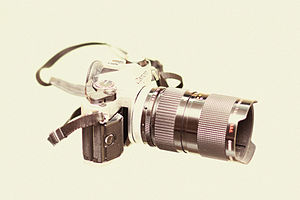 The company has a corporate social responsibility strategy in Europe named ‘Green is just a shade of blue’. The strategy places emphasis on green issues being ‘a small part of the bigger, bluer picture’, and therefore gives equal importance to other areas, including ethics, attitudes, humanitarian aid and disaster relief, education, science and social welfare.

The Canon Group has an environmental charter which looks at ‘offering products with a lower environmental burden through improvements in resource efficiency, while eliminating anti-social activities that threaten the health and safety of mankind and the environment.’[28]

In 2008 Canon donated financial support to help the estimated 5 million people displaced by the earthquake that hit China’s Sichuan province in May 2008.[29]

1 million RMB was donated to the Red Cross Society of China shortly after the earthquake. Canon Inc, Japan, soon followed with a donation of 10 million RMB.[29]

In 1983 came the first title sponsors of the English football league The Football League, which was named The Canon League from 1983 to 1986, when the sponsorship was taken over by the Today newspaper. From 1967-2003 Canon sponsored the Greater Hartford Open [Now Travelers Championship].

Since 2006 Canon has been helping the Red Cross provide support to thirteen Red Cross National Societies across Europe, with focus on youth projects. Support from Canon includes financial contributions and donations of imaging equipment; including cameras, copying machines and digital radiography devices, as well as volunteer activities.[30]