From Infogalactic: the planetary knowledge core
(Redirected from Capillary waves)
Jump to: navigation, search
This article is about ripples on fluid interfaces. For ripples in electricity, see ripple (electrical). For other uses, see ripple (disambiguation). 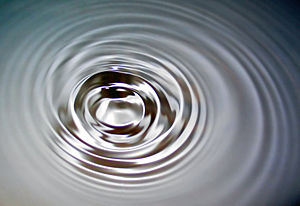 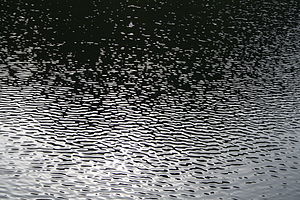 Ripples on Lifjord in Øksnes, Norway 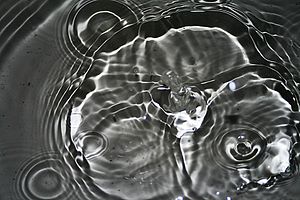 Capillary waves produced by droplet impacts on the interface between water and air. In this photograph the origin of the popular term "cat's paw" is evident

A capillary wave is a wave traveling along the phase boundary of a fluid, whose dynamics are dominated by the effects of surface tension.

Capillary waves are common in nature, and are often referred to as ripples. The wavelength of capillary waves in water is typically less than a few centimeters, with a speed of 10-20 centimeters/second.[citation needed]

When generated by light wind in open water, a nautical name for them is "cat's paw" waves, since they may resemble paw prints. Light breezes which stir up such small ripples are also sometimes referred to as cat's paws. On the open ocean, much larger ocean surface waves (seas and swells) may result from coalescence of smaller wind-caused ripple-waves.

A gravity–capillary wave on a fluid interface is influenced by both the effects of surface tension and gravity, as well as by fluid inertia.

The dispersion relation for capillary waves is

For the boundary between fluid and vacuum (free surface), the dispersion relation reduces to 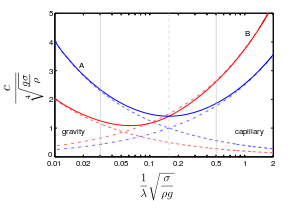 Dispersion of gravity–capillary waves on the surface of deep water (zero mass density of upper layer, ρ′ = 0). Phase and group velocity divided by

In general, waves are also affected by gravity and are then called gravity–capillary waves. Their dispersion relation reads, for waves on the interface between two fluids of infinite depth:[1][2]

where g is the acceleration due to gravity, ρ and ρ‘ are the mass density of the two fluids (ρ > ρ‘). Notice the factor

in the first term is the Atwood number.

For large wavelengths (small k = 2π/λ), only the first term is relevant and one has gravity waves. In this limit, the waves have a group velocity half the phase velocity: following a single wave's crest in a group one can see the wave appearing at the back of the group, growing and finally disappearing at the front of the group.

Shorter (large k) waves (e.g. 2 mm), which are proper capillary waves, do the opposite: an individual wave appears at the front of the group, grows when moving towards the group center and finally disappears at the back of the group. Phase velocity is two thirds of group velocity in this limit.

Between these two limits, an interesting and common situation occurs when the dispersion caused by gravity cancels out the dispersion due to the capillary effect. At a certain wavelength, the group velocity equals the phase velocity, and there is no dispersion. At precisely this same wavelength, the phase velocity of gravity–capillary waves as a function of wavelength (or wave number) has a minimum. Waves with wavelengths much smaller than this critical wavelength λc are dominated by surface tension, and much above by gravity. The value of this wavelength is:[1]

If one drops a small stone or droplet into liquid, the waves then propagate outside an expanding circle of fluid at rest; this circle is a caustics which corresponds to the minimal group velocity.[3]

As Richard Feynman put it, "[water waves] that are easily seen by everyone and which are usually used as an example of waves in elementary courses [...] are the worst possible example [...]; they have all the complications that waves can have."[4] The derivation of the general dispersion relation is therefore quite involved.[5]

Therefore, first the assumptions involved are pointed out. There are three contributions to the energy, due to gravity, to surface tension, and to hydrodynamics. The first two are potential energies, and responsible for the two terms inside the parenthesis, as is clear from the appearance of g and σ. For gravity, an assumption is made of the density of the fluids being constant (i.e., incompressibility), and likewise g (waves are not high for gravitation to change appreciably). For surface tension, the deviations from planarity (as measured by derivatives of the surface) are supposed to be small. Both approximations are excellent for common waves.

The last contribution involves the kinetic energies of the fluids, and is the most involved. One must use a hydrodynamic framework to tackle this problem. Incompressibility is again involved (which is satisfied if the speed of the waves is much less than the speed of sound in the media), together with the flow being irrotational – the flow is then potential; again, these are typically good approximations for common situations. The resulting equation for the potential (which is Laplace equation) can be solved with the proper boundary conditions. On one hand, the velocity must vanish well below the surface (in the "deep water" case, which is the one we consider, otherwise a more involved result is obtained, see Ocean surface waves.) On the other, its vertical component must match the motion of the surface. This contribution ends up being responsible for the extra k outside the parenthesis, which causes all regimes to be dispersive, both at low values of k, and high ones (except around the one value at which the two dispersions cancel out.)