Carbon County is included in the Allentown-Bethlehem-Easton, PA-NJ Metropolitan Statistical Area, which is also included in the New York-Newark, NY-NJ-CT-PA Combined Statistical Area. It is considered part of the state's Coal Region, though the eastern and northeastern sections are considered part of the Pocono Mountains. Some consider lower Carbon County, including Palmerton and Lehighton areas, as part of the Lehigh Valley.

Carbon County was created on March 13, 1843 from parts of Northampton and Monroe Counties and was named for the extensive deposits of coal in the region.

The first settlement in Carbon County was the Moravian mission Gnadenhutten, established in 1745. Deeply moved by the deplorable state of the Leni Lenape Indians in America, twelve Moravian missionaries left their home in Herrnhut Germany and traveled by sea to the wilderness of Pennsylvania, a place known for religious tolerance under the auspices of Count Zinzendorf. Located where Lehighton now stands, Gnadenhutten exemplified communal simplicity. Home to hundreds of Lenni Lenape (Delaware) and Mahican Indians. The mission was a scene of quiet, humble and unobtrusive heroism and the Indians' shelter. Although the wilderness of Carbon County was quite treacherous, the Moravians traveled in the wilds of Carbon County undaunted. By 1752, increased hostility put Gnadenhutten at risk for attack, but the missionaries' pious good works did not go unnoticed. The frankness and earnestness of the simple Moravians had won respect with the many tribes of Pennsylvania Indians, and they lived without incident until 1755.[4]

Carbon County is the location of the trials and executions of the controversial Molly Maguires, an Irish secret society that had been accused of terrorizing the region.

Carbon County has a rich history. Some interesting people have passed through her mountains, including the Moravian mystic Count Zinzendorf, Benjamin Gilbert, John James Audubon, Benjamin Franklin, and many more.

Blessed with a unique geography, Carbon County dazzled the adventurous travelers of the Victorian era, just as it attracts adventurers today. Aesthetically not much has changed of this unique landscape; written in 1877, the following passage is still valid today: "Such rough and tumble experience, climbing mountains, falling over rocks, exploring wild ravines, diving into coal mines, and riding on every description of conveyance which it has entered into the mind of man to run on." Home of the Lehigh Gorge State Park, Carbon County is an ideal place for hikers, cyclists, history buffs and adventurers.[4]

According to the U.S. Census Bureau, the county has a total area of 387 square miles (1,000 km2), of which 381 square miles (990 km2) is land and 5.9 square miles (15 km2) (1.5%) is water.[5] Blue Mountain forms the southern boundary of Carbon. The northeast area of the county is located in the Pocono Mountains and the northwest area includes portions of Broad Mountain and Spring Mountain. It is drained by the Lehigh River except for a small area in western Packer Township and the borough of Lansford that are drained by the Still Creek and Panther Creek, respectively, into the Little Schuylkill River and the Schuylkill River, and the Audenried area in the northwest corner that drains into the Susquehanna River via the Catawissa Creek. The Lehigh cuts a gorge between Jim Thorpe and White Haven which hosts the Lehigh Gorge State Park.

Carbon County is one of the most politically competitive counties in Pennsylvania. Republicans hold the commissioner majority while Democrats hold all county row offices. Al Gore carried it in 2000, and in 2004, Republican George W. Bush defeated Democrat John Kerry 49.99% to 48.81% or a margin of 296 votes.[12]

In 2008 it voted for Democrat Barack Obama over Republican John McCain by a close margin of 49.77% to 47.90% (507 votes.)[13] The other three statewide winners (Rob McCord for Treasurer, Jack Wagner for Auditor General, and Tom Corbett for Attorney General) also carried Carbon. [2] In 2012 Mitt Romney carried Carbon in the Presidential election. 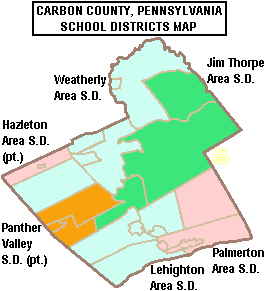 Mauch Chunk Lake is a county-run park that offers swimming, camping, hiking and cross country skiing in the winter. There are three Pennsylvania state parks in Carbon County. 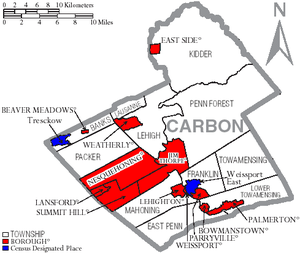 Under Pennsylvania law, there are four types of incorporated municipalities: cities, boroughs, townships, and, in the case of Bloomsburg, a town. The following boroughs and townships are located in Carbon County:

Main article: List of people from the Lehigh Valley