Cartersville is a city in Bartow County in the U.S. state of Georgia; it is located within the northwest edge of the Atlanta metropolitan area. As of the 2010 census, the city had a population of 19,731.[7] Cartersville is the county seat of Bartow County.[8]

Cartersville was first known as Birmingham to its original English settlers.[9] The town was incorporated as Cartersville in 1854.[9] The present name is for Col. F. Carter of Milledgeville.[10]

Cartersville was designated the seat of Bartow County in 1867 following the destruction of Cassville by Sherman in the American Civil War. Cartersville was incorporated as a city in 1872.[11]

Northern Bartow County is located in Dixie Tornado Alley and the area has been affected by a number of tornadoes in past years which have caused significant damage, primarily in the north and western sections of the county and in the communities of Adairsville, Rydal and Pinelog.

The Etowah River flows through a broad valley south of the downtown, leading west to Rome, where it forms the Coosa River, a tributary of the Alabama River. The city limits extend eastward, upriver, as far as Allatoona Dam, which forms Lake Allatoona, a large U.S. Army Corps of Engineers reservoir. Red Top Mountain State Park sits on a peninsula in the lake, just outside the city limits. Nancy Creek also flows in the vicinity.

Downtown Cartersville consists of several amenities such as shopping, theatres, museums, churches, and restaurants. This downtown district is very small and historic, which is what makes this small town invite-able. The Grand Theatre holds shows for several schools and companies, such as the Steps of Faith Dance Company and Cartersville City Ballet. There are also pageants and scholarship programs that are held here, such as Distinguished Young Women. Downtown Cartersville also has annual Christmas parades and monthly car shows.

The following communities border the city:

There were 5,870 households out of which 33.3% had children under the age of 18 living with them, 52.6% were married couples living together, 13.6% had a female householder with no husband present, and 29.6% were non-families. 25.9% of all households were made up of individuals and 11.7% had someone living alone who was 65 years of age or older. The average household size was 2.59 and the average family size was 3.10. 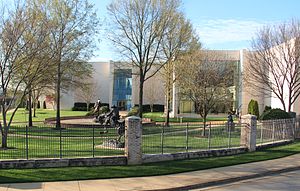 The schools that comprise the Cartersville City School System:

There is also a private Montessori school:

Cartersville also has a college campus:

Manufacturing, tourism, and services play a part in the economy of the city. The city's employers include:

The city has Cartersville Medical Center and The Hope Center, making it a minor healthcare hub for the surrounding area.[citation needed]