For a comprehensive list of potential causes, see List of causes of death by rate. For other uses, see cause of death (disambiguation).

In law, medicine, and statistics, the cause of death is the condition or conditions officially determined to have resulted in a human's death. In modern times, such a determination usually is essential data on a governmental death certificate.

International definition of 'cause of death'

In 1967, the Twentieth World Health Assembly defined the causes of death to be entered on the medical certificate of cause of death as “all those diseases, morbid conditions or injuries which either resulted in or contributed to death and the circumstances of the accident or violence which produced any such injuries”. The purpose of the definition is to ensure that all the relevant information is recorded and that the certifier does not select some conditions for entry and reject others. The definition does not include symptoms and modes of dying, such as heart failure or respiratory failure (International Classification of Diseases - WHO).

Underlying cause of death

It was agreed by the Sixth Decennial International Revision Conference 1948 that the cause of death for primary tabulation should be designated the underlying cause of death. From the standpoint of prevention of death, it is necessary to break the chain of events or to effect a cure at some point. The most effective public health objective is to prevent the precipitating cause from operating. For this purpose, the underlying cause has been defined as “(a) the disease or injury which initiated the train of morbid events leading directly to death, or (b) the circumstances of the accident or violence which produced the fatal injury”.

Current state of collection of causes of death

Mortality statistics are one of the principal sources of health information and in many countries they are the most reliable type of health data.

The principle of a cause of death and an underlying cause of death can be applied uniformly by using the medical certification form recommended by the World Health Assembly. It is the responsibility of the medical practitioner signing the death certificate to indicate which morbid conditions led directly to death and to state any antecedent conditions giving rise to this cause. The medical certificate shown below is designed to facilitate the selection of the underlying cause of death when two or more causes are recorded. Part I of the form is for diseases related to the train of events leading directly to death, and Part II is for unrelated but contributory conditions. 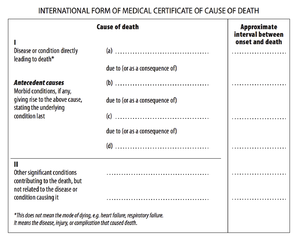 International form of medical certificate of cause of death

The medical practitioner or other qualified certifier should use his or her clinical judgement in completing the medical certificate of cause of death. Automated systems must not include lists or other prompts to guide the certifier as these necessarily limit the range of diagnoses and therefore have an adverse effect on the accuracy and usefulness of the report.

How to fill in a death certificate: Interactive Self Learning Tool (WHO)

Cause of Death on the Death Certificate: Quick Reference Guide (WHO) This guide is designed for double sided printing.

It is important to note that while verbal autopsy can be an essential public health tool for obtaining a reasonable direct estimation of the cause structure of mortality at a community or population level, it may not be an accurate method for attributing causes of death at the individual level.

Data sources for causes of death

Civil registration is the continuous, permanent, compulsory and universal recording of the occurrence and characteristics of events, including vital events, pertaining to the population, as provided by decree or regulation, in accordance with the legal requirements of a country (United Nations, 2001). While civil registration records are essential for administrative and legal purposes, they also provide a wealth of information for compiling vital statistics on a regular basis.

Sample vital registration (SVR), when applied in conjunction with validated verbal autopsy procedures and implemented in a nationally representative sample of population clusters, represents an affordable, cost-effective, and sustainable short- and medium-term solution for countries that do not have a well-functioning CRVS system. SVR complements other information sources by producing age-, sex-, and cause-specific mortality data that are more complete and continuous than those otherwise available. The tools and methods employed in an SVR system, however, are imperfect and require rigorous validation and continuous quality assurance. Nationally-representative sample-based vital registration systems have been operating in China, India, and Bangladesh for decades to obtain mortality and cause of death information. Sample vital registration with verbal autopsy (SAVVY) systems have been established more recently in Pakistan and Zambia. Tanzania, Malawi and Indonesia are in the process of implementing SAVVY. In addition, the last decade has seen considerable growth in longitudinal community studies, often called Health and Demographic Surveillance Systems (HDSS). The INDEPTH network is a collaboration of such local studies, which are often driven by research funding and provide mortality and cause of death statistics.

Household surveys provide detailed demographic and socio-economic data for households and individuals. Most countries now have systems of data collection for household surveys but with varying levels of experience and infrastructure. The surveys conducted by national statistical offices are generally multi-purpose or integrated in nature and designed to provide reliable data on a range of demographic and socio-economic characteristics of the various populations. For countries with an absence of routine medical certification of cause of death information, a variety of methods have been developed to incorporate verbal autopsy data into household surveys, in order to obtain a general idea of the leading causes of death in the population.

Hospitals should routinely collect information on causes of death by age and sex, in addition to information on pregnancy status and treatment status. Such data can form a good basis for cause-specific mortality statistics, which can help identify needs for hospital treatment and allow related planning of resources. It is important to note that in countries where the majority of deaths take place outside of health facilities, hospital mortality data may not be representative of the mortality burden of the population as a whole.

Burial systems consist of monitoring the number of people who are buried, determining cause of death, and calculating mortality trends using estimates about population sizes. There are several burial systems that may be used to estimate cause specific mortality fractions. These include the use of records as part of cemetery surveillance and burial societies, parish registries, and morgue surveillance with cadaver autopsy. Cadaver autopsy is most useful in settings where many people die in hospitals or morgue registration is high and where medical expertise is available to conduct autopsies. These autopsies can highlight unknown causes of death or contributions towards death - there has been a dramatic worldwide decline in these 'clinical' or 'hospital' autopsies over the past half century. [2] In 2013, only 0.7% of adult inpatient deaths were followed by 'hospital' autopsy. [3]

Cause of death data need to be aggregated for tabulation, and verified for plausibility. A range of tools is available from WHO.

ANACOD is an automated tool, which builds analytical capacity to assess the quality of mortality statistics. This electronic tool provides a step-by-step approach to quickly conduct a comprehensive analysis of data on mortality levels and causes of death. It automatically reviews the data for errors, tabulates the information, presents the results in the form of easy to use tables and charts, and provides the opportunity to compare the findings with those from other groups of countries. The tool is continuously improved by WHO based on feedback from users and in consultation with experts.

CoDEdit is an automated tool intended to help producers of cause-of-death statistics to strengthen their capacity in performing routine checks on their data in order to minimize errors. Its primary purpose is to warn and flag out basic gross errors, alert about possible misuse of codes and finally provide a summary of the data set. This WHO tool provides relatively simple ways of checking for the validity of each data record that would enable data collectors to improve their data significantly.