Causes of karma in Jainism

The karmic process in Jainism is based on seven truths or fundamental principles (tattva) of Jainism which explain the human predicament.[1] Out of those, four—influx (āsrava), bondage (bandha), stoppage (saṃvara) and release (nirjarā)—pertain to the karmic process.[1] Karma gets bound to the soul on account of two processes:

The āsrava, that is, the influx of karma occurs when the karmic particles are attracted to the soul on account of vibrations created by activities of mind, speech and body.[2] Tattvārthasūtra, 6:1–2 states: "The activities of body, speech and mind is called yoga. This three-fold action results in āsrava or influx of karma."[3] The karmic inflow on account of yoga driven by passions and emotions cause a long term inflow of karma prolonging the cycle of reincarnations. On the other hand, the karmic inflows on account of actions that are not driven by passions and emotions have only a transient, short-lived karmic effect.[4]

With a combination of any of the elements of the above four factors, there are 108 ways with which the karmas can be attracted to the soul.[6] Even a silent assent or endorsements of acts of violence done by someone else far away, have karmic consequences for the soul.[7] Hence, the scriptures advice carefulness in actions, awareness of the world, and purity in thoughts as a means to avoid the karmas.[8][9]

The karmas have effect only when they are bound to the consciousness. This binding of the karma to the consciousness is called bandha.[10] However, the yoga or the activities alone do not produce bondage. Out of the many causes of bondage, passion is considered as the main cause of bondage. The karmas are literally bound on account of the stickiness of the soul due to existence of various passions or mental dispositions.[2] The passions like anger, pride, deceit and greed are called sticky (kasayas) because they act like glue in making karmic particles stick to the soul resulting in bandha.[11] Hence the ancient Jain texts talk of subduing these negative emotions:[12]

When he wishes that which is good for him, he should get rid of the four fault—anger, pride, deceit and greed—which increase the evil. Anger and pride when not suppressed, and deceit and greed when arising: all these four black passions water the roots of re-birth.

File:Soul Attracting Karma.jpg
Karmas are attracted by the activity of mind, speech and body influenced by various passions.

According to Tattvārthasūtra, the causes of karmic bondage—in the order they are required to be eliminated by a soul for spiritual progress—are:

Each cause presupposes the existence of the next cause, but the next cause does not necessarily pre-suppose the existence of the previous cause.[14] A soul is able to advances on the spiritual ladder called guṇasthāna, only when it is able to eliminate the above causes of bondage one by one. Duration and intensity of the karmic bond are determined by "Kaṣāya" and type and quantity of the karmas bound depends on yoga.[16]

Causes of different types of karmas

Jñānavāraṇa and darśanāvaraṇa karma are knowledge obscuring and perception obscuring. They are caused by:[17] 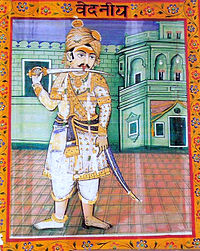 Vediniya karma: Pain and Pleasure is induced on account of licking honey from the sword

Asātāvedanīya karma is bound on account of causing to other or oneself the following:[18]

Sātāvedanīya karma is bound on account of causing to other or oneself the following:[19]

Mohanīya karmas produce a delusion in a soul i.e. the soul is not able to distinguish between right and wrong. They are of two subtypes—Darśana-mohanīya (Perception delusion) and cāritra-mohanīya (conduct deluding) karmas.[20]

The causes of lifespan determining karmas

The āyu karmas are the life span determining karmas and they determine the next destiny or reincarnation of a soul. Accordingly, as per the next reincarnations lifespan determined, a soul takes birth in either hell, heaven, animal kingdom or as a human (this list is not exhaustive).[21]

Causes of the Narakayus karma or birth in hells

Following reasons result in birth in naraka or hells:

Causes of the Tiryagayus karma or birth as animals

Causes of Manusyayus karma or birth as human

Causes of the Devayus karma or birth in Heavens

Practicing vows and austerities normally leads to destruction of karmas and of attainment of moksa or liberation, but in above cases leads to merit and birth in heavens as demi-gods for a long but finite period of time.

The nāma karmas or body determining karmas are of two types—asubha and subha nama karmas i.e. auspicious and inauspicious karmas. Their causes are:[22]

The gotra karma or status determining karma is of two types:[23]

The causes of inflow of obstructing or antarāya karma are—causing obstruction to others or intending to place or placing obstacles before others in their attempts towards beneficence, gain, satisfaction, comfort and power.[24]