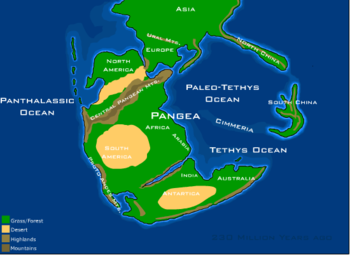 Map of Pangaea, including the Central Pangean Mountains.

The Central Pangean Mountains were an extensive northeast-southwest trending mountain range in the central portion of the supercontinent Pangaea during the Triassic period. They were formed as a result of collision between the minor supercontinents Laurussia and Gondwana during the formation of Pangaea.[1] Remnants of this massive mountain range include the Appalachian Mountains of North America, the Little Atlas of Morocco, Africa and much of the Scottish Highlands including Ben Nevis.

A number of mountain building periods were involved in the formation of the Central Pangean Mountains, including the Acadian, Caledonian, Alleghenian and Mauritanide orogenies.