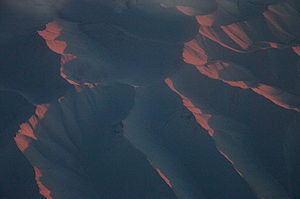 The Central Siberian Plateau (Russian: Среднесиби́рское плоского́рье) is made up of sharply demarcated surfaces of varying altitudes occupying most of Siberia between the Yenisei and Lena rivers. It extends over an area of 3.5 million km². The highest point is the Putoran Mountains rising to 1701 m. To the north of the plateau are the Putoran Mountains while to the south are the Eastern Sayan and the Baikal Mountains. To the east the plateau gives way to the low-lying land of the Yakuts. The Central Siberian Plateau covers one-third of Siberia.[1]

The climate is continental with short warm summers and long and very cold winters. Most of the territory is covered with conifer forests (larch is especially abundant). The plateau's major river is the Lower Tunguska. Known geologically as the Siberian Traps, mineral resources here are very rich and include coal, iron ore, gold, platinum, diamonds and natural gas.