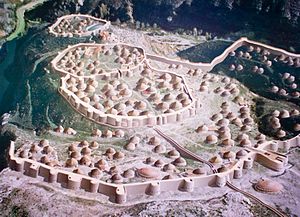 The Chalcolithic (English /ˌkælkəlˈlɪθɪk/;[1] Greek: χαλκός khalkós, "copper" and λίθος líthos, "stone")[1] period or Copper Age,[1] also known as the Eneolithic[1] or Æneolithic (from Latin aeneus "of bronze"), is a phase of the Bronze Age before it was discovered that adding tin to copper formed the harder bronze. The Copper Age was originally defined as a transition between the Neolithic and the Bronze Age. However, because it is characterized by the use of metals, the Copper Age is considered a part of the Bronze Age rather than the Stone Age.

The archaeological site of Belovode on the Rudnik mountain in Serbia contains the world's oldest securely dated evidence of copper smelting at high temperature, from 5,000 BCE.[2][3]

The multiple names result from multiple recognitions of the period. Originally the term "Bronze Age" meant that either copper or bronze was being used as the chief hard substance for the manufacture of tools and weapons. In 1881, John Evans, recognizing that the use of copper often preceded the use of bronze, distinguished between a transitional Copper Age and the Bronze Age proper. He did not include this transitional period in the tripartite system of Early, Middle and Late Bronze Age but placed it at the beginning outside of it. He did not, however, present it as a fourth age, but chose to retain the traditional three-age system.[citation needed]

In 1884, Gaetano Chierici, perhaps following the lead of Evans, renamed it in Italian as the Eneo-litica, or "Bronze-stone" transition. This phrase was never intended to mean that the period was the only one in which both bronze and stone were used. The Copper Age features the use of copper, excluding bronze; moreover, stone continued to be used throughout both the Bronze Age and the Iron Age. "Litica" simply names the Stone Age as the point from which the transition began and is not another -lithic age. The Eneolithic was never part of the Stone Age, which ended conclusively the moment the first smelter succeeded in obtaining copper from copper ore for the first time.[citation needed]

Subsequently British scholars used either Evans's "Copper Age" or the term "Eneolithic" (or Aeneolithic), a translation of Chierici's eneo-litica. After several years, a number of complaints appeared in the literature that "Eneolithic" seemed to the untrained eye to be produced from e-neolithic, "outside the Neolithic," clearly not a definitive characterization of the Copper Age. About the year 1900, many writers began to substitute "Chalcolithic" for Eneolithic, to avoid the false segmentation. It was at this time that the misunderstanding began among those who had not understood the Italian. The -lithic was seen as a new -lithic age, a part of the Stone Age in which copper was used, which may appear paradoxical. Today Copper Age, Eneolithic and Chalcolithic are used synonymously to mean Evans's original definition of Copper Age.[citation needed]

The period is a transitional one, but does not stand outside the traditional three-age system. The analysing stone tool assemblages from sites on the Tehran Plain in Iran has illustrated the effects of the introduction of copper working technologies on the in place systems of lithic craft specialists and raw materials. Networks of exchange and specialized processing and production that had evolved during the Neolithic seem to have collapsed by the Middle Chalcolithic (c 4500-3500 BCE) and been replaced by the use of local materials by a primarily household base production of stone tools.[4] It appears that copper was not widely exploited at first, and that efforts in alloying it with tin and other metals began quite soon, making it difficult to distinguish the distinct Chalcolithic cultures from later periods. The boundary between the Copper and Bronze Ages is indistinct, since alloys faded in and out of use due to the erratic supply of tin.[citation needed]

The emergence of metallurgy may have occurred first in the Fertile Crescent, where it gave rise to the Bronze Age in the 4th millennium BCE (the traditional view), though finds from the Vinča culture in Europe have now been securely dated to slightly earlier than those of the Fertile Crescent. There was an independent invention of copper and bronze smelting first by Andean civilizations in South America extended later by sea commerce to the Mesoamerican civilization in West Mexico (see Metallurgy in pre-Columbian America and Metallurgy in pre-Columbian Mesoamerica).

The literature of European archaeology, in general, avoids the use of 'chalcolithic' (the term 'Copper Age' is preferred), whereas Middle Eastern archaeologists regularly use it. The Copper Age in the Middle East and the Caucasus began in the late 5th millennium BCE and lasted for about a millennium before it gave rise to the Early Bronze Age. The transition from the European Copper Age to Bronze Age Europe occurs about the same time, between the late 5th and the late 3rd millennia BCE.

According to Parpola,[5] ceramic similarities between the Indus Civilization, southern Turkmenistan, and northern Iran during 4300–3300 BCE of the Chalcolithic period (Copper Age) suggest considerable mobility and trade.

Main articles: Chalcolithic Europe and Metallurgy during the Copper Age in Europe

An archaeological site in Serbia contains the oldest securely dated evidence of copper making at high temperature, from 7,500 years ago. The find in June 2010 extends the known record of copper smelting by about 800 years, and suggests that copper smelting may have been invented in separate parts of Asia and Europe at that time rather than spreading from a single source.[3] In Serbia, a copper axe was found at Prokuplje, which indicates that humans were using metals in Europe by 7,500 years ago (~5,500 BCE), many years earlier than previously believed.[6] Knowledge of the use of copper was far more widespread than the metal itself. The European Battle Axe culture used stone axes modeled on copper axes, even with imitation "mold marks" carved in the stone.[7] Ötzi the Iceman, who was found in the Ötztal Alps in 1991 and whose remains were dated to about 3300 BCE, was found with a Mondsee copper axe. 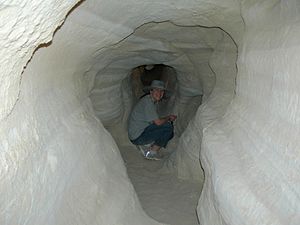 Examples of Chalcolithic cultures in Europe include Vila Nova de São Pedro and Los Millares on the Iberian Peninsula.[8] Pottery of the Beaker people has been found at both sites, dating to several centuries after copper-working began there. The Beaker culture appears to have spread copper and bronze technologies in Europe, along with Indo-European languages.[9]

In Bhirrana, the earliest Indus site, copper bangles and copper arrowheads were found. The inhabitants of Mehrgarh in present day Pakistan fashioned tools with local copper ore (ore used as pigment) between 7000–3300 BCE.[10][citation needed] Nausharo site dated to 4500 years ago, a pottery workshop in province of Baluchistan, Pakistan, unearthed 12 blades or blade fragments. The dimensions of these blades are: length 12–18 cm, width 12–20 mm and relatively thin in thickness. The archaeological experiments show that these blades were made with copper indentor, and functioned as potter's tool to trim and shape unfired pottery. Petrographic analysis indicates local pottery manufacturing, but also reveals that existence of few exotic black-slipped pottery from Indus Valley.[11]

5th millennium BCE copper artifacts start to appear in East Asia, such as Jiangzhai and Hongshan culture, but those metal artifacts were not widely used.

Timna Valley contains evidence of copper mining 9,000 to 7,000 years ago. The process of transition from Neolithic to Chalcolithic in the Middle East is characterized in archaeological stone tool assemblages by a decline in high quality raw material procurement and use. This dramatic shift is seen throughout the region, including the Tehran Valley, Iran. Here, analysis of six archaeological sites determined a marked downward trend in not only material quality, but also in aesthetic variation in the lithic artefacts. Fazeli et al. use these results as evidence of the loss of craft specialisation caused by increased use of copper tools.[12]

North Africa and the Nile Valley imported its iron technology from the Near East and followed the Near Eastern course of Bronze Age and Iron Age development. However the Iron Age and Bronze Age occurred simultaneously in much of Africa. The earliest dating of iron in Sub-Saharan Africa is 2500 BCE at Egaro, west of Termit, making it contemporary to the Middle East.[13] The Egaro date is debatable with archaeologists, due to the method used to attain it.[14] The Termit date of 1500 BCE is widely accepted.

In the region of the Aïr Mountains in Niger, we have the development of independent copper smelting between 3000–2500 BCE. The process was not in a developed state, indicating smelting was not foreign. It became mature about 1500 BCE.[15] d

The term is also applied to American civilizations that already used copper and copper alloys thousands of years before the European migration. Besides cultures in the Andes and Mesoamerica, the Old Copper Complex, centered in the Upper Great Lakes region – present-day Michigan and Wisconsin in the United States – mined and fabricated copper as tools, weapons, and personal ornaments.[16] The evidence of smelting or alloying that has been found is subject to some dispute and a common assumption by archaeologists in that objects were cold-worked into shape. Artifacts from some of these sites have been dated from 4000 to 1000 BCE, making them some of the oldest Chalcolithic sites in the entire world.[17] Furthermore, some archaeologists find artifactual and structural evidence of casting by Hopewellian and Mississippian peoples to be demonstrated in the archaeological record.[18]