Sir Charles Algernon Parsons, OM, KCB, FRS (13 June 1854 – 11 February 1931) was a British engineer, best known for his invention of the compound steam turbine.[1] He worked as an engineer on dynamo and turbine design, and power generation, with great influence on the naval and electrical engineering fields. He also developed optical equipment, for searchlights and telescopes.

Parsons was born in London into an Anglo-Irish family,[2][3][4] youngest son of the famous astronomer William Parsons, 3rd Earl of Rosse. The family seat is Birr Castle, County Offaly, Ireland, and the town of Birr was called Parsonstown, after the family, from 1620 to 1899.

With his three brothers, Parsons was educated at home in Ireland by private tutors,[5] all of whom were well versed in the sciences and also acted as practical assistants to the Earl in his astronomical work. One of them later became, as Sir Robert Ball, Astronomer Royal for Ireland. Parsons then read mathematics at Trinity College, Dublin and St. John's College, Cambridge, graduating from the latter in 1877 with a first-class honours degree.[6] He joined the Newcastle-based engineering firm of W.G. Armstrong as an apprentice, an unusual step for the son of an earl; then moved to Kitsons in Leeds where he worked on rocket-powered torpedoes; and then in 1884 moved to Clarke, Chapman and Co., ship engine manufacturers near Newcastle, where he was head of their electrical equipment development. He developed a turbine engine there in 1884 and immediately utilized the new engine to drive an electrical generator, which he also designed. Parsons' steam turbine made cheap and plentiful electricity possible and revolutionised marine transport and naval warfare.[7]

Another type of steam turbine at the time, invented by Gustaf de Laval, was an impulse design that subjected the mechanism to huge centrifugal forces and so had limited output due to the weakness of the materials available. Parsons explained that his appreciation of the scaling issue led to his 1884 breakthrough on the compound steam turbine in his 1911 Rede Lecture:

"It seemed to me that moderate surface velocities and speeds of rotation were essential if the turbine motor was to receive general acceptance as a prime mover. I therefore decided to split up the fall in pressure of the steam into small fractional expansions over a large number of turbines in series, so that the velocity of the steam nowhere should be great...I was also anxious to avoid the well-known cutting action on metal of steam at high velocity."[8]

In 1889, he founded C. A. Parsons and Company in Newcastle to produce turbo generators to his design.[9] In the same year he set up the Newcastle and District Electric Lighting Company (DisCO). In 1890, DisCo opened Forth Banks Power Station, the first power station in the world to generate electricity using turbo generators.[10] In 1894 he regained certain patent rights from Clarke Chapman. Although his first turbine was only 1.6% efficient and generated a mere 7.5 kilowatts, rapid incremental improvements in a few years led to his first megawatt turbine built in 1899 for a generating plant at Elberfeld, Germany.[8]

Parsons was also interested in marine applications and founded the Parsons Marine Steam Turbine Company in Newcastle. Famously, in June 1897, his turbine-powered yacht, Turbinia, was exhibited moving at speed at Queen Victoria's Diamond Jubilee Fleet Review off Portsmouth, to demonstrate the great potential of the new technology. The Turbinia moved at 34 knots. The fastest Royal Navy ships using other technologies reached 27 knots. Part of the speed improvement was attributable to the slender hull of the Turbinia.[11] 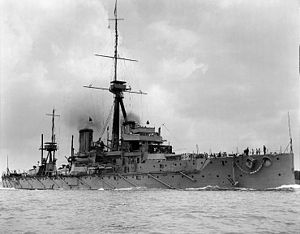 Dreadnought. In 1906, it was the first modern battleship and was fastest in the world due to Parsons' steam turbines.

The Parsons turbine company survives in the Heaton area of Newcastle and is now part of Siemens, a German conglomerate. Sometimes referred to as Siemens Parsons, the company recently completed a major redevelopment programme, reducing the size of its site by around three quarters and installing the latest manufacturing technology. In 1925 Charles Parsons acquired the Grubb Telescope Company and renamed it Grubb Parsons. That company survived in the Newcastle area until 1985.

Parsons was also known for inventing the Auxetophone, an early compressed air gramophone.[16]

Parsons' ancestral home at Birr Castle in Ireland houses a museum detailing the contribution the Parsons family have made to the fields of science and engineering, with part of the museum given over to marine engineering work of Charles Parsons.

Charles Algernon Parsons died on 11 February 1931, on board the steamship Duchess of Richmond while on a cruise with his wife. The cause of death was given as neuritis.[18] A memorial service was held at Westminster Abbey on 3 March 1931. Parsons was buried in the parish church of St Bartholomew's in Kirkwhelpington in Northumberland.

His widow, Katharine, died at her home in Ray Demesne, Kirkwhelpington, Northumberland in 1933.[19] Rachel Parsons died in 1956; stableman Denis James Pratt was convicted of her manslaughter.[20]

In 1919 Katharine and her daughter co-founded the Women's Engineering Society, which is still in existence today.[21]

Published Works Online and other works of interest