Born at Richmond House, London, he was the son of Charles Lennox, 5th Duke of Richmond and Lennox and Lady Caroline, daughter of Field Marshal Henry Paget, 1st Marquess of Anglesey. He was educated at Westminster and Christ Church, Oxford, where he had a short career as a cricketer. He served in the Royal Horse Guards and was aide-de-camp to the Duke of Wellington.

March entered politics as member for Sussex West in 1841. He was sworn of the Privy Council in 1859. In 1860, he succeeded his father as Duke of Richmond and entered the House of Lords. He chaired the Royal Commission on Capital Punishment, which reported in 1866, and the Royal Commission on Water Supply in 1869, which concluded that there was a need for some sort of overall planning of water supplies for domestic use.[1] He was made a Knight of the Garter in 1867, and filled various positions in government. He was also Chancellor of the University of Aberdeen from 1861 until his death at Gordon Castle in 1903. 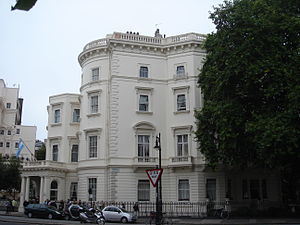