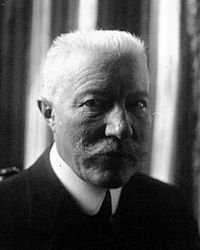 Born into a bourgeois family in Fléchin, Pas-de-Calais, Charles Jonnart was educated at Saint-Omer, then in Paris. Interested in the Algeria that he had visited as a young man, he was appointed in 1881 by Léon Gambetta to the office of Governor General of Algeria. In 1884, he was appointed director of the department's Algeria to the Ministry of Interior.

Beginning a political career as a liberal, he was elected in 1886 as General Counsel of Saint-Omer, then in 1889, member of Pas-de-Calais. He distinguished himself in the House by his frequent interventions on colonial issues including the organization of Algeria.

Chosen in 1893 by Casimir Périer for the post of Minister of Public Works, he was elected in 1894 as Senator Pas-de-Calais. The same year an automobile accident forced him to stop his ministry.

During 1900, he returned to Algeria, where he was appointed Governor-General. He resigned for health reasons but in 1903 again returned to his post. He helped promote the career of the future Marshal Hubert Lyautey. The latter, still colonel, was promoted to general and was entrusted by Jonnart with policy implementation in the region.

In 1911, Charles Jonnart was appointed as foreign minister in the cabinet of Aristide Briand. During the First World War, he was the Senate rapporteur of the Committee on Foreign Affairs. He was briefly Minister of Blockade in the government of Clemenceau. Then the Allied Powers chose him as the authorized representative of King Constantine of Greece, to force him to abdicate.

After the war, he became chairman of the Democratic Republican Party in 1920, and was then appointed ambassador of France to the Holy See, with the delicate mission to resume diplomatic relations with the Pope. He was elected to the Académie française on April 19, 1923.

There is an interesting account of Jonnart's (who as former Governor General of Algeria had come to Greece) ultimatum on 11 June 1917 by which King Constantine was forced to leave his country and to live in exile in Switzerland, composed by Despina Geroulanis-Streit, Erinnerungen, Athens: privately printed 1981, pp. 64–69.