Charlestown is the oldest neighborhood in Boston, Massachusetts, United States.[1] Originally called Mishawum by the Massachusett, it is located on a peninsula north of the Charles River, across from downtown Boston, and also adjoins the Mystic River and Boston Harbor. Charlestown was laid out in 1629 by engineer Thomas Graves, one of its early settlers, in the reign of Charles I of England. It was originally a separate town and the first capital of the Massachusetts Bay Colony.

Charlestown became a city in 1848 and was annexed by Boston on January 5, 1874. With that, it also switched from Middlesex County, to which it had belonged since 1643, to Suffolk County. It has had a substantial Irish American population since the migration of Irish people during the Great Irish Famine of the 1840s. Since the late 1980s the neighborhood has changed dramatically because of its proximity to downtown and its colonial architecture. A mix of Yuppie and Upper-middle class gentrification has overtaken much of the area, as it has in many of Boston's neighborhoods, but Charlestown still maintains a strong Irish American population and "Townie" identity. 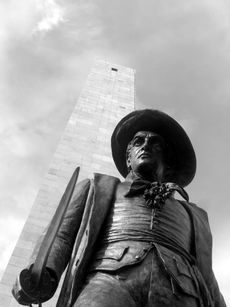 Thomas and Jane Walford[2] were the original English settlers of Mishawaum (later Charlestown); they settled there in 1624. They were given a grant by Sir Robert Gorges, with whom they had settled at Wessagusset (Weymouth) in September 1623. John Endicott, first governor of Massachusetts Bay Colony, had sent William, Richard and Ralph Sprague to Mishawaum to lay out a settlement. Thomas Walford, acting as an interpreter with the Massachusetts Indians, negotiated with the local sachem Wonohaquaham for Endicott and his people to settle there. Although Walford had a virtual monopoly on the region's available furs, he welcomed the newcomers and helped them in any way he could, unaware that his Episcopalian religious beliefs would cause him to be banished from Massachusetts to Portsmouth, New Hampshire within three years.

Originally a Puritan English city during the Colonial era (a time to which many of the neighborhood's structures date), Charlestown was founded in 1628, and settled July 4, 1629, by Thomas Graves,[3] Increase Nowell, Simon Hoyt, Rev. Francis Bright, Ralph, Richard and William Sprague and about 100 others who preceded the Great Migration. John Winthrop's company stopped here for some time in 1630, before deciding to settle across the Charles River at Boston. 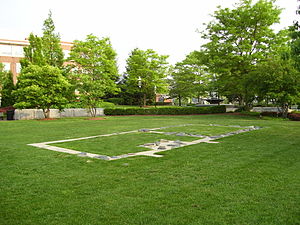 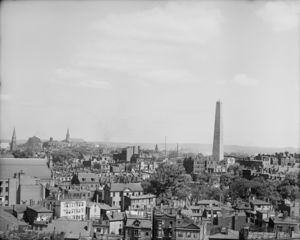 Birdseye view of Boston, Charlestown, and Bunker Hill, between 1890 and 1910

The territory of Charlestown originally included what is now Melrose and Malden (both until 1649),[4] Stoneham (until 1725),[5] Somerville (until 1842), Medford, Everett, Woburn, Burlington, and parts of Arlington and Cambridge.[6]

On June 17, 1775 the Charlestown Peninsula was the site of the Battle of Bunker Hill. Much of the battle took place on Breed's Hill, which overlooked the harbor and the town and was only about 400 yards from the southern end of the peninsula; Bunker Hill is near the northwest end of the peninsula, close to Charlestown Neck and about a mile from the Charles River. The town, including its wharves and dockyards, was destroyed by fire during the battle.

Around the 1860s an influx of Irish immigrants arrived in Charlestown. The neighborhood remained an Irish stronghold in the cultural, economic, and Catholic traditions of neighborhoods like South Boston, Somerville, and Dorchester. The city developed a water supply from the Mystic Lakes.[7] On October 7, 1873, a vote was held to determine whether Charlestown should leave Middlesex County and join Boston as part of Suffolk County; Boston residents approved the question, 5960–1868, and Charlestown residents also approved, 2240-1947.[8]

During the early 1960s, the city initiated plans to demolish and redevelop sixty percent of the housing in Charlestown.[9] In 1963, the Boston Redevelopment Authority (BRA) held a town meeting to discuss their development plans with the community. The BRA's dealings with Boston's West End had created an atmosphere of distrust towards urban renewal in Boston, and Charlestown residents opposed the plan by an overwhelming majority. By 1965, the plan had been reduced to tearing down only eleven percent of the neighborhood, as well as the removal of the elevated rail tracks.[10]

Throughout the 1960s until the middle 1990s, Charlestown was infamous for its Irish Mob presence. Charlestown's McLaughlin Brothers were involved in a gang war with neighboring Somerville's Winter Hill Gang, during the Irish Mob Wars of the 1960s. In the late 1980s, however, Charlestown underwent a massive Yuppie gentrification process similar to that of the South End. Drawn to its proximity to downtown and its colonial, red-brick, row-house housing stock, similar to that of Beacon Hill, many Yuppie and upper-middle class professionals moved to the neighborhood. In the late 1990s, additional gentrification took place, similar to that in neighboring Somerville.[citation needed] Today the neighborhood is a mix of Yuppies, upper-middle and middle-class residences, housing projects, and a large working class Irish-American demographic and culture that is still predominant.[citation needed]. 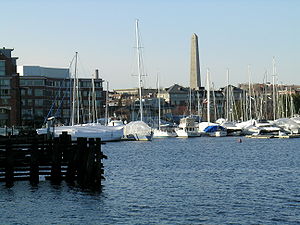 Charlestown is located north of downtown Boston on a peninsula extending southeastward between the Charles River and the Mystic River. The geographic extent of the neighborhood has changed dramatically from its colonial ancestor. Landfill operations have expanded much of Boston, lowering hills, and have expanded Charlestown, eliminating the narrow Charlestown Neck that connected the northwest end of the Charlestown Peninsula to the mainland. The original territory also included present-day Somerville, which was incorporated as a separate town in 1842, and the northern part of Arlington. At the time, the Charlestown Peninsula was urbanizing, while Somerville was still largely rural.

Thompson Square is located at the confluence of Main Street, Dexter Row, Green Street, and Austin Street. It was also formerly a stop on the Charlestown Elevated.

The Massachusetts Department of Correction operated the Charlestown State Prison until its closure in 1955. The former prison site is occupied by Bunker Hill Community College.[11]

The Boston Navy Yard was located in Charlestown from 1801 until it was closed in 1974.

Charlestown is well served by public transportation. On the MBTA Orange Line, the Community College station serves the center of the town and the Sullivan Square station serves the area near the Charlestown Neck. Two bus lines serve Charlestown. Both routes start at Sullivan Square and travel to the Financial District. The 93 bus travels along Bunker Hill Street,[13] and the 92 bus travels along Main Street.[14] The MBTA also operates a ferry between the Charlestown Navy Yard Ferry Terminal and Long Wharf (near the New England Aquarium),[15] making this a popular choice among both commuters and tourists.[16] 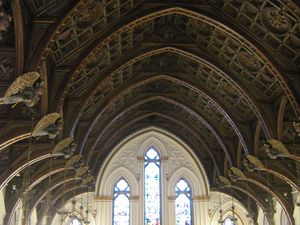 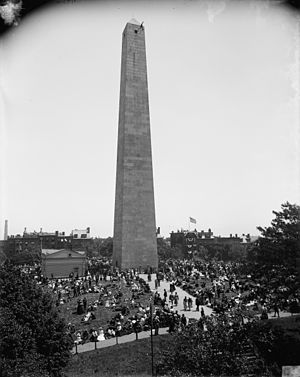 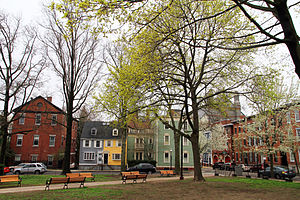 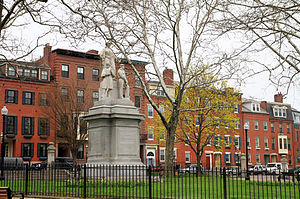 Charlestown contains several places of historical interest, many of which are marked by the northern end of Boston's Freedom Trail. The Freedom Trail ends at the Bunker Hill Monument commemorating the famous Battle of Bunker Hill. The USS Constitution, the oldest commissioned vessel in the US Navy, is docked in the Charlestown Navy Yard. Charlestown was also the location from which Paul Revere began his famous "midnight ride" before the Battles of Lexington and Concord. A restaurant opened in 1780 and still in operation, Warren Tavern, claims to have been one of Revere's favorite taverns. Of Charlestown's churches, St. Mary's (1887–1893) is considered one of the masterpieces of Patrick Keely. In St. John's Episcopal Church, on Devens St, the central stained glass above the altar is a notable work of William James McPherson, a Boston designer who later designed the stained glass for the Connecticut State Capitol.[17]

Boston Public Library operates the Charlestown Branch. The library first opened in the Warren Institution for Savings building on January 7, 1862. The library moved to a larger space in the new Charlestown City Hall in 1869. In 1913 the branch moved to the intersection of Monument Avenue and Monument Square, in proximity to the Bunker Hill Monument. The branch moved to its current location in 1970.[23]

Charlestown is home to several organizations and non-profits, including

The 1998 Independent drama "Monument Ave." directed by Ted Demme stars Denis Leary as Bobby O'Grady; an Irish-American criminal who becomes conflicted when the code of silence puts his loyalty and sense of self-preservation to the test after his two young and close cousins, also fellow criminals, are brutally gunned down by their boss.

Charlestown was also the setting for the 2010 action-thriller The Town, directed by and starring Ben Affleck, which follows the lives of a group of Boston bank robbers and the law enforcement personnel attempting to stop them.[24]

The Bunker Hill housing development, an area known for its crime and drug use, is featured on the front cover of Blood for Blood's album "Serenity".

Other movies that were set in or filmed in Charlestown include:[25]

But the jury they found me guilty,
And the judge he wrote it down,
"For breaking of the Union Bank,
You are sent to Charlestown."